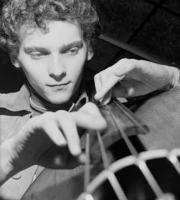 See the gallery for quotes by Miroslav Vitous. You can to use those 6 images of quotes as a desktop wallpapers. 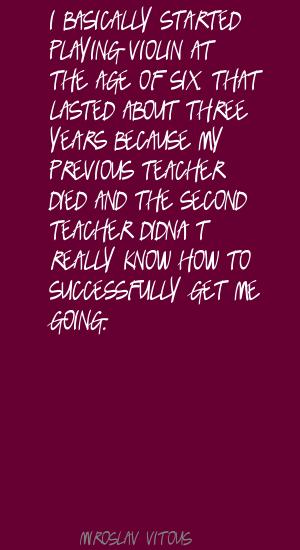 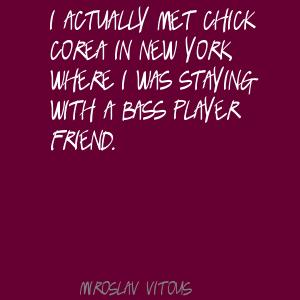 I basically started playing violin at the age of six. That lasted about three years because my previous teacher died and the second teacher didn't really know how to successfully get me going.

There is no roles. No one is keeping any roles. The drummer is also answering everybody and everything. So it is a constant conversation and communication between musicians on an extremely high level with extremely valuable material, motifs, and melodies.

Tags: Between, Everybody, High

But I have returned to one hundred percent playing this year. I am fully back to playing full time.

I actually met Chick Corea in New York, where I was staying with a bass player friend.

I am a Slavic musician and it is deeply inside of me.

I am more of a solo bass player and he needed somebody who would keep the role.

I took it very seriously and got very far with it. I was pretty much on a high level when I arrived.

Miles Davis had me play and he hired me the following week and after that, everything broke wide open.

So the whole basis for jazz music is based on the fact that the bass player could not play his instrument.

The money in the schools overpowers the principles of the purpose.

I am touring in Europe. I am putting together a trio and a quartet. I am playing solo concerts with my symphonic sounds. I am very much engaged back to playing and recording and everything.

I continued studying by myself in the field of jazz with my own technique of improvisation, walking bass lines, rhythms, all kinds of stuff, which I created for myself.

I did extensive, extensive recordings and made a classical CD-ROM set, which is still on the market. For ten years, it was by itself as the cream of the crop of samples.

I had a vision how it should sound and I put all my knowledge into this product and it is a fantastic product. People still tell me that I have the best musical thing there.

I thought it was time to get a group together and the first person I thought of was Wayne Shorter. I called Wayne and in the meantime, Wayne called me to make an album with him, which was Super Nova.

I was pretty much prepared because I was already playing in extremely good ways when I arrived from Europe because I played jazz four or five years before I arrived here.

I was very much fascinated with the technology we had that we could edit in the computer our compositions, but all the sounds that were available on the market were crap.

So I am one of those bass players who can do something and musically, it was back then and now it is even more, if you noticed on the new album, I am not playing all the time anymore.

So our ears got used to listening to jazz in the place that it was that the bass player could not play. No one really realized it and really addressed it until the bass players who could play their instrument came along and started doing something with it.

That was really so upsetting when you are trying to pass on some very serious knowledge and be basically, treated worse than a student coming off the street because his father pays the tuition. Come on. Give me a break. This is no school. This is a joke.

Much more quotes by Miroslav Vitous below the page.

The main thing that those two albums have in common aside from my music, which of course, a sense of it, you can recognize, it is that the bass on Infinite Search was playing much, much less like a bass.

There was the best teachers from the Czech Philharmonic, highly dedicated people, some of the best musicians in the world passing on the knowledge about the country, about the principles, and about the music.

Tags: Knowledge, Someone, Why