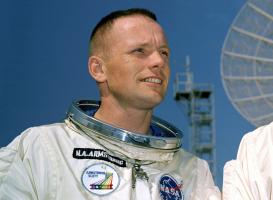 See the gallery for quotes by Neil Armstrong. You can to use those 8 images of quotes as a desktop wallpapers. 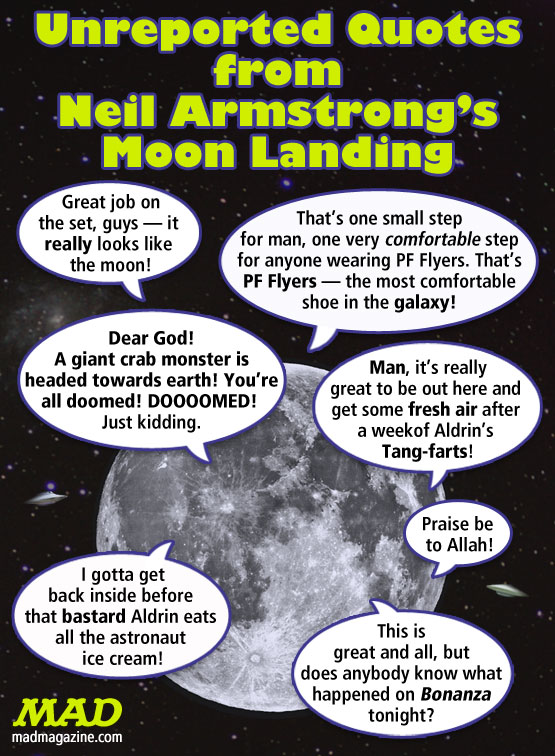 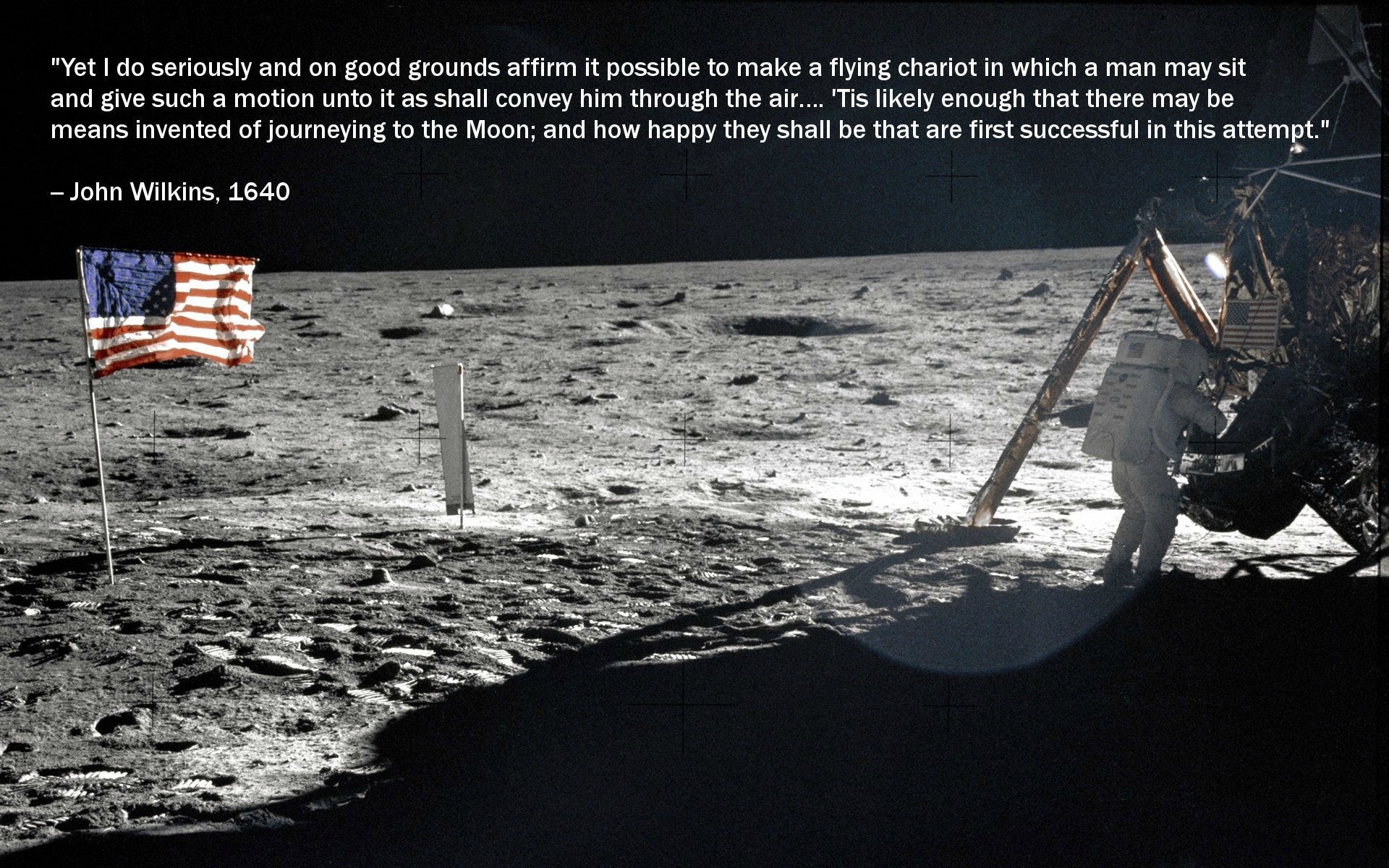 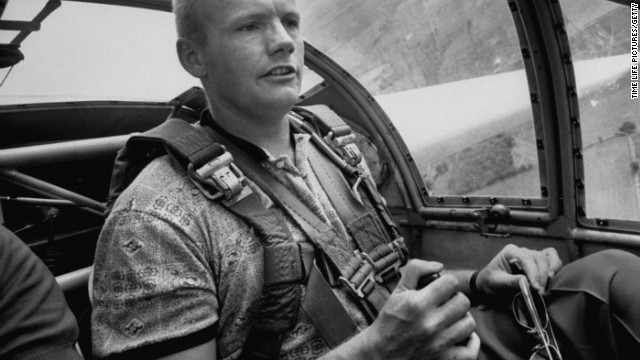 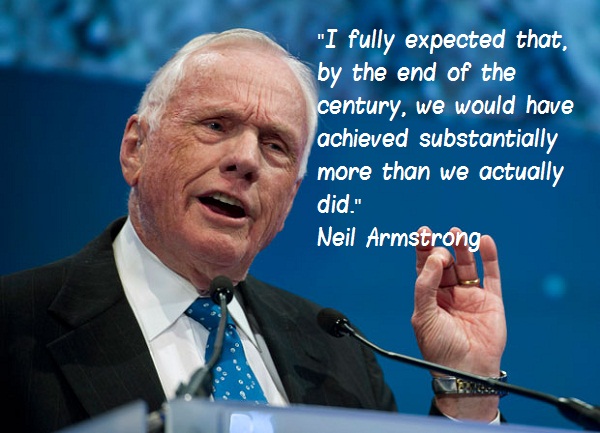 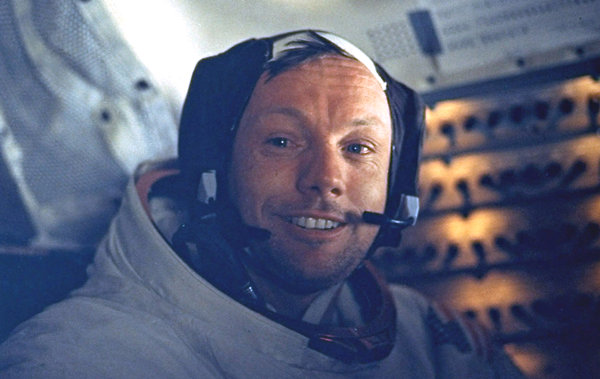 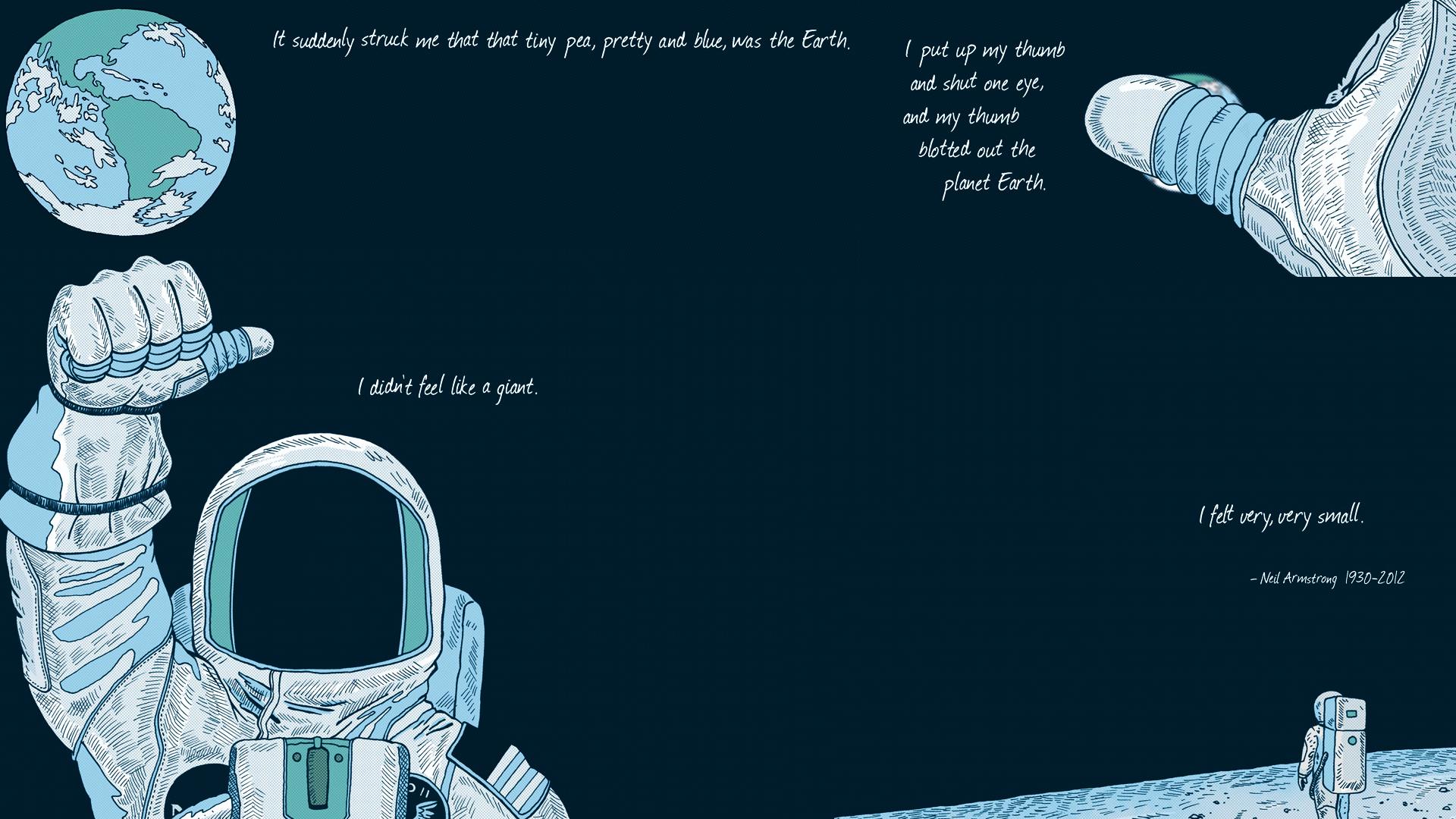 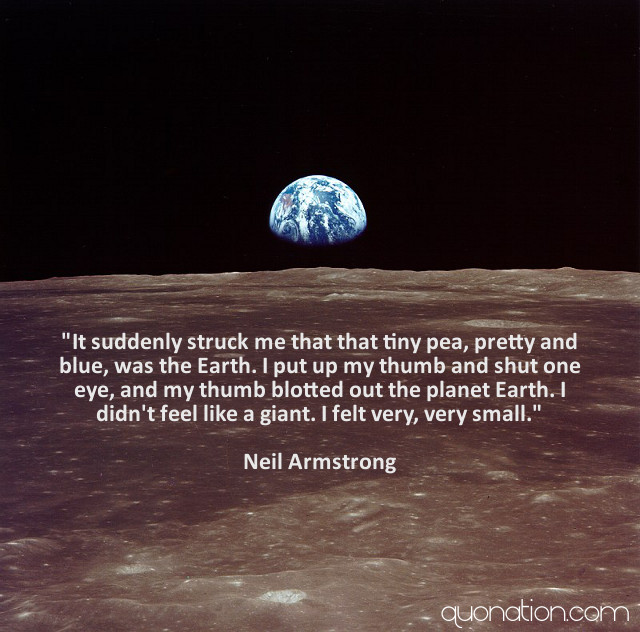 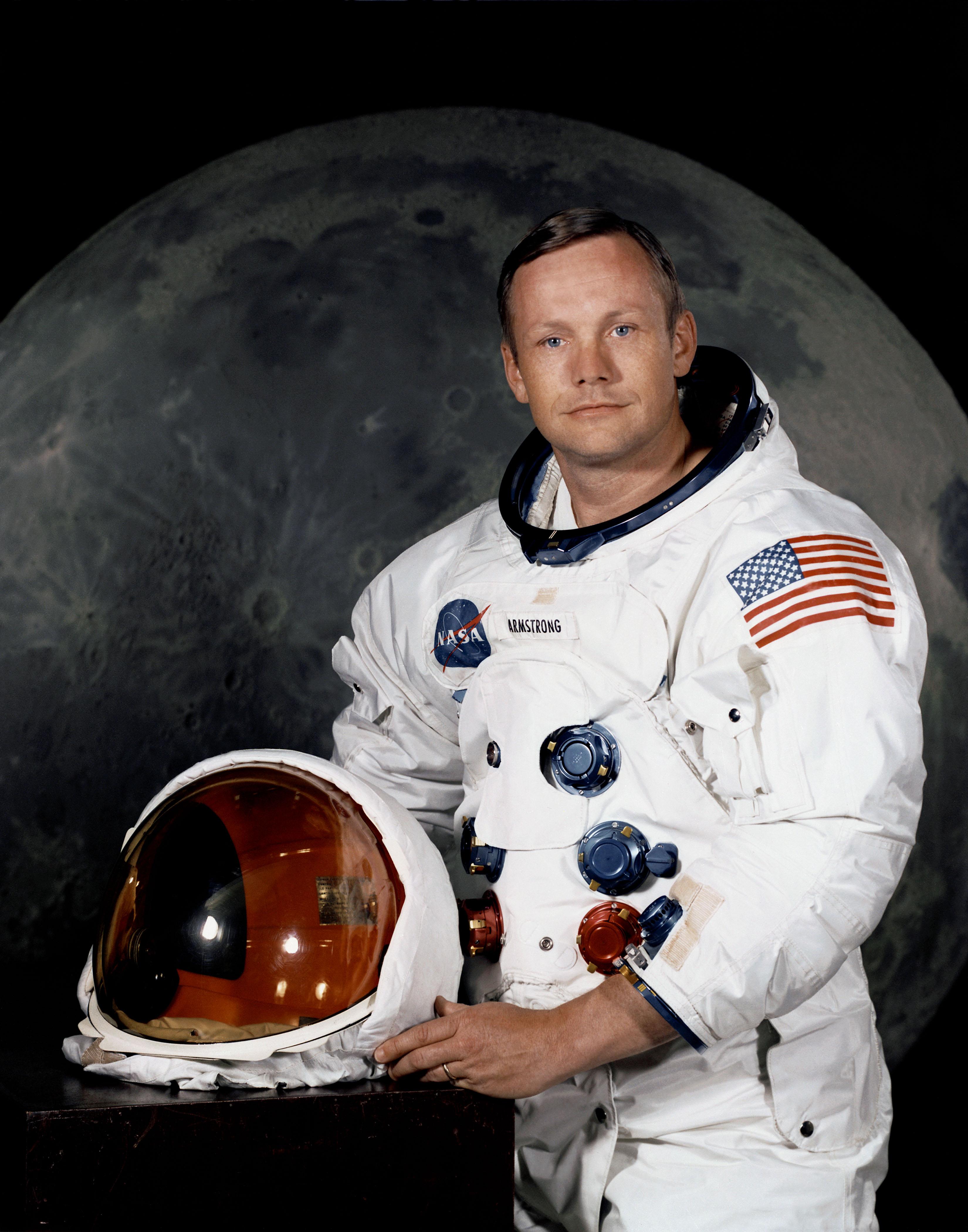 Gliders, sail planes, they're wonderful flying machines. It's the closest you can come to being a bird.

I am, and ever will be, a white socks, pocket protector, nerdy engineer.

I can honestly say - and it's a big surprise to me - that I have never had a dream about being on the moon.

That's one small step for man, one giant leap for mankind.

If that's there, I believe that technology will probably step up to their part of it.

We had hundreds of thousands of people all dedicated to doing the perfect job, and I think they did about as well as anyone could ever have expected.

All in all, for someone who was immersed in, fascinated by, and dedicated to flight, I was disappointed by the wrinkle in history that had brought me along one generation late. I had missed all the great times and adventures in flight.

I'm substantially concerned about the policy directions of the space agency. We have a situation in the U.S. where the White House and Congress are at odds over what the future direction should be. They're sort of playing a game and NASA is the shuttlecock that they're hitting back and forth.

NASA has been one of the most successful public investments in motivating students to do well and achieve all they can achieve. It's sad that we are turning the programme in a direction where it will reduce the amount of motivation and stimulation it provides to young people.

This is one small step for a man, one giant leap for mankind.

Mystery creates wonder and wonder is the basis of man's desire to understand.

I believe that every human has a finite number of heartbeats. I don't intend to waste any of mine running around doing exercises.

It suddenly struck me that that tiny pea, pretty and blue, was the Earth. I put up my thumb and shut one eye, and my thumb blotted out the planet Earth. I didn't feel like a giant. I felt very, very small.

I believe every human has a finite number of heartbeats. I don't intend to waste any of mine.

I think we're going to the moon because it's in the nature of the human being to face challenges. It's by the nature of his deep inner soul... we're required to do these things just as salmon swim upstream.

Science has not yet mastered prophecy. We predict too much for the next year and yet far too little for the next 10.

Houston, Tranquillity Base here. The Eagle has landed.

Pilots take no special joy in walking. Pilots like flying.

Here men from the planet Earth first set foot upon the Moon. July 1969 AD. We came in peace for all mankind.

In much of society, research means to investigate something you do not know or understand.

The important achievement of Apollo was demonstrating that humanity is not forever chained to this planet and our visions go rather further than that and our opportunities are unlimited.

I put up my thumb and it blotted out the planet Earth.

I guess we all like to be recognized not for one piece of fireworks, but for the ledger of our daily work.

As a boy, because I was born and raised in Ohio, about 60 miles north of Dayton, the legends of the Wrights have been in my memories as long as I can remember.

Much more quotes by Neil Armstrong below the page.

Geologists have a saying - rocks remember.

It's a brilliant surface in that sunlight. The horizon seems quite close to you because the curvature is so much more pronounced than here on earth. It's an interesting place to be. I recommend it.

I was elated, ecstatic and extremely surprised that we were successful.

I thought the attractions of being an astronaut were actually, not so much the Moon, but flying in a completely new medium.

The one thing I regret was that my work required an enormous amount of my time, and a lot of travel.

The Eagle has landed.

A big part of fixing AOL is getting AOL to believe in itself.

Anytime you make big plans, you have people questioning what you're doing.

I think if the average person that uses AOL can't physically see the changes in the company, we've failed.

I think international is a place that, actually, The Huffington Post and AOL have started to make moves in.

I'm a massive believer in brands. Silicon Valley has tried to reprogram everybody to think brands aren't valuable. Or theirs are, but yours aren't.

I'm used to being in creative environments where people throw out a lot of ideas.

The reality is, I've started multiple companies, so actually I'm probably more of a product/creative person than I am sales. Although I can do both.

What's happening internally is eventually what will take AOL back to being a growth company.

A picture of me as this super affable sales guy gets painted, but in actuality, I'm pretty driven by hard work and love working with teams. What people discount is, I grew up in a very small blue-collar town in Massachusetts and have basically scrapped my way career wise.

AOL, I think, represented an opportunity for a few things. One is I'm a big believer in the AOL brand, and I think AOL as a brand has touched hundreds of millions of people around the world. Reigniting that brand is a very exciting challenge and a big opportunity.

Bebo has an opportunity to prove its products and services. Bebo plays in a very competitive space; it has big market share in specific countries. An AIM profile vs. a Bebo profile are very different experiences.

I think, from a standpoint of editorial, you know, AOL historically has played in a very deep way across many different verticals in the content space. Huffington Post adds a very large new dimension to that.

I'm a person who likes to tackle challenges. Google was a challenge when I got there. I think AOL's a challenge. The way we run the company is a very team-focused environment.

One of AOL's biggest assets is its brand. For people over 30 and, due to AOL Instant Messenger, even a lot of people under 30, AOL was their first real interaction with technology in a positive way.

The No. 1 criticism most managers get is that they don't ever change or wait too long to make changes... It's very simple: Either things are performing or they're not. And if it's not performing, we have to make changes.

Think of any news site on the web that sells subscriptions; AOL has four times as many people as the largest subscription service. We have people who pay to use our products and services, and they are heavily engaged in our content.

Until the company believes in itself, AOL didn't have its own space and identity in the marketplace. The opportunity is to get out from under the negative history and figure out the value AOL offers for consumers and for publishers and advertisers.

We have people who pay to use our products and services, and they are heavily engaged in our content. If you erase the brand perceptions of AOL, and consider that people pay to use our properties, you would probably consider this one of the most valuable audiences on the Internet.

Rest, rest, shall I have not all eternity to rest.