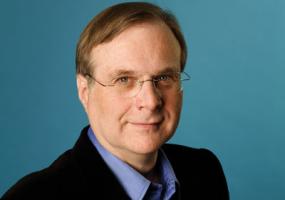 See the gallery for quotes by Paul Allen. You can to use those 8 images of quotes as a desktop wallpapers. 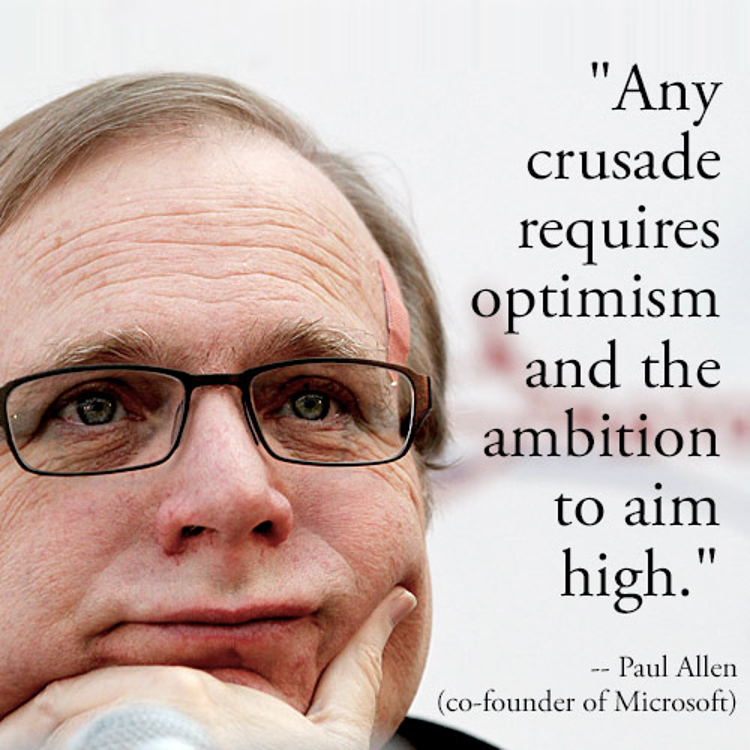 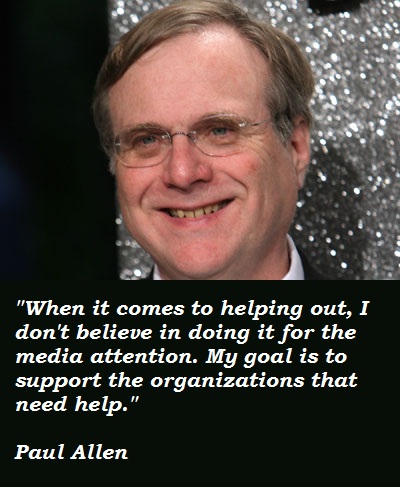 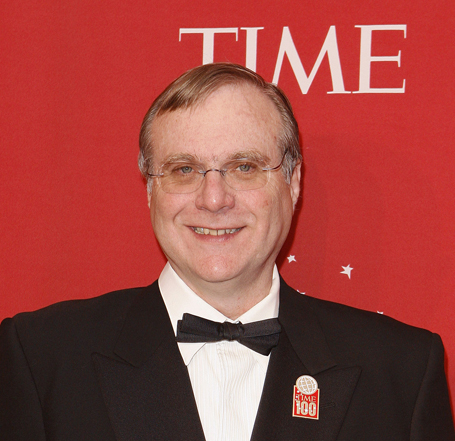 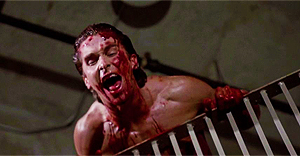 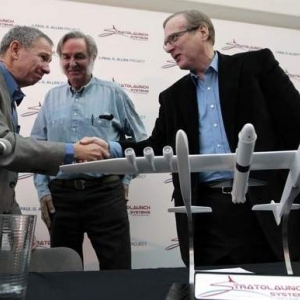 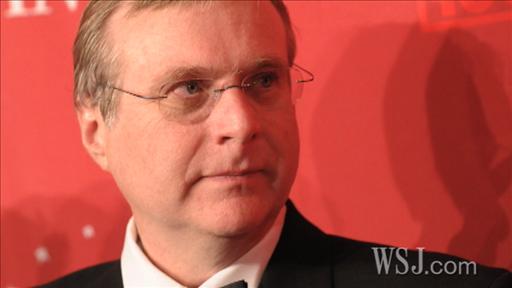 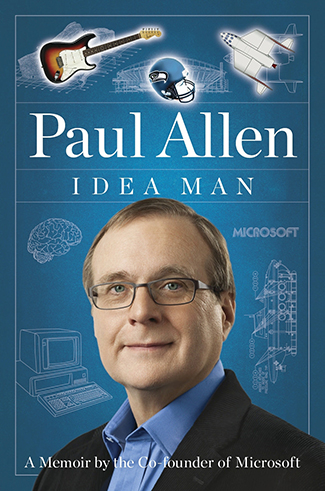 We've had some tough times, but we've hung in there.

As a species, we've always been discoverers and adventurers, and space and the deep ocean are some of the last frontiers.

I'm a very private person that prefers a low profile.

Technology is notorious for engrossing people so much that they don't always focus on balance and enjoy life at the same time.

The possible is constantly being redefined, and I care deeply about helping humanity move forward.

What should exist? To me, that's the most exciting question imaginable. What do we need that we don't have? How can we realize our potential?

When it comes to helping out, I don't believe in doing it for the media attention. My goal is to support the organizations that need help.

You look at things you enjoy in your life, but much more important is what you can do to make the world a better place.

I am very excited to be supporting one of the world's most visionary efforts to seek basic answers to some of the fundamental question about our universe and what other civilisations may exist elsewhere.

I grew up around books. When I first held the book and it was a substantive, tangible thing, and I thought of all the work that went into it, not just my work but everybody else's and the research and so forth, there's a sense of really have done something worthwhile.

If you think about making a difference in the community, my family has always had a strong interest in the arts. I'm always interested in finding ways to innovate... It's a blend; it's not a point focus.

In global warming, I think everyone is scratching their heads - are there technological things that can be brought to bear that can make a difference?

In my own work, I've tried to anticipate what's coming over the horizon, to hasten its arrival, and to apply it to people's lives in a meaningful way.

In the computer industry, you've got an interdisciplinary team of people who can come together, attack the problem, and work in a collaborative style. You knock down one problem after another, cobble things together, and then hopefully turn the crank at some point.

Tags: After, Together, Work

In the first eight or so years at Microsoft, we were always chained to our terminals, and after I got sick the first time, I decided that I was going to be more adventurous and explore more of the world.

Once you become an owner of a team, you get so much more into the sport and you can't help it. So I really love NFL football now to the degree of following it much more than I did previously.

That would be such a life-changing thing, for us all to know that there are other beings out there who we could potentially communicate with, or maybe we are listening to a signal that they transmitted hundreds of millennia ago.

The best museums and museum exhibits about science or technology give you the feeling that, hey, this is interesting, but maybe I could do something here, too.

Traditionally, Seattle has been a great sports town and great football town. What the Huskies have achieved over the years has been pretty amazing. That's how I got my first taste of football - when I went with my father to Husky Stadium.

While I sign off on trades or free agents, I've rarely overruled my basketball people's decisions. But I'm not shy about steering the discussion or pushing deeper if something doesn't make sense to me.

With documentary-film projects, you hope you highlight an area of concern people haven't thought about before. A lot of times, I'm asking myself - 'This seems to be a significant problem. What can be done that hasn't been done?'

You've got to enjoy time with your family and friends, and if you're involved in sports franchises, those peak moments in playoff games. You have to enjoy life.

Even more than this, however, the sick - like lepers - were often reviled because people believed that they had brought their torments upon themselves.

Medical research in the twentieth century mostly takes place in the lab; in the Renaissance, though, researchers went first and foremost to the library to see what the ancients had said.

Much more quotes by Paul Allen below the page.

Perhaps more than any other disease before or since, syphilis in early modern Europe provoked the kind of widespread moral panic that AIDS revived when it struck America in the 1980s.

The idea of infection began to be taken far more seriously than it ever had before. Hospitals transformed themselves in response to the new plague - sometimes for the better, but often for the worse, as when, in fear, they cast their ulcerated patients out into the streets.

Was this an old disease, and, if so, which one? If it was new, what did that say about the state of medical knowledge? And in any case, how could physicians make sense of it?

At that time, the academic orientation was rather technical contrary to that of the university, where art theory is very important. The teachers were renowned artists and among the best of that time.

I paint according to the moment and the theme. I don't have any prejudice. Life concerns me.

People are predominant in my paintings. Although they are not obvious, you can feel their presence.

The magic of creation has always fascinated me.

I worked three and then six hours a day in my studio with strict discipline and emotion. I obtained awards usually granted to other foreigners during the end-of-year admission tests.

My first concern was to take care of my drawing. I did not have any knowledge in arts, especially Haitian arts, apart from the paintings I saw in my father's office.

Without a good cultural policy, without adequate help, we will always have individualists, shooting stars who are rapidly forgotten or who stop painting for a more profitable occupation.

'Favoritism' is always a factor, and pressure always build for the appointment of friends of influential supporters of the President, or for the nominees of powerful Member of Congress from the incoming President's party.

A skilled Transition Team leader will set the general goals for a Transition, and then confer on the other team leaders working with him the power to implement those goals.

In general, any incoming administration must carefully examine ('vet') its nominees for high public office.

A Bush Administration will, I believe, enjoy a better relationship with the new Congress, although President-elect Bush will be faced with real challenges in getting along with the Congress.

At the same time, the Reagan Administration assured that the main elements of policymaking were in the hands of competent loyalists, thus assuring a successful launch and a highly successful first year.

Certainly, the Bush Administration will rely in the first instance on its friends, since it would be both illogical and counterproductive to reward its adversaries.

Tags: Both, Friends, Since

I would argue that the next President, either Bush or Gore, should strike a 'national' posture, exhibiting generosity toward the defeated opponent, but proceeding with determination to implement an agenda.

Tags: Either, Next, President

If it is widely assumed that the new President cannot move forward simply because of a narrow victory, there can easily develop a sense of unease and uncertainty, adversely affecting every sector of American society, our economy and the perception of other nations.

In this context, I believe it is an imperative for the new President to select and install his team as quickly as possible, and this does not imply that he must or should appoint members of the 'other' party to his Cabinet, which could contribute to inaction and inefficiency.

Jimmy Carter began his planning in the early summer of 1976, Ronald Reagan a year prior. The Clinton Administration, elected in 1992, lingered in naming its team, and as a result, took almost a year to staff its ranks.

Our system provides for a winner to take office on January 20th, and he is expected to take command of the ship of state. Failure to do so, characterized by hesitation and indecision, will harm the national interest.

Temporary teams of trusted people are generally sent to all Departments and to major agencies of government to assist in planning and to acquaint the incoming administration with the civil servants and bureaucracy that will remain in place in the new Administration.

The 'transition' involves the transfer of power from one president to another. In recent times, the incoming President has designated a Director of the Transition, a team leader, to oversee and administer the orderly transfer of power.

The choice of personnel, perhaps the most important choice (because 'people are policy'), never proceeds according to plan, but there have been some successful transitions that upheld high standards.

The Leader will be a person with the management skills to coordinate the activities of the Team, and to assure that the Team remains faithful to the objectives of the incoming President.

The Reagan Administration, generally regarded as having conducted the most successful Transition of modern times, had managed during the election campaign to build bridges to the Democrats in some areas, notably foreign and national security policy.

The single most important aspect of the Transition involves the selection of personnel to manage the transfer of responsibility. The law provides roughly ten weeks to accomplish this process.

This land, which we have watered with our tears and our blood, is now our mother country, and we are well satisfied to stay where wisdom abounds and gospel is free.

Unlike the Reagan and Bush Administrations, with but one exception, the Clinton administration failed to reach out to Republicans in creating a new team, and eventually paid a political price.

Usually, those persons closest to the incoming President will be the main leaders of the Transition effort. They are most familiar with his policies and practices, and are able to interpret his wishes regarding the structure and staffing of the new Administration.

We who have been born and nurtured on this soil, we, whose habits, manners, and customs are the same in common with other Americans, can never consent to - be the bearers of the redress offered by that Society to that much afflicted.