See the gallery for quotes by Richard Russo. You can to use those 8 images of quotes as a desktop wallpapers. 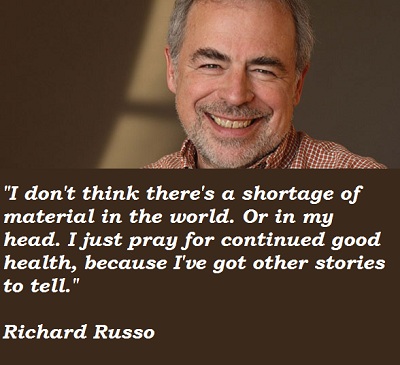 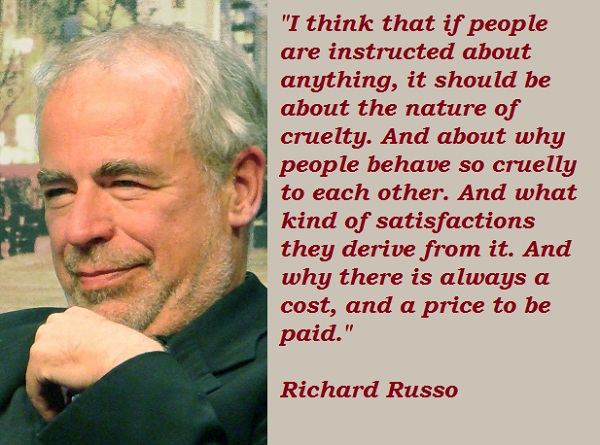 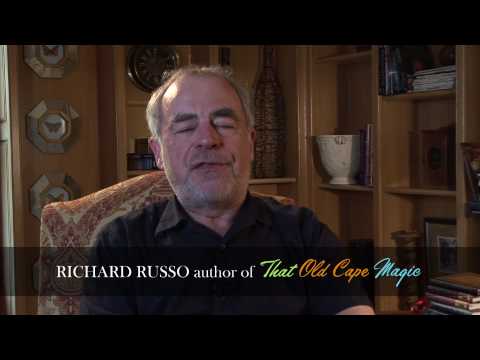 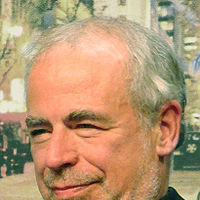 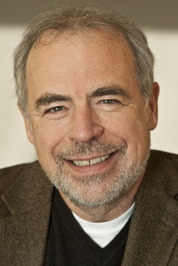 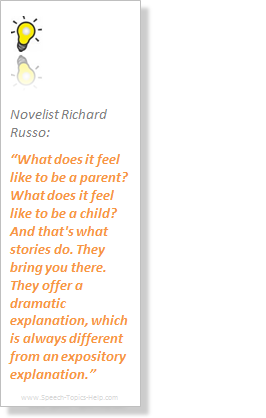 People in small towns, much more than in cities, share a destiny.

Structure is one of the things that I always hope will reveal itself to me.

The deepest failures any fiction writer is likely to have are failures of not quite comprehending the truth of the story that he or she is telling.

Ultimately, your theme will find you. You don't have to go looking for it.

Usually by the time I finish a book tour I've just about had it with the book.

Writers are people who put pen to paper every day.

You use simple brushstrokes in a screenplay for things over which you would take much greater pains in a novel.

A couple years ago, the novelist Russell Banks told me he was reading the ancient Greek historian Herodotus. I asked why. He said, 'Because I've always wanted to and am tired of having my reading assigned.' I thought it was a marvelous declaration of independence.

A lot of my characters in all of my books have a self-destructive urge. They'll do precisely the thing that they know is wrong, take a perverse delight in doing the wrong thing.

About 15 years ago I went though a period of a year or so when I just couldn't find anything good. My wife noticed I was having trouble reading menus. I bought some cheap reading glasses in a drug store. I got home and suddenly all these books that weren't good were good.

By ignoring a lot of American culture you can write more interesting stories. Unfortunately, if you were writing about America as it is, you'd be writing about a lot of people sitting in front of television sets.

I looked back at some of my earlier published stories with genuine horror and remorse. I got thinking, How many extant copies might there be, who owns them, and do they keep their doors locked?

I never worry about people not taking my work seriously as a result of the humor. In the end, the comic's best trick is the illusion that comedy is effortless. That people imagine what he's doing is easy is an occupational hazard.

I was pretty dead set against ever writing an academic novel. It's always been my view that there are already more than enough academic novels and that most of them aren't any good. Most of them are self-conscious and bitter, the work of people who want to settle grudges.

If my career continues along its current arc, people will probably look at me and see a writer who is obsessed with the relationship between rich and poor and with how the rich somehow or other always manage to betray the poor, even when they don't mean to.

My books are elegiac in the sense that they're odes to a nation that even I sometimes think may not exist anymore except in my memory and my imagination.

My dad had this rock hard body and would work 12- to 13-hour days. The guys he worked with were scrap-iron guys. Nobody on that road crew had read a book in 10 years, but there was something about the way they lived I really admired.

Some authors have a very hard time understanding that in order to be faithful to the spirit of the book, it's almost always impossible to remain faithful to the text. You have to make changes.

Truth be told, I'm not an easy man. I can be an entertaining one, though it's been my experience that most people don't want to be entertained. They want to be comforted.

What comes easiest for me is dialogue. Sometimes when my characters are speaking to me, I have to slow them down so that I'm not simply taking dictation.

When authors who write literary fiction begin to write screenplays, everybody assumes that's the end. Here's another who's never going to write well again.

When I look back over my novels what I find is that when I think I'm finished with a theme, I'm generally not. And usually themes will recur from novel to novel in odd, new guises.

When I start getting close to the end of a novel, something registers in the back of my mind for the next novel, so that I usually don't write, or take notes. And I certainly don't begin. I just allow things to percolate for a while.

You can be interested in a Jane Smiley novel whether or not anyone says a word. She enters into her characters' thoughts with great understanding and depth.

Much more quotes by Richard Russo below the page.

You just kind of have faith. If that sounds kind of mystical, it's because I really don't know how it works, but I trust that it does. I try to write the way I read, in order to find out what happens next.

I think that if people are instructed about anything, it should be about the nature of cruelty. And about why people behave so cruelly to each other. And what kind of satisfactions they derive from it. And why there is always a cost, and a price to be paid.

I think a lot of what is going on with kids who get pushed too far and attempt either murder or suicide is that they are trying to deal with their own non-existence for the people who are supposed to care most for them.

Cary Grant never won an Oscar, primarily, I suspect, because he made everything look so effortless. Why reward someone for having fun, for being charming?

Tags: Fun, Someone, Why

I don't think there's a shortage of material in the world. Or in my head. I just pray for continued good health, because I've got other stories to tell.

At the risk of appearing disingenuous, I don't really think of myself as 'writing humor.' I'm simply reporting on the world I observe, which is frequently hilarious.

I have to have a character worth caring about. I tend not to start writing books about people I don't have a lot of sympathy for because I'm just going to be with them too long.

A short story is something that I think can be intuited and envisioned and held in your mind almost at once.

America has always been a nation of small places, and as we lose them, we're losing part of ourselves.

Even at its most perceptive, sociology deals in abstractions.

HBO is really famous for hiring good people and staying out of their way until they ask for help, or need it. And that reputation is earned.

I can be glib and truthful all at once.

I get and read an enormous number of first novels.

I read pretty voraciously. If it's good, I don't care what it is.

I suppose all writers worry about the well running dry.

I think it would be harder for me not to write comedy because the comic view of things is the one that comes most naturally to me.

I think the darker aspect of my fiction-or anybody's fiction-is by its very nature somehow easier to talk about.

I'm delighted by how Nobody's Fool turned out. It was a rare movie.

I've never written nearly as much about place as people seem to think I do. I just write about class.

If there's an enduring theme in my work, it's probably the effects of class on American life.

If you work at comedy too laboriously, you can kill what's funny in the joke.

It's no secret that in my books I'm trying to make the comic and the serious rub up against each other just as closely and uncomfortably as I can.

Movies have to handle time very efficiently. They're about stringing scenes together in the present. Novels aren't necessarily about that.

Not everyone writes well from a child's point of view.

After that I couldn't show my face outside. I lost my identity and balance. I was still living with my parents, and they were my only friends. For so many people, this thing with the nurse was confirmation that I must be mad or mentally ill.

I don't have my pilot's licence anymore, but I'm still very political.

I ended up injuring her with a knife I had on me. I can't really remember what happened.

I got my private pilot's license in autumn 1986.

I had thought about landing in the Kremlin, but there wasn't enough space.

I moved away for three years and went to Trinidad where I met my wife, Athena.

I now work for a finance company in Luxembourg with projects in South America and the Caribbean.

I regret what happened. I saw no other possibility to achieve my goal. It was not hooliganism.

I wanted to choose somewhere public, because I was scared of the KGB.

Imprisonment hit me so hard - much harder than I had thought.

My plan was to land in Red Square, but there were too many people and I thought I'd cause casualties.

The defence and air defence ministers were both replaced and more than 2,000 officers lost their jobs.

I approached Red Square three times, trying to find somewhere to land, before discovering a wide bridge nearby. I landed there and taxied into Red Square.

I didn't tell anybody about my plan because I was convinced my family or friends would stop me. I didn't think much about what would happen afterwards.

I had one companion. He was a teacher from the Ukraine who spoke English so we could communicate a bit. I learnt a few Russian words, but it was hard to concentrate.

My parents were angry, but they were relieved that I was in good condition. They had been afraid the Russians would torture me. They told me not to do it again!

Once this key conflict is eased, it will have a huge impact on the world. It will take time to find a solution. It's similar to the situation between East and the West at the time of my flight.

Tags: Between, Once, Time

You have to be young to be able to do things like that. Now I'm more cautious. I'm proud that I was able to do what I did - psychologically it was a great wall to climb - but sometimes I regret it.