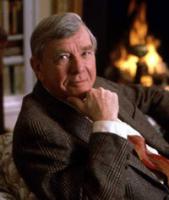 See the gallery for quotes by Russell Baker. You can to use those 7 images of quotes as a desktop wallpapers. 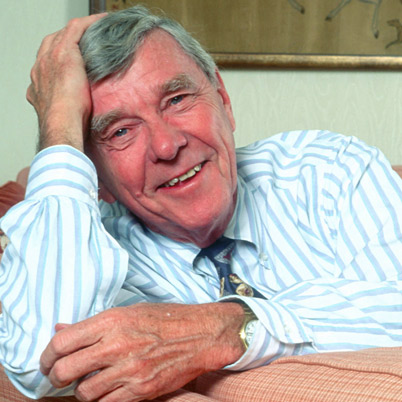 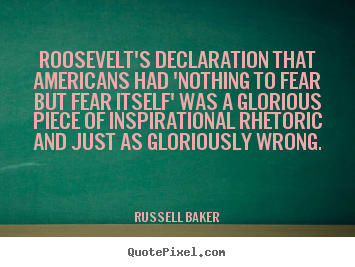 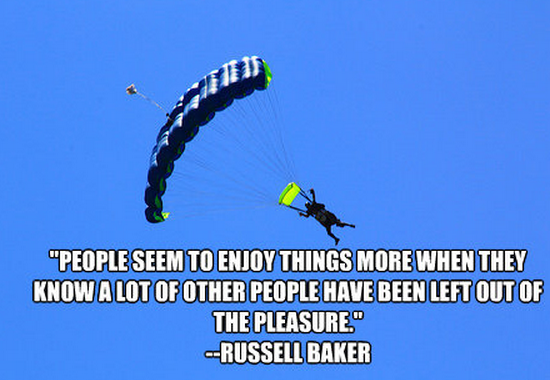 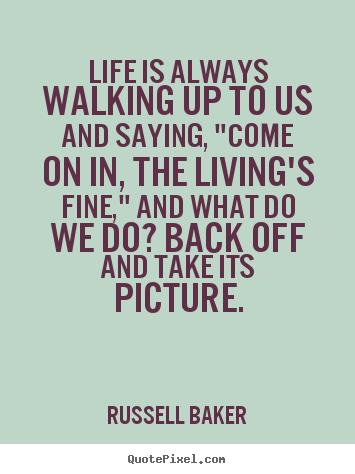 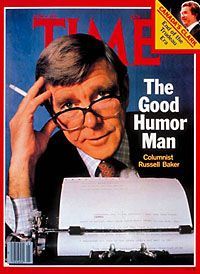 A skillful playwright might have a good time with the story of the assassination of President William McKinley, and especially with the three most flamboyant political figures involved: Mark Hanna, Theodore Roosevelt, and Emma Goldman.

Much more quotes by Russell Baker below the page.

It is fitting that yesteryear's swashbuckling newspaper reporter has turned into today's solemn young sobersides nursing a glass of watered white wine after a day of toiling over computer databases in a smoke-free, noise-free newsroom.

It's good for the soul to hear yourself as others hear you, and next time maybe, just maybe, you will not talk so much, so loudly, so brilliantly, so charmingly, so utterly shamelessly foolishly.

Like all young reporters - brilliant or hopelessly incompetent - I dreamed of the glamorous life of the foreign correspondent: prowling Vienna in a Burberry trench coat, speaking a dozen languages to dangerous women, narrowly escaping Sardinian bandits - the usual stuff that newspaper dreams are made of.

My natural instinct after doing something shameful is not to rush into the street boasting about it but to put on dark glasses and head for the next county, hoping nobody notices I've been in the neighborhood.

Strategic thinkers were naturally rattled to find this outsider fooling around with their work. They had been thinking strategically when Reagan was just another movie actor playing opposite a chimpanzee, for heaven's sake. They think Reagan is too naive, too innocent, to grasp the intellectual complexities of cold war strategy.

The best discussion of trouble in boardroom and business office is found in newspapers' own financial pages and speeches by journalists in management jobs.

The only thing I was fit for was to be a writer, and this notion rested solely on my suspicion that I would never be fit for real work, and that writing didn't require any.

There is a growing literature about the multitude of journalism's problems, but most of it is concerned with the editorial side of the business, possibly because most people competent to write about journalism are not comfortable writing about finance.

What the New Yorker calls home would seem like a couple of closets to most Americans, yet he manages not only to live there but also to grow trees and cockroaches right on the premises.

You can always tell folks from nonfolks. Folks like to feel good, like to smile for the camera when there's a big photo opportunity for a really good cause.

An educated person is one who has learned that information almost always turns out to be at best incomplete and very often false, misleading, fictitious, mendacious - just dead wrong.

Ah, summer, what power you have to make us suffer and like it.

Don't try to make children grow up to be like you, or they may do it.

A group of politicians deciding to dump a President because his morals are bad is like the Mafia getting together to bump off the Godfather for not going to church on Sunday.

Children rarely want to know who their parents were before they were parents, and when age finally stirs their curiosity, there is no parent left to tell them.

Inanimate objects can be classified scientifically into three major categories; those that don't work, those that break down and those that get lost.

Reporters thrive on the world's misfortune. For this reason they often take an indecent pleasure in events that dismay the rest of humanity.

In America, it is sport that is the opiate of the masses.

People seem to enjoy things more when they know a lot of other people have been left out of the pleasure.

I gave up on new poetry myself 30 years ago when most of it began to read like coded messages passing between lonely aliens in a hostile world.

It was clear soon after his election that Obama, like FDR, wanted to start dealing with the economic crisis immediately after his inauguration.

Listen once in a while. It's amazing what you can hear.

Tags: Amazing, Once, While

When it comes to cars, only two varieties of people are possible - cowards and fools.

A day spent praising the earth and lamenting man's pollutionist history makes you feel like a superior, sensitive soul.

Anticipating that most poetry will be worse than carrying heavy luggage through O'Hare Airport, the public, to its loss, reads very little of it.

Anything that isn't opposed by about 40 percent of humanity is either an evil business or so unimportant that it simply doesn't matter.

Caution: These verses may be hazardous to your solemnity.

In America nothing dies easier than tradition.