See the gallery for quotes by Salman Rushdie. You can to use those 8 images of quotes as a desktop wallpapers. 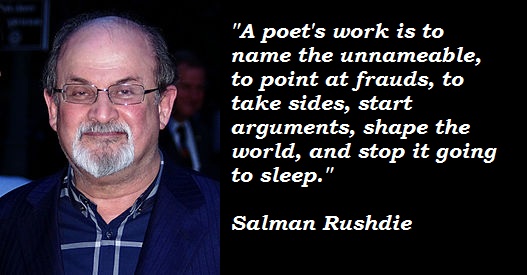 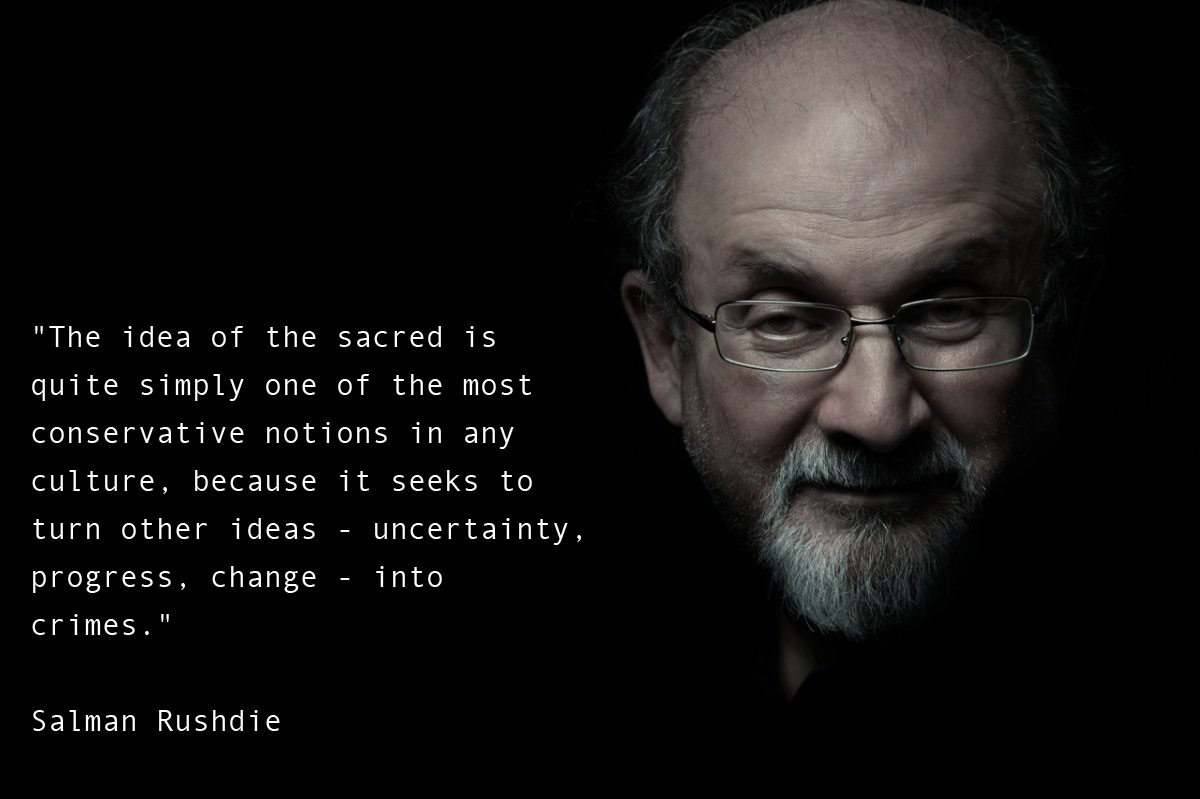 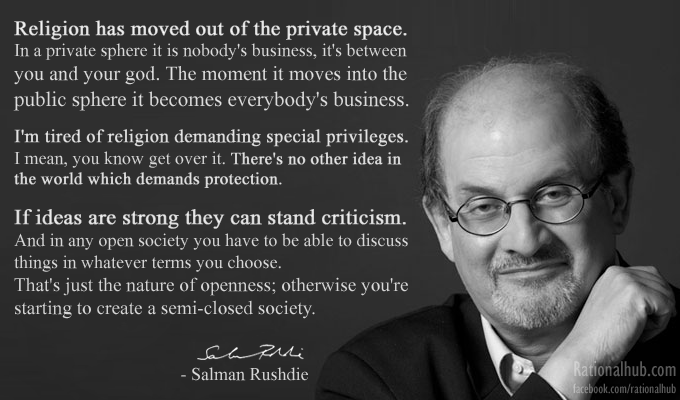 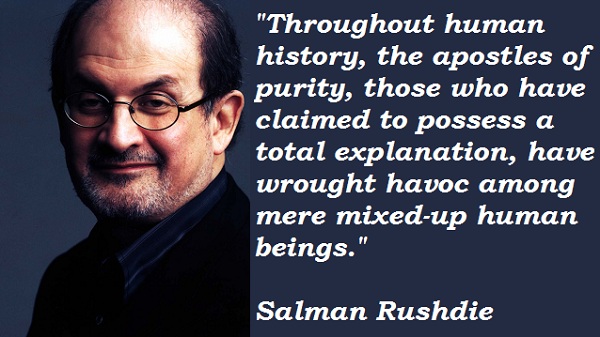 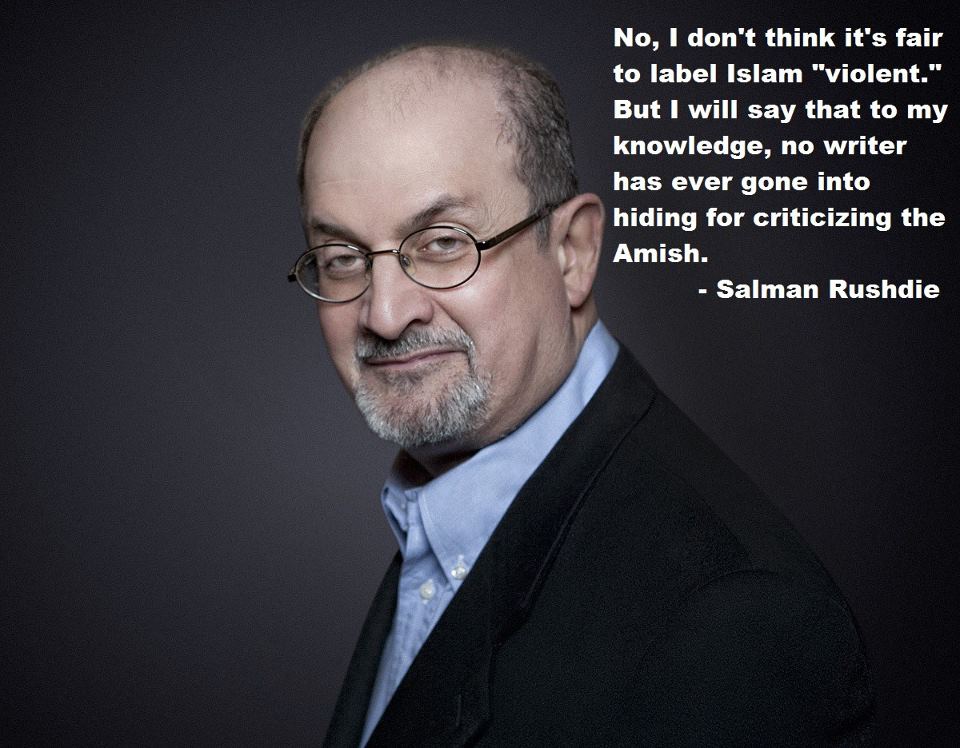 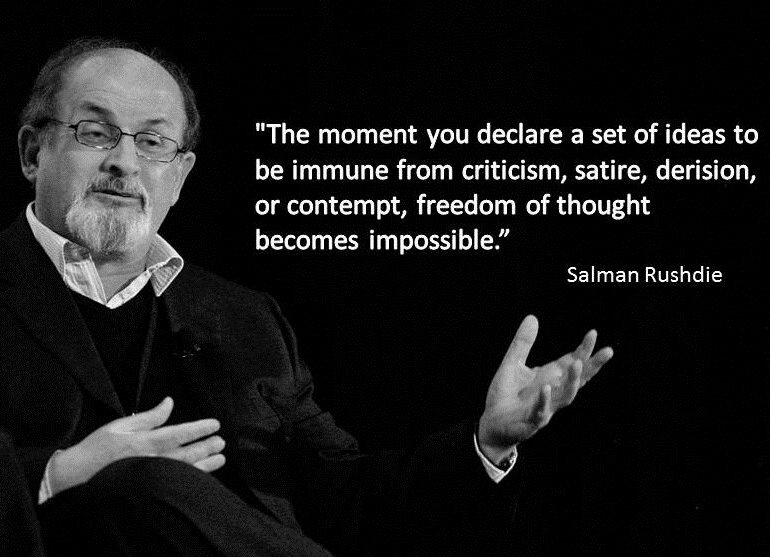 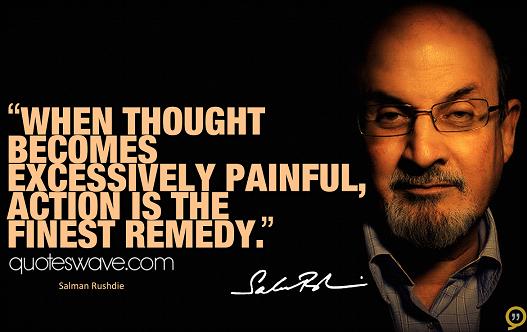 The accidents of my life have given me the ability to make stories in which different parts of the world are brought together, sometimes harmoniously, sometimes in conflict, and sometimes both - usually both. The difficulty in these stories is that if you write about everywhere you can end up writing about nowhere.

Be sure that you go to the author to get at his meaning, not to find yours.

Tags: Meaning, Sure, Yours

I don't like books that play to the gallery, but I've become more concerned with telling a story as clearly and engagingly as I can.

I'm no friend of Tony Blair's and I consider the Middle East policies of the United States and the UK fatal.

If I were asked for a one-sentence sound bite on religion, I would say I was against it.

If you actually want to change your world, there is a better way of doing it than blowing yourself up.

In this world without quiet corners, there can be no easy escapes from history, from hullabaloo, from terrible, unquiet fuss.

It is very, very easy not to be offended by a book. You just have to shut it.

Our lives are not what we deserve; they are, let us agree, in many ways deficient.

Such is the miraculous nature of the future of exiles: what is first uttered in the impotence of an overheated apartment becomes the fate of nations.

The only way of living in a free society is to feel that you have the right to say and do stuff.

The only way to find out why someone decides to engage in armed combat is to look at their individual personality.

Tags: Individual, Someone, Why

Writers have been in terrible situations and have yet managed to produce extraordinary work.

It's so disappointing, to put it mildly, that people know so much about my life. Because it means that they're always trying to look at my books in terms of my life.

But there's one thing we must all be clear about: terrorism is not the pursuit of legitimate goals by some sort of illegitimate means. Whatever the murderers may be trying to achieve, creating a better world certainly isn't one of their goals. Instead they are out to murder innocent people.

Tags: May, Trying, Whatever

If you take a look at history, you will find that the understanding of what is good and evil has always existed before the individual religions. The religions were only invented by people afterwards, in order to express this idea.

At the height of the British Empire very few English novels were written that dealt with British power. It's extraordinary that at the moment in which England was the global superpower the subject of British power appeared not to interest most writers.

I used to say, 'There is a God-shaped hole in me.' For a long time I stressed the absence, the hole. Now I find it is the shape which has become more important.

I was 21 in 1968, so I'm as much a child of the '60s as is possible to be. In those years the subject of religion had really almost disappeared; the idea that religion was going to be a major force in the life of our societies, in the West anyway, would have seemed absurd in 1968.

I've never seen anywhere in the world as beautiful as Kashmir. It has something to do with the fact that the valley is very small and the mountains are very big, so you have this miniature countryside surrounded by the Himalayas, and it's just spectacular. And it's true, the people are very beautiful too.

Names, once they are in common use, quickly become mere sounds, their etymology being buried, like so many of the earth's marvels, beneath the dust of habit.

The acceptance that all that is solid has melted into the air, that reality and morality are not givens but imperfect human constructs, is the point from which fiction begins.

The response of anybody interested in liberty is that we all have a say and the ability to have an argument is exactly what liberty is, even though it may never be resolved. In any authoritarian society the possessor of power dictates, and if you try and step outside he will come after you.

There is a widespread difficulty in the Muslim world, which has to do with how the people are taught about examining their own history. A whole range of stuff has been placed off limits.

What is freedom of expression? Without the freedom to offend, it ceases to exist.

Much more quotes by Salman Rushdie below the page.

A poet's work is to name the unnameable, to point at frauds, to take sides, start arguments, shape the world, and stop it going to sleep.

A book is a version of the world. If you do not like it, ignore it; or offer your own version in return.

I've never had very high regard for therapists. I owe my health, my mental survival, to my friends and loved ones.

What distinguishes a great artist from a weak one is first their sensibility and tenderness; second, their imagination, and third, their industry.

When thought becomes excessively painful, action is the finest remedy.

I do not need the idea of God to explain the world I live in.

Throughout human history, the apostles of purity, those who have claimed to possess a total explanation, have wrought havoc among mere mixed-up human beings.

Books choose their authors; the act of creation is not entirely a rational and conscious one.

Vertigo is the conflict between the fear of falling and the desire to fall.

One of the extraordinary things about human events is that the unthinkable becomes thinkable.

I'm not a prophet, but I always thought it was natural for dictatorships to fall. I remember in 1989, two months before the fall of the Berlin Wall, had you said it was going to happen no one would have believed you. The system seemed powerful and unbreakable. Suddenly overnight it blew away like dust.

The idea of the sacred is quite simply one of the most conservative notions in any culture, because it seeks to turn other ideas - uncertainty, progress, change - into crimes.

Most of what matters in your life takes place in your absence.

When you write, you write out of your best self. Everything else drops away.

Tags: Away, Best, Self

Our lives teach us who we are.

Rock and roll music - the music of freedom frightens people and unleashes all manner of conservative defense mechanisms.

Writers and politicians are natural rivals. Both groups try to make the world in their own images; they fight for the same territory.

Doubt, it seems to me, is the central condition of a human being in the twentieth century.

I hate admitting that my enemies have a point.

What one writer can make in the solitude of one room is something no power can easily destroy.