See the gallery for quotes by Steve Earle. You can to use those 7 images of quotes as a desktop wallpapers. 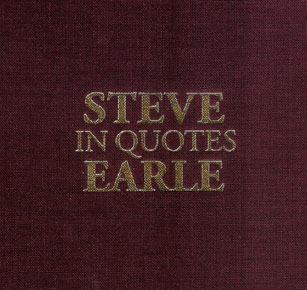 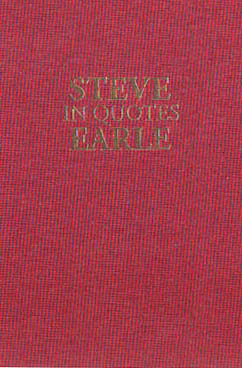 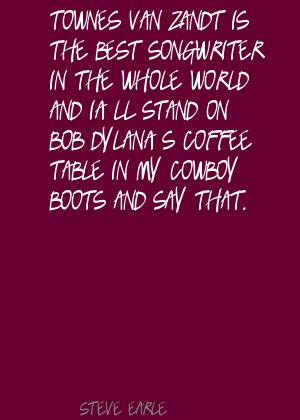 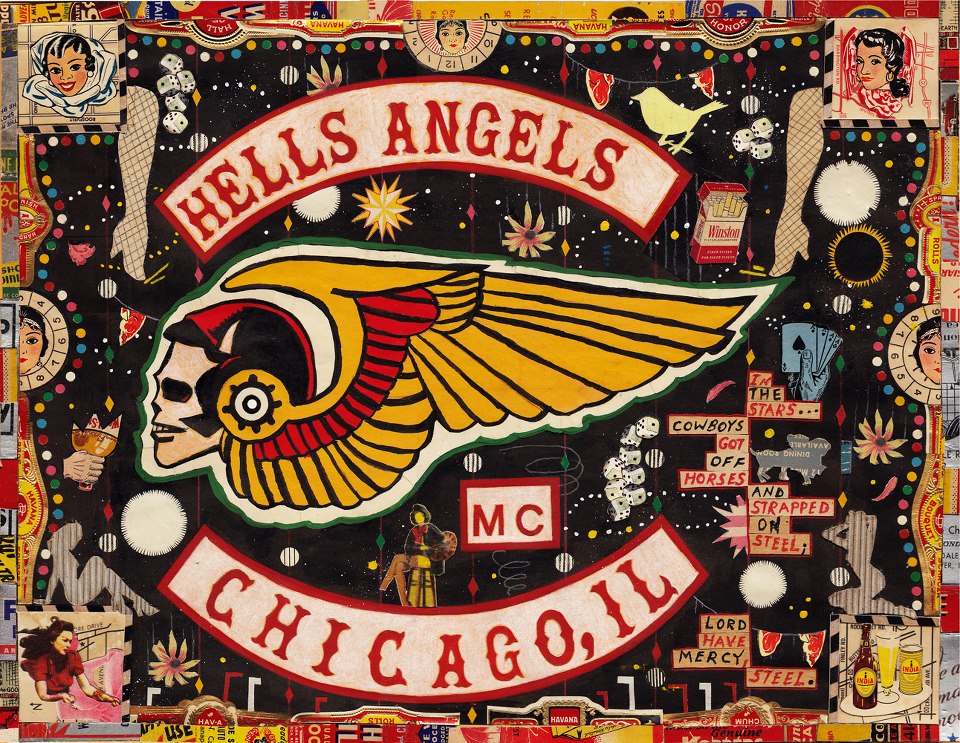 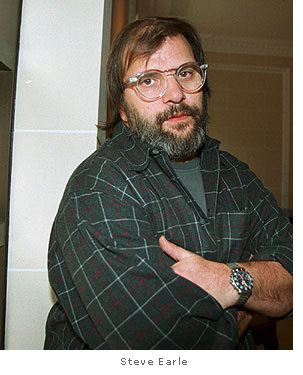 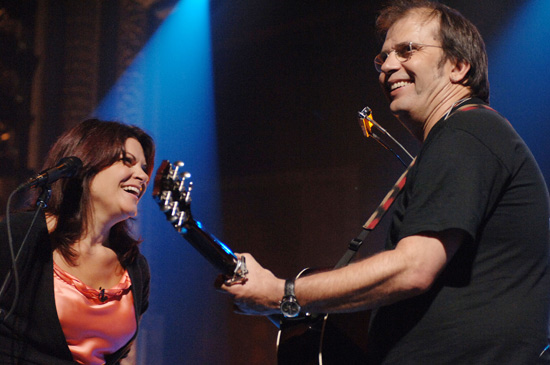 You can't write if you don't read.

You see things differently at 40 than you do at 31. Especially if you got to 40 the way I did.

Much more quotes by Steve Earle below the page.

Becoming interested in poetics got me interested in theater. Theater is supposed to be poetry, you know, before it's anything else. It just doesn't fly if it isn't musical.

I am connected to the past in a way that keeps me going forward. Every leap forward that I make is by reaching back and firmly getting a footing in the past, and pushing forward as hard as I can.

I love e-books. I can carry the complete works of William Shakespeare around with me all the time. Just think about that. Whether I'm on an airplane or wherever. Being able to have a library in your back pocket basically is something I support.

I think the singer/songwriter genre is going to be like bluegrass and jazz. You can make a living at it, but it's not part of the musical mainstream anymore.

I'm a country singer, and I'm comfortable with that. But why does a country singer have to play only on country radio or a rock singer only on a rock station? I still don't understand why it's that big a deal.

I'm constantly warning people that are involved in my life that I can go busk and make a living. I can make my rent in New York City in the subway, I promise, if I'm forced to.

In New York, I'm around a lot of the reasons I started playing music in the first place. I live right behind Matt Umanov Guitars. I live on the street that Suze Rotolo and Bob Dylan were walking down on the album cover. I recognize the history.

Like most kids, I grew up singing 'This Land Is Your Land' in grammar school, but with the most radical verses neatly removed. This was before I knew it was a Woody Guthrie song.

My son was diagnosed with autism. He's OK, he makes eye contact, but he doesn't talk. He needs eight hours a day of very intensive school, and you wouldn't even believe me if I told you how much it costs.

San Antonio is like a military town. It's like literally - when I was growing up there, there were five Air Force bases, plus Fort Sam Houston. I was always sort of near the military.

The drama teacher that I had in high school, back in Texas, was the only teacher who didn't kick me out of his class. He turned me on to 'The Freewheelin' Bob Dylan.' I had picked up Dylan with 'Bringing It All Back Home,' and he turned me on to the first couple of albums, which I hadn't heard.

The idea that murder victims' families are best served by continuing the cycle of violence is something that I consider to be not only a lie, but criminally negligent. You lie to victims' families when you tell them they're going to receive closure if they participate in the process and witness the execution of a human being.

The singer-songwriter has always played music that was stylistically rooted in the '30s and the Great Depression and the Dust Bowl. But the fact of the matter is that none of us remember the Depression firsthand.

They say death and taxes are the only things that are inevitable. The truth is, you can not pay your taxes. I've done it, and there's consequences, but it can be done. Death you're not going to get out of, and you kind of got to deal with it.

We're so terrified of death in Western culture that we have to make up a myth of an afterlife. I think there's something to be said for living your life very mindful of the fact that you're going to die because I think you carry yourself differently. It doesn't have to be this big, negative bummer.

You can go out and find ways to make your own record and get it out there now. If you really want to, you can be heard. Keep things simple. Learn to go out and play solo. That's a really really good thing to learn, if you're a singer-songwriter. Don't be dependent on a band because you may not always be able to afford one.

You can listen to carpenters talk for hours in Ireland. The people have a relationship to words that I don't think you will run into anyplace in the world.

Actually, in its purest form, Islam is incredibly tolerant. That makes what's going on in the world really bizarre.

I don't really think in terms of obstacles. My biggest obstacle is always myself.

If I can get Me out of the way, I can do anything.

America's criminal justice system isn't known for rehabilitation. I'm not sure that, as a society, we are even interested in that concept anymore.

At home, I'm lucky if I can write three or four hours before the phone starts ringing and the kids want to go to soccer.

Fundamentalism, as practiced by the Taliban, is the enemy of real thought, and religion too.

Funerals are a pagan rite. There's not any doubt about it.

Gregory Corso used to get really pissed when people called Bob Dylan a 'poet.' After writing poetry for a few years, I can understand that.

I don't believe that songwriting has to be profound, but I truly believe that it's a crime for you to go outta your way for it not to be.

I don't care what's happening in the mainstream of country music. I haven't in a long time.

I don't think I'm a political songwriter as much as I am just a political person. I think it's in my fabric.

I love baseball. I'll probably end up one of those old farts who go to spring training in Florida every year and drive from game to game all day.

I mainly read non-fiction, and that's probably because I have a huge amount of insecurity about my lack of education and the things I don't know.

I still write more songs about girls than anything else.

I think it's obvious that democracy is something that is contagious, and it always has been.

I'm from Texas. I hitchhiked to Tennessee when I was 19 years old, and it is really beautiful in Tennessee.

I'm used to writing stories with a beginning a middle and an end in four minutes.

I've been a serial husband, and I've done it badly every time.

I've been on every interstate highway in the lower forty-eight states by now, and I never get tired of the view.