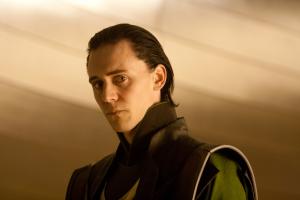 See the gallery for quotes by Tom Hiddleston. You can to use those 7 images of quotes as a desktop wallpapers. 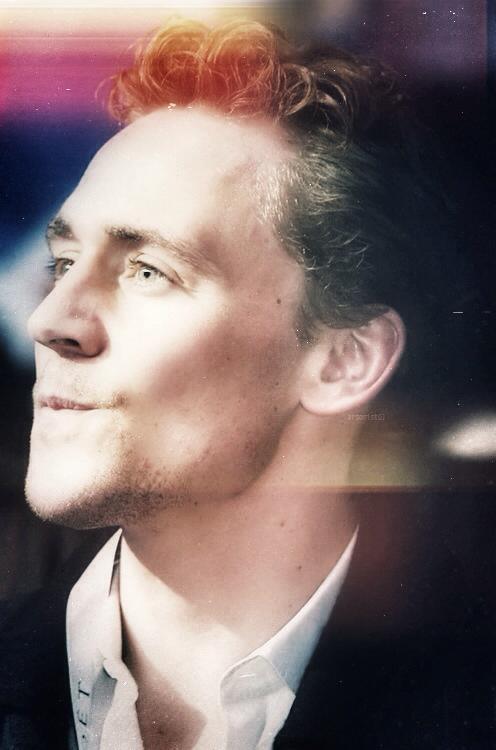 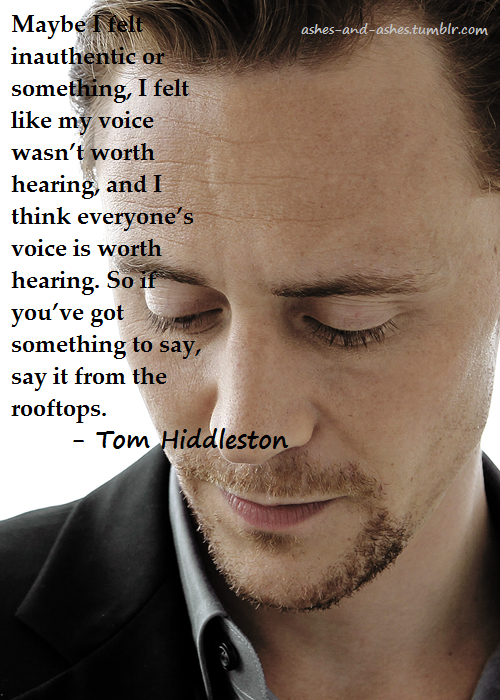 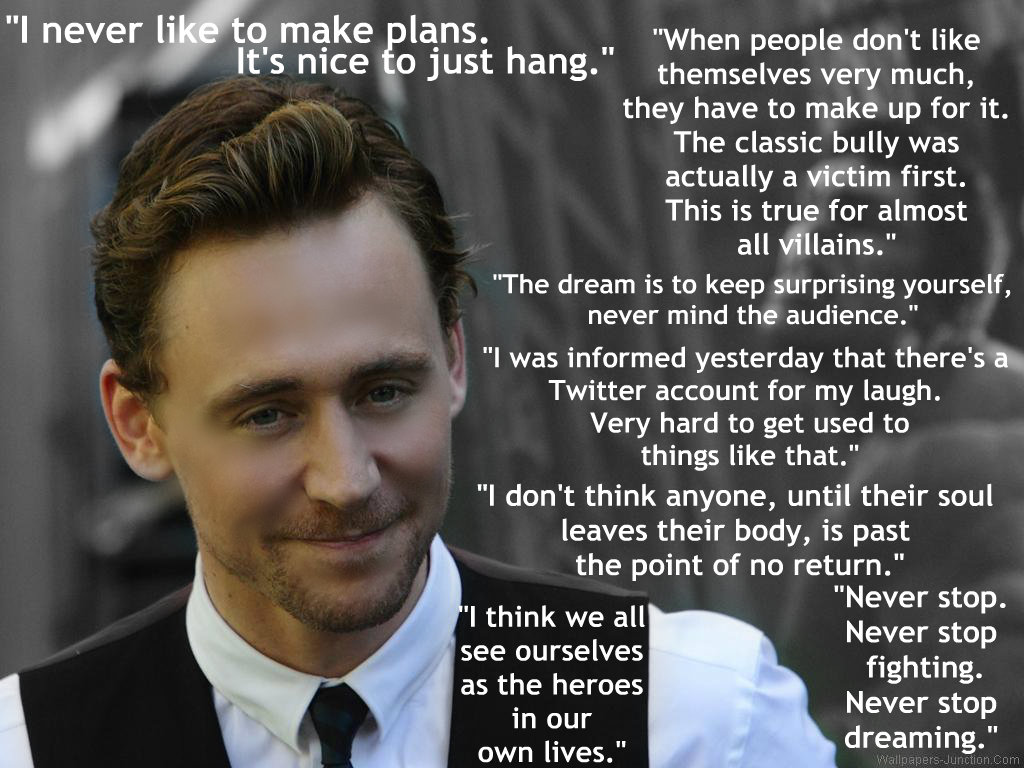 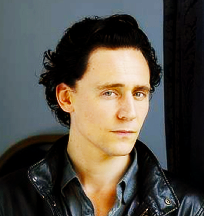 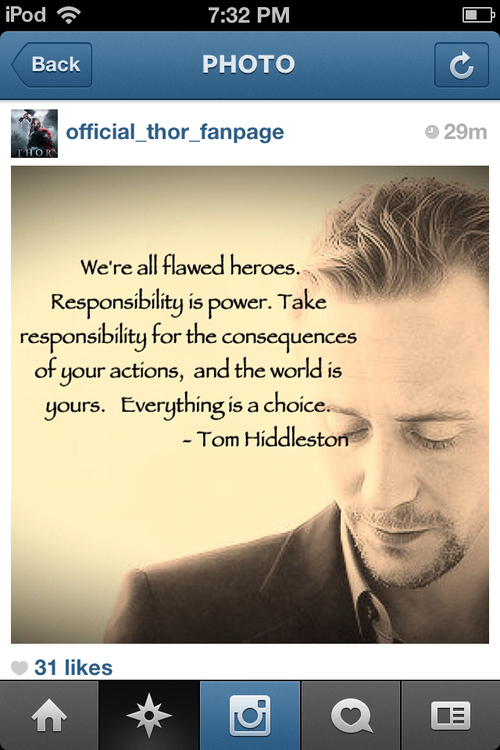 If you are at a boys' school, especially, there is a level of bravado that you have to keep up otherwise you'll get picked on.

It's like playing tennis, you play a different rally with different people. Every actor is different and the chemistry between actors is different.

Heath Ledger's performance in 'The Dark Knight' quite simply changed the game. He raised the bar not just for actors in superhero films, but young actors everywhere; for me. His performance was dark, anarchic, dizzying, free, and totally, thrillingly, dangerous.

In 'Thor,' that was my own hair. I grew it out. But I have naturally curly, blonde hair, so I'll never look like that. By the time I got to 'The Avengers,' I had come off two other films, which required me to have it very short. So I dyed it again and it was long enough to use a part of my hairline.

The thing about playing gods, whether you're playing Thor and Loki or Greco Roman gods or Indian gods or characters in any mythology, the reason that gods were invented was because they were basically larger versions of ourselves.

Actors do tend to get pigeonholed. People want to know who you are so they can put you in a box. It's lovely to be known for such diametrically opposite roles.

Chris Hemsworth is like Christopher Reeve in that he can do two things: he can wear a big red cape without a shred of self-consciousness. But he's also funny as hell, and he's so sweet. So with all the fish-out-of-water stuff, he's so funny. So he does almost two jobs in a way.

I always found the extraordinary loss of life in the First World War very moving. I remember learning about it as a very young child, as an eight- or nine-year-old, asking my teachers what poppies were for. Every year the teachers would suddenly wear these red paper flowers in their lapels, and I would say 'What does that mean?'

I did a production of 'Journey's End,' an RC Sherriff play about World War I, at the Edinburgh Festival. I was 18 and it was the first time that people I knew and loved and respected came up to me after the show and said, 'You know, you could really do this if you wanted to.'

I love the acting community at Cambridge. It's really quite committed and serious, since the days of Derek Jacobi and Ian McKellen right through to Emma Thompson and Hugh Laurie.

I thought theater people wouldn't see me if I hadn't trained. I didn't want to just be the Brideshead guy, to spend the rest of my life wearing waistcoats. I got the chance to try everything. Not just Romeos, but pimps and grandfathers and even one role as a woman in a Naomi Wallace play called Slaughter City.

I was so lucky because what I did in 'Thor' was I built the character from the ground up - the foundations of his spirit, really. He was someone who was born with an expectation that he would one day be a king, born with an entitlement.

I've done my share of period stuff. I'm not sure why, but people say I have a period face. The bread and butter of British TV is Jane Austen adaptations and bridges and bonnets and boats and horses.

Tags: Done, Sure, Why

It was quite a European war until 1917, when the Americans joined up. They don't have the same sense of the loss of innocence and the cataclysmic loss of life. A whole generation was wiped out.

Joanna points her camera at a section of society unused to having cameras pointed at it. But I don't know about categorizing them in terms of class; I'm a bit wary of that. My dad is the son of a shipbuilder.

Loki in 'Thor' is the most incredible springboard into a sort of excavation of the darker aspects of human nature. So that was thrilling, coming back knowing that I'd built the boat and now I could set sail into choppier waters.

Since my education, I've done quite untraditional things. There are very few Etonians who went to Rada. And far fewer Etonians - certainly when I was there - went to Cambridge. I don't know whether it's the same now. Most people I knew went to Oxford, because it seemed more of an easy bridge.

Some of the greatest actors have turned superheroes into a serious business: Michael Keaton and Jack Nicholson in 'Batman'; Ian McKellen and Patrick Stewart, the first venerable knights of the X-Men, who have now passed the baton to Michael Fassbender and James McAvoy.

When people don't like themselves very much, they have to make up for it. The classic bully was actually a victim first.

Ancient societies had anthropomorphic gods: a huge pantheon expanding into centuries of dynastic drama; fathers and sons, martyred heroes, star-crossed lovers, the deaths of kings - stories that taught us of the danger of hubris and the primacy of humility.

I grew up watching 'Superman.' As a child, when I first learned to dive into a swimming pool, I wasn't diving, I was flying, like Superman. I used to dream of rescuing a girl I had a crush on from a playground bully.

Much more quotes by Tom Hiddleston below the page.

For myself, for a long time... maybe I felt inauthentic or something, I felt like my voice wasn't worth hearing, and I think everyone's voice is worth hearing. So if you've got something to say, say it from the rooftops.

Tags: Everyone, Time, Worth

I don't think anyone, until their soul leaves their body, is past the point of no return.

Tags: Past, Soul, Until

I never like to make plans. It's nice to just hang.

If the Loki in 'Thor' was about a spiritual confusion - 'Who am I? How do I belong in this world?' - the Loki in 'Avengers' is, 'I know exactly who I am, and I'm going to make this world belong to me.'

The dream is to keep surprising yourself, never mind the audience.

Showing young children in these communities, that there are outlets for their feelings, that there is room in a space for their stories to be told, and that they will be applauded - and it's not about ego, it's about connection: that their pain is everybody else's pain.

Artists instinctively want to reflect humanity, their own and each other's, in all its intermittent virtue and vitality, frailty and fallibility.

I think we all see ourselves as the heroes in our own lives.

With any role, you're extending yourself and acting out things that never happened to you.

In our increasingly secular society, with so many disparate gods and different faiths, superhero films present a unique canvas upon which our shared hopes, dreams and apocalyptic nightmares can be projected and played out.

You look at the greatest villains in human history, the fascists, the autocrats, they all wanted people to kneel before them because they don't love themselves enough.

I am desperate to do a comedy now.

I'm an eternal realist and the success rate for being an actor is pretty low.

It sounds cliched, but superheroes can be lonely, vain, arrogant and proud. Often they overcome these human frailties for the greater good.

If you play it straight it's funny - the best comedy is always played straight down the middle. The adjustment is understanding from the screenplay that a moment is hilarious.

My father and I used to tussle about me becoming an actor. He's from strong, Presbyterian Scottish working-class stock, and he used to sit me down and say, 'You know, 99 percent of actors are out of work. You've been educated, so why do you want to spend your life pretending to be someone else when you could be your own man?'