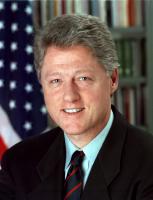 See the gallery for quotes by William J. Clinton. You can to use those 8 images of quotes as a desktop wallpapers. 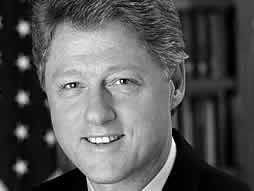 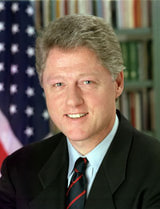 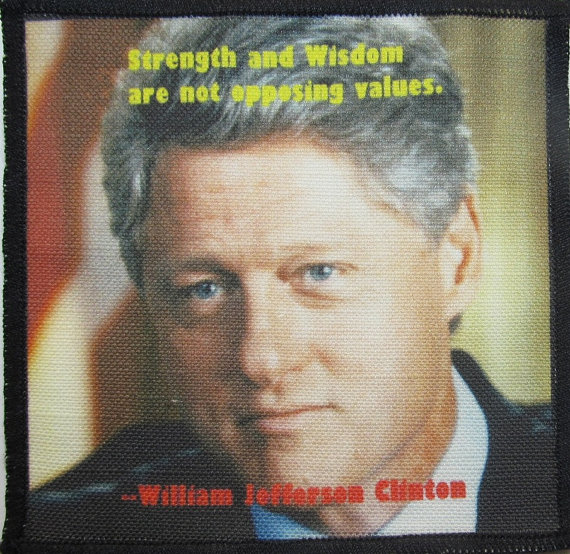 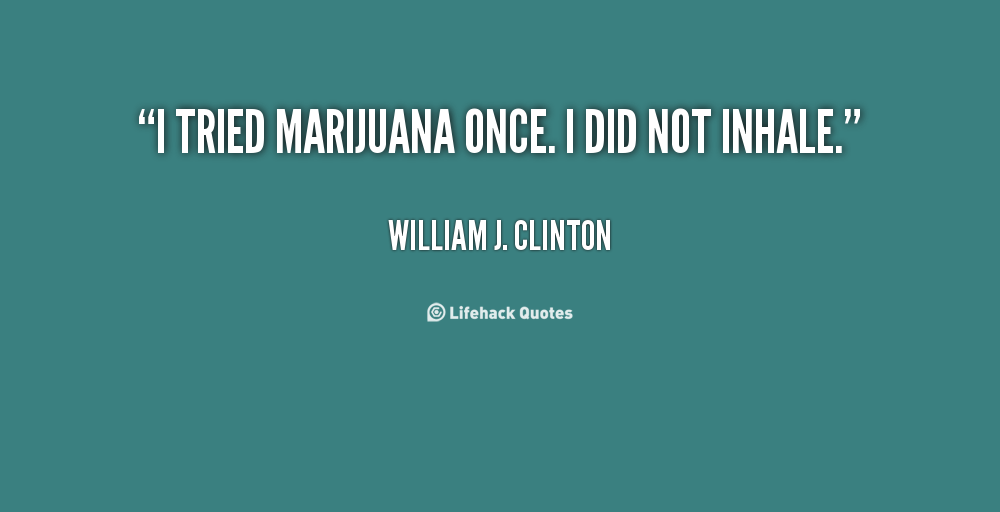 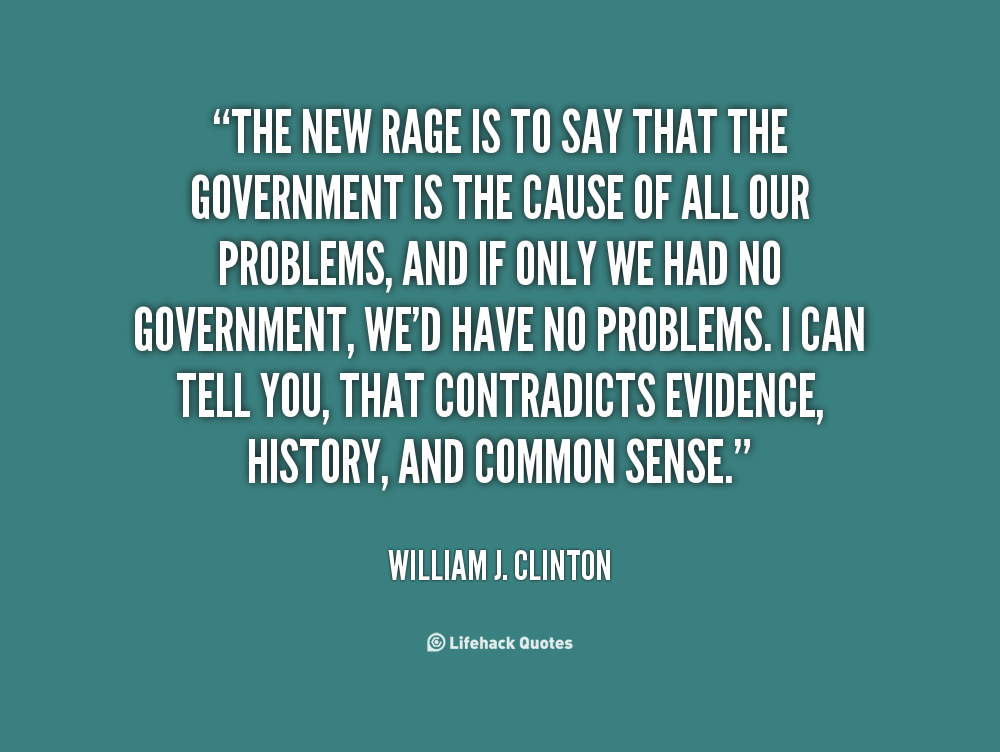 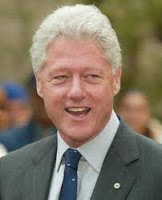 When we make college more affordable, we make the American dream more achievable.

Character is a journey, not a destination.

I don't believe you can find any evidence of the fact that I have changed government policy solely because of a contribution.

Today, many companies are reporting that their number one constraint on growth is the inability to hire workers with the necessary skills.

You are the most powerful cultural force in the world.

You know, everybody makes mistakes when they are president.

When I think about the world I would like to leave to my daughter and the grandchildren I hope to have, it is a world that moves away from unequal, unstable, unsustainable interdependence to integrated communities - locally, nationally and globally - that share the characteristics of all successful communities.

Where are the jobs going to come from?Small business, manufacturing and clean energy. Where's the money to finance them? The banks and the corporations in America today have lots of money that they can invest right now.

I came of age believing that, no matter what happened, I would always be able to support myself.

I haven't eaten at a McDonald's since I became President.

I still believe in a place called Hope.

My plan after office is to get up and spend that entire first day helping my wife move into her new senatorial office.

Tags: After, Her, Wife

Poor Darrell Hammond. What's he going to do when I leave office?

The 22nd Amendment should probably be modified to say two consecutive terms instead of two terms for a lifetime.

When I took office, only high energy physicists had ever heard of what is called the Worldwide Web... Now even my cat has its own page.

When times are tough, constant conflict may be good politics but in the real world, cooperation works better. After all, nobody's right all the time, and a broken clock is right twice a day.

I believe I'm a better authority than anybody else in America on my own wife. I have never known a person with a stronger sense of right and wrong in my life ever.

If Saddam rejects peace and we have to use force, our purpose is clear. We want to seriously diminish the threat posed by Iraq's weapons of mass destruction program.

If you want a future of shared prosperity, where the middle class is growing and poverty is declining, where the American Dream is alive and well, and where the United States remains the leading force for peace and prosperity in a highly competitive world, you should vote for Barack Obama.

In a world with no systems, with chaos, everything becomes a guerilla struggle, and this predictability is not there. And it becomes almost impossible to save lives, educate kids, develop economies, whatever.

In today's knowledge-based economy, what you earn depends on what you learn. Jobs in the information technology sector, for example, pay 85 percent more than the private sector average.

Our democracy must be not only the envy of the world but the engine of our own renewal. There is nothing wrong with America that cannot be cured by what is right with America.

President Obama has offered a plan with 4 trillion dollars in debt reduction over a decade, with two and a half dollars of spending reductions for every one dollar of revenue increases, and tight controls on future spending. It's the kind of balanced approach proposed by the bipartisan Simpson-Bowles commission.

Remember, Republican economic policies quadrupled the debt before I took office and doubled it after I left. We simply can't afford to double-down on trickle-down.

Because primarily of the power of the Internet, people of modest means can band together and amass vast sums of money that can change the world for some public good if they all agree.

Much more quotes by William J. Clinton below the page.

I am grateful to President George W. Bush for PEPFAR, which is saving the lives of millions of people in poor countries and to both Presidents Bush for the work we've done together after the South Asia tsunami, Hurricane Katrina and the Haitian earthquake.

I personally don't believe we ought to be raising taxes or cutting spending, either one, until we get this economy off the ground. I'll pay more, but it won't solve the problem.

Tags: Off, Problem, Until

If you think the President was right to open the doors of American opportunity to young immigrants brought here as children who want to go to college or serve in the military, you should vote for Barack Obama.

Tags: Against, America, Him

One way or the other, we are determined to deny Iraq the capacity to develop weapons of mass destruction and the missiles to deliver them. That is our bottom line.

Posterity is the world to come; the world for whom we hold our ideals, from whom we have borrowed our planet, and to whom we bear sacred responsibility. We must do what America does best: offer more opportunity to all and demand responsibility from all.

President Obama started with a much weaker economy than I did. Listen to me now. No president, not me, not any of my predecessors, no one could have fully repaired all the damage that he found in just four years.

President Obama's approach embodies the values, the ideas, and the direction America must take to build a 21st century version of the American Dream in a nation of shared opportunities, shared prosperity and shared responsibilities.

President Obama's record on national security is a tribute to his strength, and judgment, and to his preference for inclusion and partnership over partisanship.

When some Republican governors asked to try new ways to put people on welfare back to work, the Obama Administration said they would only do it if they had a credible plan to increase employment by 20%. You hear that? More work. So the claim that President Obama weakened welfare reform's work requirement is just not true.

Sometimes when people are under stress, they hate to think, and it's the time when they most need to think.

There is nothing wrong with America that cannot be cured with what is right in America.

When times are tough and people are frustrated and angry and hurting and uncertain, the politics of constant conflict may be good, but what is good politics does not necessarily work in the real world. What works in the real world is cooperation.

Democrats think the country works better with a strong middle class, real opportunities for poor people to work their way into it and a relentless focus on the future, with business and government working together to promote growth and broadly shared prosperity. We think 'we're all in this together' is a better philosophy than 'you're on your own.'

I am in support of the NRA position on gun control.

You can put wings on a pig, but you don't make it an eagle.

Promising too much can be as cruel as caring too little.

The new rage is to say that the government is the cause of all our problems, and if only we had no government, we'd have no problems. I can tell you, that contradicts evidence, history, and common sense.

Well, first of all, I think that a lot of the voters who are voting for the tea party candidates have really good impulses. That is, they believe that for years and years and years, the people with wealth and power or government power have done well and ordinary people have not. That's true.

Let us all take more responsibility, not only for ourselves and our families but for our communities and our country.

Being president is like running a cemetery: you've got a lot of people under you and nobody's listening.

American and Israel share a special bond. Our relationship is unique among all nations. Like America, Israel is a strong democracy, a symbol of freedom, and an oasis of liberty, a home to the oppressed and persecuted.

Let me say this as clearly as I can: No matter how sharp a grievance or how deep a hurt, there is no justification for killing innocents.

Work is about more than making a living, as vital as that is. It's fundamental to human dignity, to our sense of self-worth as useful, independent, free people.

We must teach our children to resolve their conflicts with words, not weapons.

In the new economy, information, education, and motivation are everything.

It turns out that advancing equal opportunity and economic empowerment is both morally right and good economics, because discrimination, poverty and ignorance restrict growth, while investments in education, infrastructure and scientific and technological research increase it, creating more good jobs and new wealth for all of us.

I like the job. That's what I'll miss the most... I'm not sure anybody ever liked this as much as I've liked it.

It's heartbreaking to see so many people trapped in a web of enforced idleness, deep debt, and gnawing self-doubt.

Though I often disagree with Republicans, I never learned to hate them the way the far right that now controls their party seems to hate President Obama and the Democrats.

My fellow Americans, you have to decide what kind of country you want to live in. If you want a you're on your own, winner take all society you should support the Republican ticket. If you want a country of shared opportunities and shared responsibilities - a 'we're all in it together' society, you should vote for Barack Obama and Joe Biden.

Part of our essential humanity is paying respect to what God gave us and what will be here a long time after we're gone.

Strength and wisdom are not opposing values.