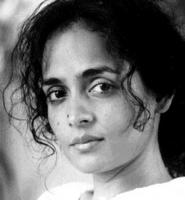 See the gallery for quotes by Arundhati Roy. You can to use those 8 images of quotes as a desktop wallpapers. 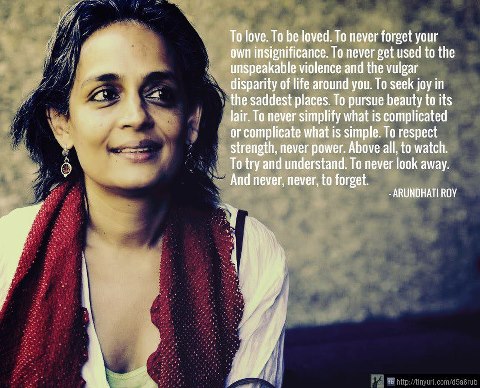 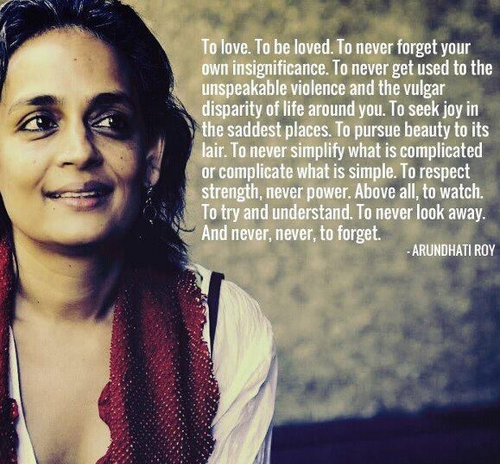 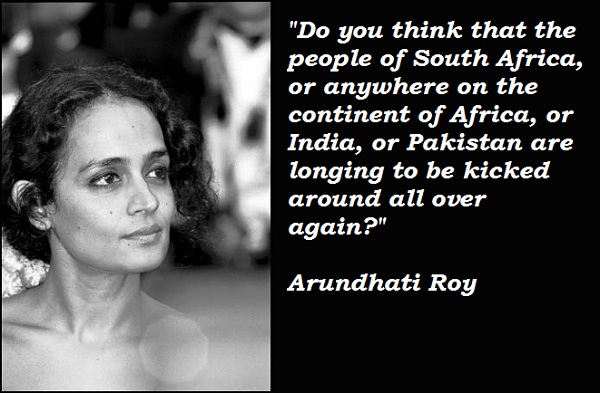 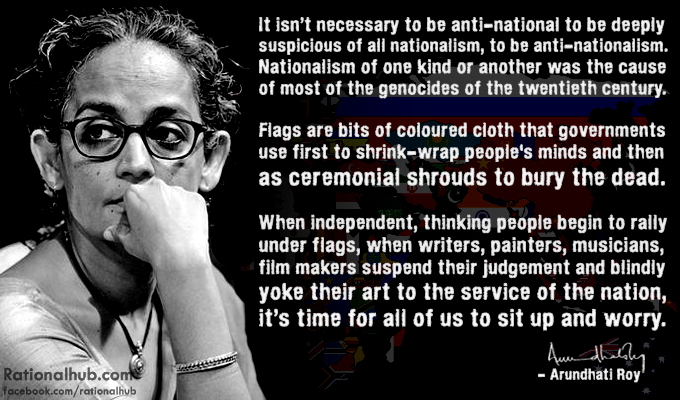 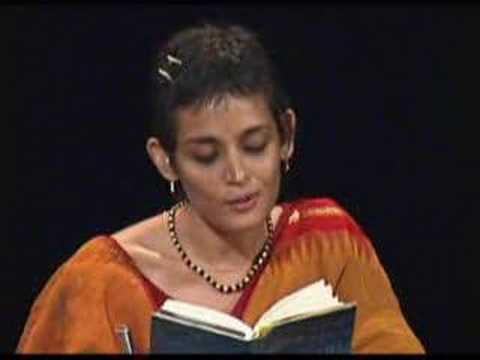 I think many people were surprised by the victory of the Congress, because it was really hard to see beyond the sort of haze of hatred that the Hindu nationalists had been spreading.

I think people ease into this careerist professionalism, so if you're a writer it's your job to manufacture books as opposed to writing them and to go to festivals and spend your life emotionally invested in reviews or the awards. You have to shrink your universe in a way. To me, it's the opposite.

I think the kind of landscape that you grew up in, it lives with you. I don't think it's true of people who've grown up in cities so much; you may love a building, but I don't think that you can love it in the way that you love a tree or a river or the colour of the earth; it's a different kind of love.

I'm living to the edges of my fingernails, using everything I have. It's impossible for me to look at things politically or in any way as a project, to further my career. You're injected directly into the blood of the places in which you're living and what's going on there.

In a way, writing is an incredible act of individualism, producing your language, and yet to use it from the heart of a crowd as opposed to as an individual performance is a conflicting thing. I do stand alone, and yet it's not about being an individual or being ambitious.

In California, there are huge problems because of dams. I'm against big dams, per se, because I think that they are economically unfeasible. They're ecologically unsustainable. And they're hugely undemocratic.

My mother is like a character who escaped from the set of a Fellini film. She's a whole performing universe of her own. Activists would run a mile from her because they could not deal with what she is.

Some writers like to boil down headlines of liberal newspapers into fiction, so they say there shouldn't be communal riots, everybody should love each other, there shouldn't be boundaries or fundamentalism. But I think literature is more than that; these are political views which most of us hold anyway.

The Congress has historically played covert communal politics in order to create what in India we call vote banks where you pit one community against another and so on in order to secure votes.

The Occupy movement found places where people who were feeling that anger could come and share it - and that is, as we all know, extremely important in any political movement. The Occupy sites became a way you could gauge the levels of anger and discontent.

There are people who have comfortable relationships with power and people with natural antagonism to power. I think it's easy to guess where I am in that.

Torture has been privatized now, so you have obviously the whole scandal in America about the abuse of prisoners and the fact that, army people might be made to pay a price, but who are the privatized torturers accountable too?

When I decided to write 'The God of Small Things', I had been working in cinema. It was almost a decision to downshift from there. I thought that 300 people would read it. But it created a platform of trust.

Years of imprisoning and beheading writers never succeeded in shutting them out. However, placing them in the heart of a market and rewarding them with a lot of commercial success, has.

You begin to realize that hypocrisy is not a terrible thing when you see what overt fascism is compared to sort of covert, you know, communal politics which the Congress has never been shy of indulging in.

Another world is not only possible, she is on her way. On a quiet day, I can hear her breathing.

Tags: Another, Her, She

Tags: Against, Christian, Side

I do what I do, and write what I write, without calculating what is worth what and so on. Fortunately, I am not a banker or an accountant. I feel that there is a time when a political statement needs to be made and I make it.

When you say things like, 'We have to wipe out the Taliban,' what does that mean? The Taliban is not a fixed number of people. The Taliban is an ideology that has sprung out of a history that, you know, America created anyway.

You have come to a stage where you almost have to work on yourself. You know, on finding some tranquility with which to respond to these things, because I realize that the biggest risk that many of us run is beginning to get inured to the horrors.

The fact is that America's weapons systems have made it impossible for anybody to confront it militarily. So, all you have is your wits and your cunning, and your ability to fight in the way the Iraqis are fighting.

Fiction is too beautiful to be about just one thing. It should be about everything.

Much more quotes by Arundhati Roy below the page.

I could have lived anywhere in the world now if I wanted to.

I have truly known what it means for a writer to feel loved.

I kind of resent the idea that the whole world has to be interested in the American elections.

I think one of the saddest things that's happening to literature is that it's getting over-simplified by this diet of simple political ideas.

Novels are such mysterious and amorphous and tender things.

Pity the nation that has to silence its writers for speaking their minds.

There can be nothing more humiliating for a writer of fiction to have to do than restate a case that has already been made.

All my books are accidental books - they come from reacting to things and thinking about things and engaging in a real way. They are not about, 'Oh, did it get a good review in the Guardian?' I don't care.

As a writer, I have to go to a different place now. As a person... I want to step off whatever this stage is that I have been given. The argument has been made, the battle remains to be fought - and that requires a different set of skills.

Do you think that the people of South Africa, or anywhere on the continent of Africa, or India, or Pakistan are longing to be kicked around all over again?

Everybody can't have the life of a normal, average American person in India - they can't. So, it's about egalitarianism. It's about sharing things more equally. It's about access to natural resources.

I am very conscious that, from the time of 'The God of Small Things' was published 10 years ago, we are in a different world... which needs to be written about differently, and I really very much want to do that.

I don't want to play these games of statistics any more; I have done that. I don't want to be imprisoned by that, or by the morality that is expected of activists. I have never been that pristine person, that role model.

I have nothing against romance. I believe that we must hold on to the right to dream and to be romantic. But an Indian village is not something that I would romanticize that easily.