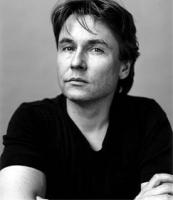 See the gallery for quotes by Esa-Pekka Salonen. You can to use those 7 images of quotes as a desktop wallpapers. 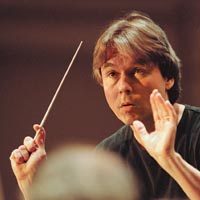 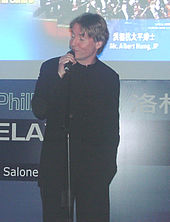 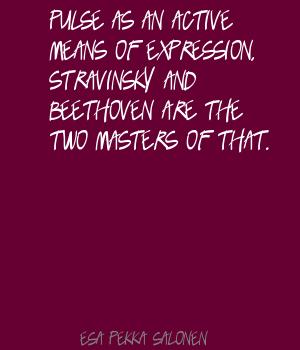 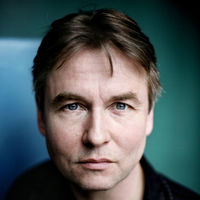 When we're at the end of The Rite of Spring or of a Bruckner symphony, I want people to feel the music physically.

With American orchestras, in particular, because they play in such huge halls, getting a true pianissimo is very hard.

I discovered that the people of the North are different and there's no way you can make a person from the North similar to a Southerner. They're two different worlds.

I don't believe in an annual dose of film music for the sake of it being film music. If we program film music, it will be because there is a real artistic reason for doing so.

If the seams are showing, there is something wrong with the performance or the construction of the piece. This idea is completely at odds with our modern visual experience, because everything today is based on montage.

The act of conducting in itself, of waving my arms in the air and being in charge, I didn't miss. I missed the sensual pleasure of being in contact with music.

The Northern idea of form is more of a process. The various units of the form overlap. You can't tell where some things stop and new things start. This is typical of Sibelius.

The players never think they project enough. In a hall that seats 3,300 people, it's a very scary thing to play so quietly that you can barely hear yourself.

The sound was my greatest concern. There were certain difficulties getting used to the way every musician can hear his or herself, the way each of them relates to the musician in the next seat.

There is more openness in LA to possibilities than on the East Coast of America. There is a pioneering spirit there that stems from the reason people went out there in the first place-to find something new.

This continuity of sound and form was something that I became really interested in from working with Ligeti. He was always going on about how form has to be continuous.

I'm still disturbed if a chord isn't together, but your priorities change as you get older.

In Europe, there is so much tradition, and everyone has established ideas as to what art should be and what it has always been.

After working with Ligeti I began to hear Brahms and Beethoven differently.

Anyone who composes and conducts at the same time is immediately suspect, because he must be faking one or the other.

As we watch TV or films, there are no organic transitions, only edits. The idea of A becoming B, rather than A jumping to B, has become foreign.

Every day we make more progress toward understanding the concert hall.

I always had, deep down, a slight aversion toward the purely cerebral in music.

I can't imagine how many first performances I've done, perhaps 500. Some of them have been very good, and some of course very bad.

I feel very free and very happy to be a composer.

I love a visceral sound, the kind that hits you in the belly.

I've learned a lot from the masters of orchestration, like Ravel and Stravinsky.

Much more quotes by Esa-Pekka Salonen below the page.

In the range of music that we play - roughly 300 years' worth-there really are more similarities than differences.

Los Angeles is just a more open place. The way L.A. functions is that people give you a forum. They say, Show us what you can do.

Music has just as much to do with movement and body as it does soul and intellect.

My music wouldn't sound the way it does if I hadn't had the experience of conducting.

Once you get over the first hill, there is always a new, higher one lurking, of course.

Orchestras have become used to the emphasis on the separation of layers, of the ultimate precision and clarity.

Pulse as an active means of expression, Stravinsky and Beethoven are the two masters of that.

Stravinsky is masterly: his harmony is conceived so precisely that it can only be the way it is.

The music I turn out these days is the kind of music I want to hear myself.

The Royal Festival Hall in London is nice; people hang out there. I think this inviting, non-exclusive character is very important.

There is such a suspicion in today's world of people who do more than one thing, who aren't specialized.

There will have to be times when I'm not conducting because I'm composing. I haven't solved that problem, and perhaps I never will.

This conducting thing happened. In 1983 I was sucked into this international career, which was a very scary experience.

This country, and the West Coast, especially, is bad at preserving any cultural legacy.