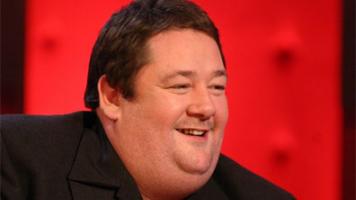 See the gallery for quotes by Johnny Vegas. You can to use those 8 images of quotes as a desktop wallpapers. 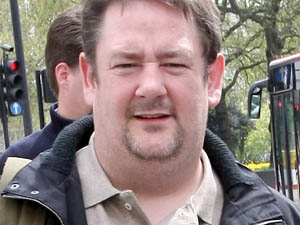 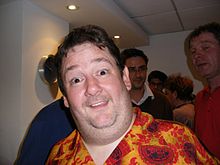 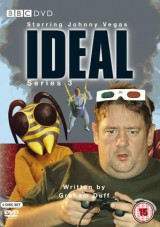 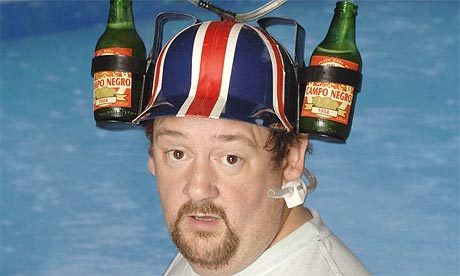 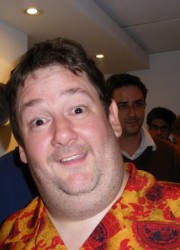 I've got too much respect for stand-ups to call myself one.

If an original piece of wardrobe came up from Star Wars, I'd probably spend a lot of money on it.

It can be tough as a jobbing actor.

My first holiday to San Francisco in 1998-99 was supposed to be a two-week vacation but I ended up staying five weeks and nearly didn't come home.

My work's never been accepted by my family, but it's something I'll always carry on with.

Never try to be witty with U.S. airport officials. It's always lost on them and you'll find yourself being put back on the plane.

The cheese board is my big treat at Christmas that I have to deny myself during the rest of year.

The idea of being on TV 24 hours a day and people seeing the real me... No.

There is something more spiritual to us than what we are on this earth, but how you access it I'm not sure.

This autocue was obviously written for someone else and I've been brought in at the last minute.

Tags: Else, Last, Someone

Up North you are holding your own. Everyone considers themselves a comedian.

Tags: Everyone, Holding, Themselves

With stand-up you've just got that one chance. Audiences can be quite fickle.

You always hear people saying, 'I hope I'm not turning into my dad', but I'd be honoured if I became half as decent a bloke as he is.

You can sway an audience if you win the women over. The gentlemen will follow 'cause they can be so foolish like that at times, they are easily led.

You can't be a proper comic unless you've been out on stage and felt the fear.

You don't want to be flattered and become big-headed by getting awards. But, well, I am.

You know, there's that temptation in interviews to make yourself sound - well, to give yourself a bit of mystery.

Tags: Give, Temptation, Yourself

I also want to return to doing stand-up. I've become frightened of live audiences. This is a really telling sign that I need to go back on the comedy circuit again.

I came back from university thinking I knew all about politics and racism, not knowing my dad had been one of the youngest-serving Labour councillors in the town and had refused to work in South Africa years ago because of the situation there. And he's never mentioned it - you just find out. That's a real man to me. A sleeping lion.

I get obsessed with decorations and decorating the house. I keep it tasteful outside, but when you get inside it is a bit like Blackpool illuminations, I go bonkers!

I love the way my weight fluctuates in the newspapers. It was 18 stone and then people look at a bad picture of me and add a few more stone on. I think the highest was 22 stone.

Much more quotes by Johnny Vegas below the page.

I think I'm realising more and more that I've got a job to do and I can't be doing the big nights out and working to my full potential the next day. I feel much better for it.

I think it sort of dawns on you that if you're not gigging constantly you're not actually relevant. You may be relevant to a different part of the media now, to television commissioners and editors, but to a young live-comedy audience you're not, really.

I used to be good with kids, but as I get older, I'm grumpy and terrible with them. As for doing a gig at a 6-year old's birthday party, you couldn't pay me enough.

I'm loath to use my personal life to promote what I do, but at the same time, I don't like a journalist going away with no more than you could get off Wikipedia, where most of it's invented anyway.

I've always said that with kids' TV that people get stuck in it from drama school but that's not fair because I know myself that when you go in creatively, kids are so much more open to ideas. You're so much freer to mess about and try things.

There have been times I've finished a big job and thought, 'Great, a couple of weeks off.' But then a couple of weeks turns to three weeks and then after a month you're staring at the phone willing it to ring.

There's lots of stuff about me being a fan of Cliff but not being gay. Which suggests that he is, but he's not. Anyway, this is Channel 4, let their lawyers sort it out.

There's this idea that it has to be made in London. But we've got everything up here, and if you've got comics who are gifted because of where they're from, you shouldn't drag them away from that natural resource.

They look outside the windows of their apartment in town and realize they're not living in a terrace anymore. This is a room full of dreamers who like to go to London for a day.

We had a week off in the middle of shooting, but as soon as everyone stopped, we all went down with six different types of flu and other unmentionable diseases.

Tags: Everyone, Off, Week

It is easy for me to love myself, but for ladies to do it is another question altogether.

I trained to be a priest - started to. I went to seminary school when I was 11. I wanted to be a priest, but when they told me I could never have sex, not even on my birthday, I changed my mind.

I actually enjoy being heckled; it keeps it interesting, and I think it is a nice feeling for people once they have left the show.

We all have days where we can't pronounce things or give it the emotion it deserves.

When I wasn't as attractive as I am now, I suffered at the hands of cruel children and their taunts until I realised that confidence and a bit of aesthetic care can overcome that.

Baldness is visually enough of a stigma as it is without a big sweaty bloke on stage pointing it out.

Comedy's so subjective, and if someone comes to watch, doesn't get it, doesn't find it funny, then fine.

For the greater good, I thought I should be a spiritual leader for people for some reason.

Had I become a priest, the sermons would've been electric!

Health-wise, I couldn't have said what my life expectancy would've been if I'd just carried on doing solid blocks of stand-up.

I am a big fan of smelly cheeses but the rest of the family don't seem to be particularly keen on them.

I avoid any kind of organised trips as that's one of my bugbears.

I believe that Britain is becoming more class-conscious, and I quake at the very idea of Old Etonians ruling the world again.

I had a massive amount of self-belief when I did stand-up.

I hate flying, airports and the whole rigmarole - queuing up, security and lost luggage.

I still give myself the right to be highly critical of others, though.

Tags: Give, Others, Though

I think if you're at the point where you're popular enough to sell your wedding photos to OK! Magazine then you don't need the money.

I use very few muscles at the best of times.

I used to attract a lot of feeders. I'd be quite happy to be locked in someone's flat and fed liquidised burgers.

I'm getting positive feedback for my acting so we'll see if any other interesting parts come up.

I've always been looking for other people's approval.

I've got little ankles and a bit of a belly, so it makes me look rather an egg on legs.

I've got my finger in a lot of pies.