See the gallery for quotes by Martin Sheen. You can to use those 7 images of quotes as a desktop wallpapers. 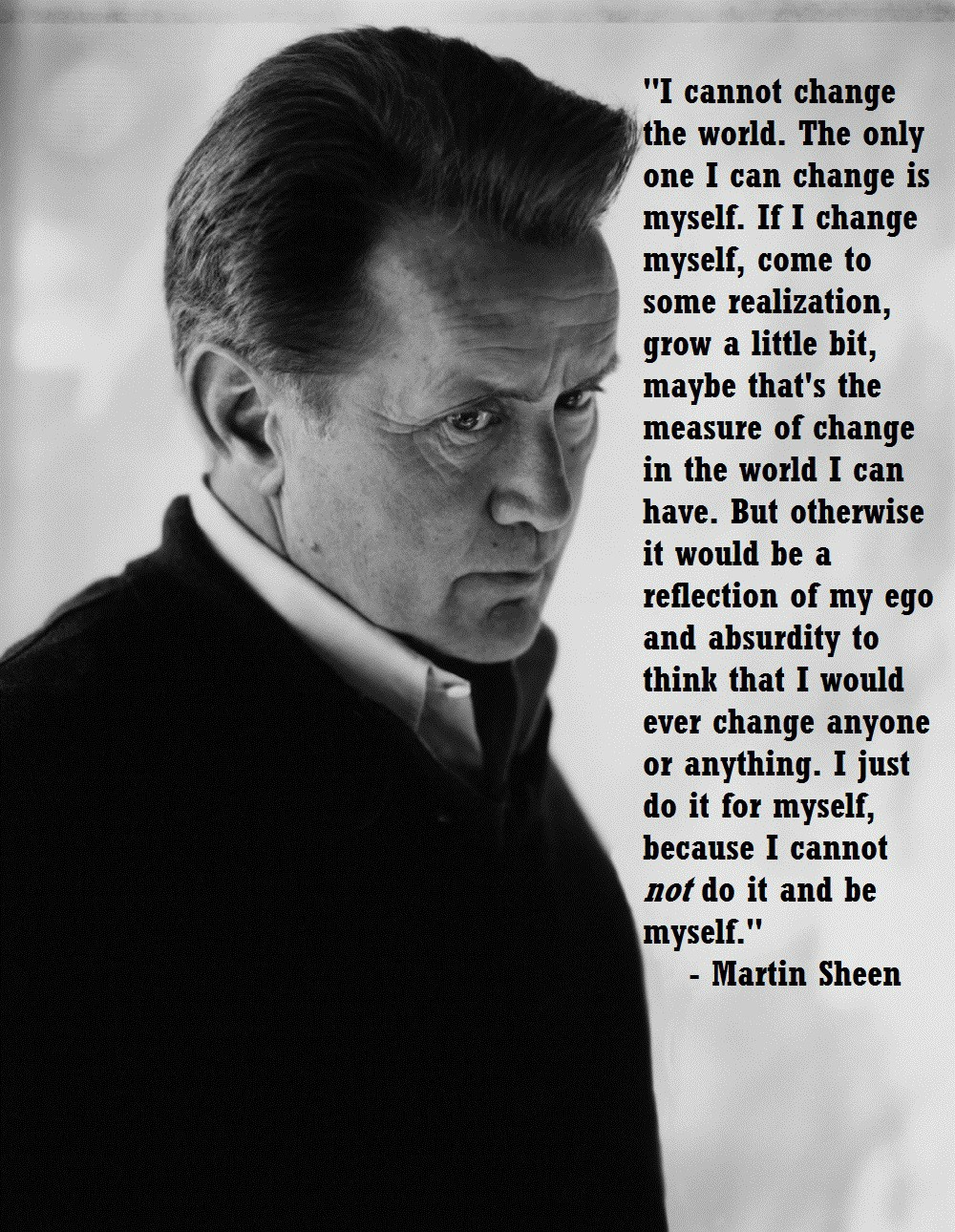 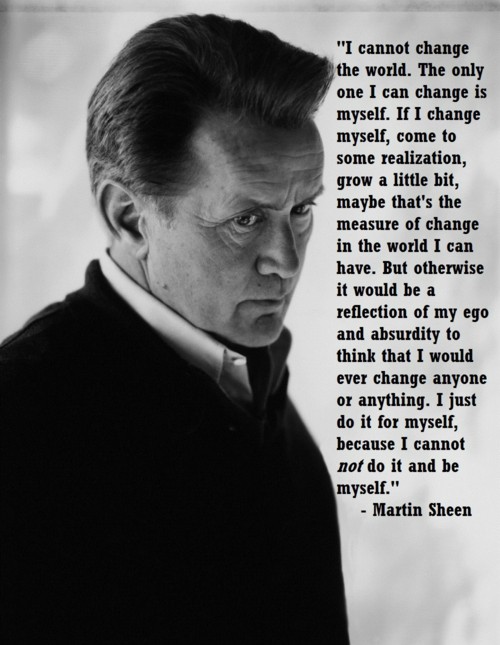 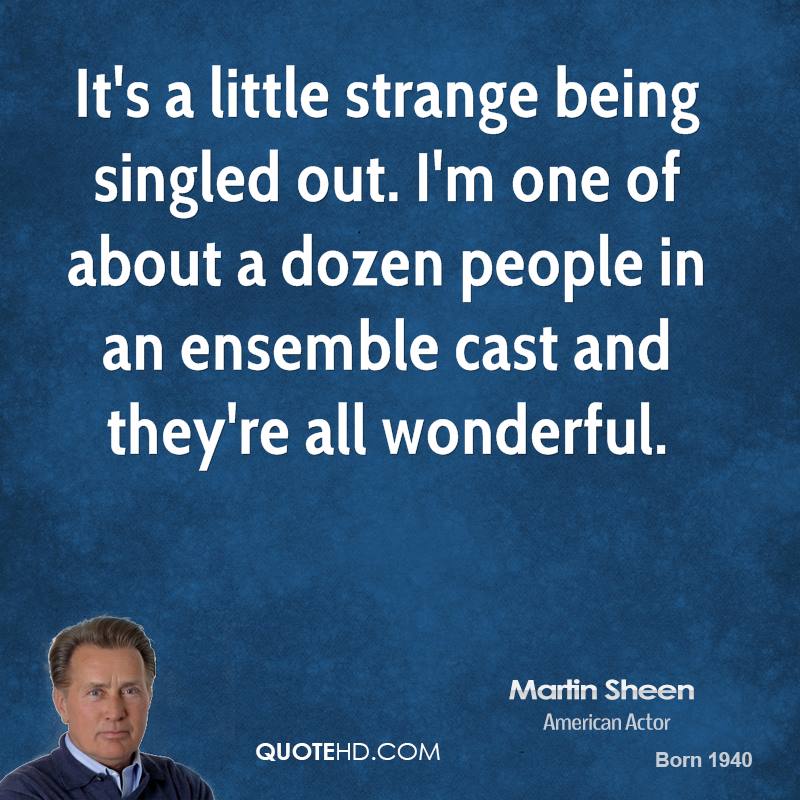 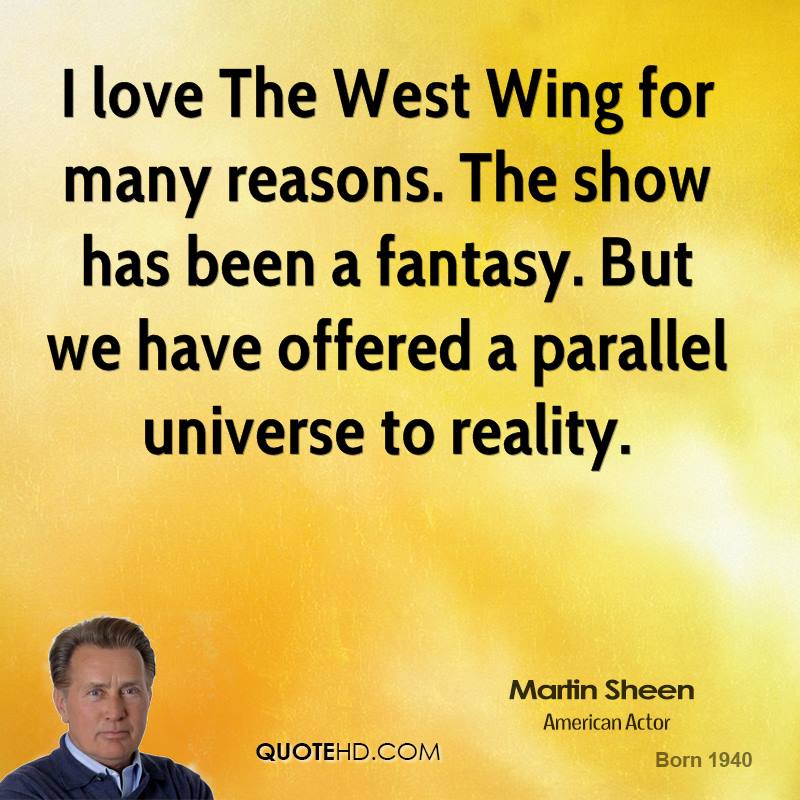 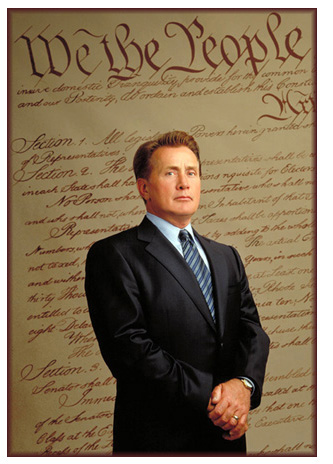 War at this time and in this place is unwelcome, unwise, and simply wrong.

You never know when you are doing something that is affecting someone.

Golf is fundamentally about being honest. I see people hit eight shots and tell me they shot five. I never say a word. It is a reminder to me of what is at stake.

I am a very conscientious golfer. I count every stroke. I learned to play that way. That is the only way I can play. It taught me to be honest. There is no greater virtue than honesty.

I personally am opposed to abortion, but I will not judge anybody else's right in that regard because I am not a woman and I could never face the actual reality of it.

That is someone who follows the teachings of the nonviolent Jesus and takes the gospel personally, and then pays the price. I fall into that category.

This Administration has led us into an area without vision. Bush has no clear understanding of what is being asked of the citizens, and the military is under his direction.

We think of violence as being conflict and fighting and wars and so forth, but the most ongoing horrific measure of violence is in the horrible poverty of the Third World... and the poverty in the United States as well.

When I reached adulthood, even now, I could afford to belong to a country club. But I could never belong to a private club because of my experience as a child, because it would isolate me from the whole of humanity.

I honestly do not know if civil disobedience has any effect on the government. I can promise you it has a great effect on the person who chooses to do it.

What we try to say is that it doesn't matter if you are a Republican or a Democrat or conservative or independent. You are equally responsible for your place in the culture, and you must make a contribution, and you must accept responsibility for what goes down on your watch.

And there are so many people in the third world suffering so horribly right now, and we are so focused on ourselves and our culture that a lot of things are showing up in our culture that are making it impossible for us to focus on others. We're so self-focused.

It doesn't really matter how much of the rules or the dogma we accepted and lived by if we're not really living by the fundamental creed of the Catholic Church, which is service to others and finding God in ourselves and then seeing God in everyone - including our enemies.

I am not the President. Instead, I hold an even higher office, that of citizen of the United States.

I never went to college when I was young and am looking forward to giving it a try... at age 65!

I still believe in the nonviolent Jesus and the basic human goodness present in all of us.

I think President Clinton was probably the brightest President of the 20th century.

Much more quotes by Martin Sheen below the page.

I think the Church is a conduit to God. The Church is not God. And I think that from the very beginning Jesus taught us that.

Well, I think that Catholicism's basic foundation of faith is personal conscience. I think it's between you and God, not you and the Church.

Future generations are not going to ask us what political party were you in. They are going to ask what did you do about it, when you knew the glaciers were melting.

Those years on the golf course as a caddie, boy, those people were something. They were vulgar, some were alcoholics, racist, they were very difficult people to deal with. A lot of them didn't have a sense of humor.

Anybody who plays golf will tell you that you play against yourself.

Tags: Against, Tell, Yourself

George W Bush is like a bad comic working the crowd, a moron, if you'll pardon the expression.

I don't think that people in America are really given enough information about the Third World.

I just think that the only way we come to ourselves is through each other.

I started caddying when I was nine years old at a very exclusive country club in Dayton, Ohio. And I saw how the other half lived, if you will.

I'm one of those cliff-hanging Catholics. I don't believe in God, but I do believe that Mary was his mother.

It is my pleasure to support a candidate who truly reflects our values and highest ideals.

My first civil disobedience arrest for social justice was in 1986 for protesting the SDI.

The key word about The West Wing is show. It is not a reality show. It has nothing to do with reality.

There's no way that I could be the president. You can't have a pacifist in the White House... I'm an actor. This is what I do for a living.