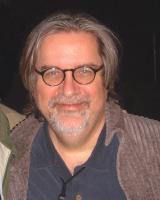 See the gallery for quotes by Matt Groening. You can to use those 7 images of quotes as a desktop wallpapers. 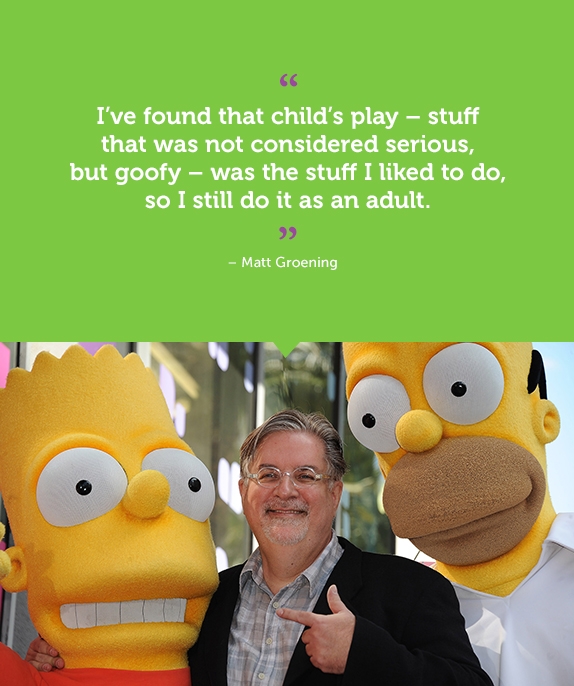 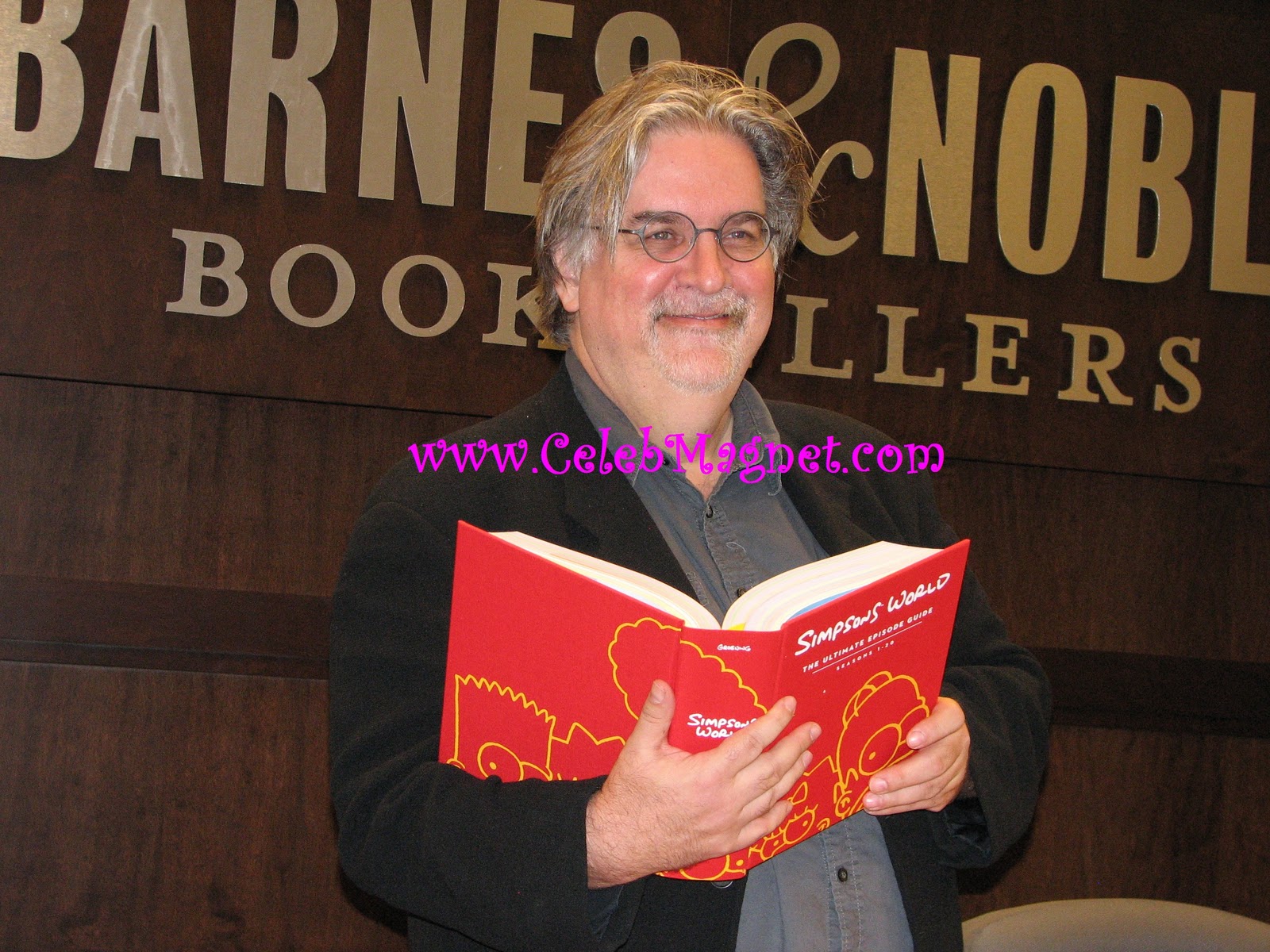 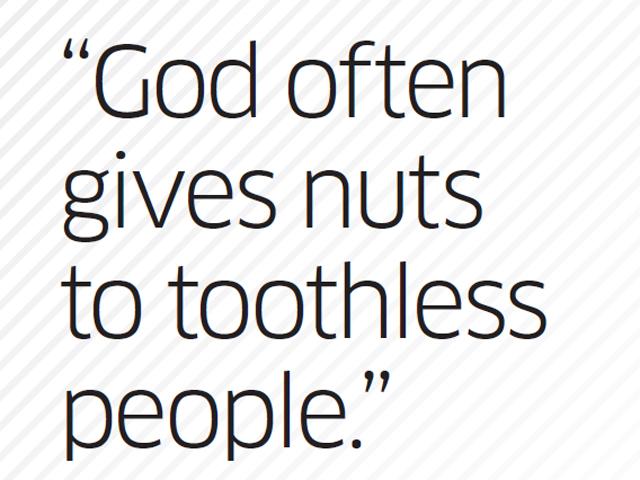 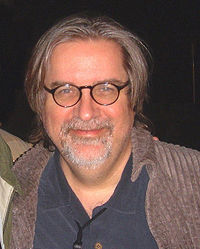 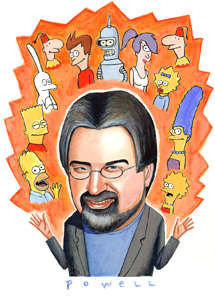 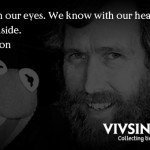 It's just hard not to listen to TV: it's spent so much more time raising us than parents have.

Love is a perky elf dancing a merry little jig and then suddenly he turns on you with a miniature machine gun.

Most TV shows don't reward you for paying attention.

'The Simpsons' is an especially collaborative show.

We've been running a little behind schedule. But only by about 15 years or so.

We've got a bunch of new writers now who tell me they grew up watching The Simpsons. It's bizarre, and they're writing some very funny stuff.

Well, most grown-ups forget what it was like to be a kid. I vowed that I would never forget.

Our solution on 'The Simpsons' is to do jokes that people who have an education, or some frame of reference, can get. And for the ones who don't, it doesn't matter, because we have Homer banging his head and saying, 'D'oh!'

A lot of people believe that if everybody just did what they were told - obeyed - everything would be fine. But that's not what life is all about. That's not real. It's never going to happen.

I draw a weekly comic strip called Life in Hell, which is syndicated in about 250 newspapers. That's what I did before The Simpsons, and what I plan to do for the rest of my life.

I love the idea that we put in jokes the kids don't get. And that later, when they grow up and read a few books and go to college and watch the show again, they can get it on a completely different level.

I think 'Family Guy' and 'American Dad' have definitely staked out their own style and territory, and now the accusations are coming that 'The Simpsons' is taking jokes from 'Family Guy.' And I can tell you, that ain't the case.

I've loved science fiction ever since I was a little kid, mainly from looking at the covers of science-fiction magazines and books, and I've read quite extensively as an adult.

One of the things I would like to do is make up stories that I would have enjoyed when I was a kid. So, if I'm thinking about an audience, it's usually a younger version of myself.

Since I was there in the very beginning, I know the history of the characters. So, I make comments about the tone and sometimes remind the writers that we've done that before.

Sometimes people get mad at The Simpsons' subversive story telling, but there's another message in there, which is a celebration of making wild, funny stories.

The thing that makes me happiest about Simpsons Illustrated are all the drawings that we get from readers. I wish we could print them all. They're really imaginative. They show a lot of hard work.

The writers led by Mike Scully are fantastic. And they're creating original stories that not only don't repeat what we've already done, they also don't repeat anything I've seen on television.

When The Simpsons came around, there really was nothing else like it on TV. It's hard to imagine, but when Fox first took the plunge with it, it was considered controversial to put animation on prime time.

Love is a snowmobile racing across the tundra and then suddenly it flips over, pinning you underneath. At night, the ice weasels come.

Living creatively is really important to maintain throughout your life. And living creatively doesn't mean only artistic creativity, although that's part of it. It means being yourself, not just complying with the wishes of other people.

Much more quotes by Matt Groening below the page.

Here's to alcohol: the cause of, and answer to, all of life's problems.

Sometimes people try to read into my strip and find out what my state of mind is. And I can say if I'm in a good mood, generally the comic strip starts out in a good mood, but the punchline is very negative and sour.

When authorities warn you of the sinfulness of sex, there is an important lesson to be learned. Do not have sex with the authorities.

It's a funny show. The characters are surprisingly likable, given how ugly they are. We've got this huge cast of characters that we can move around. And over the last few seasons, we've explored some of the secondary characters' personal lives a bit more.

A lot of our writers, like Conan O'Brien, moved on to other things.

Basically, everything I try to do is to present an alternative to what somebody else is doing.

Tags: Else, Somebody, Try

Because good writing in a TV cartoon is so rare, I think the animation on The Simpsons is often overlooked.

Cartooning is for people who can't quite draw and can't quite write. You combine the two half-talents and come up with a career.

Donuts. Is there anything they can't do?

Everybody doesn't have to get every joke. People really appreciate not being condescended to.

I also found child's play - stuff that was not considered serious, but goofy - was the stuff I liked to do, so I still do it as an adult.

I like the 'Simpsons' pinball machines. Those are pretty great.

I think in daily newspapers, the way comic strips are treated, it's as if newspaper publishers are going out of their way to kill the medium.

I was always frightened by taverns. They just seemed like very unpleasant places to go.

I'm a writer who just happens to draw.