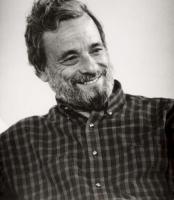 See the gallery for quotes by Stephen Sondheim. You can to use those 6 images of quotes as a desktop wallpapers. 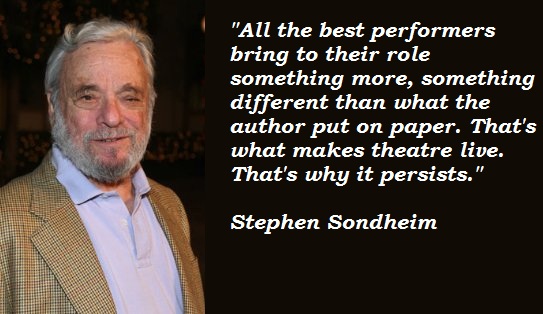 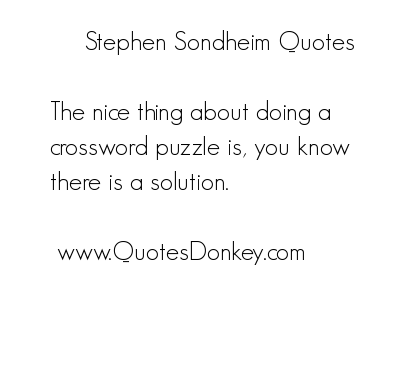 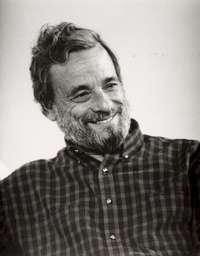 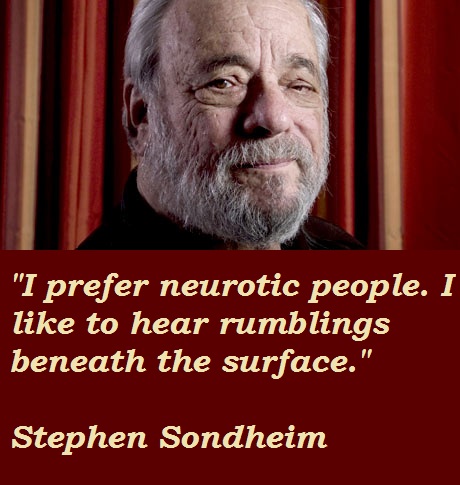 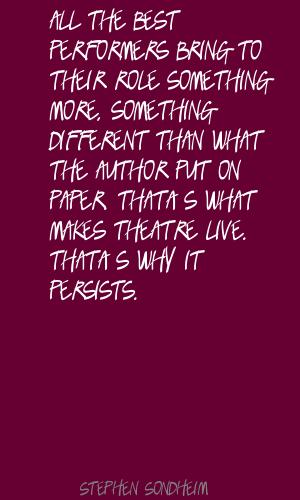 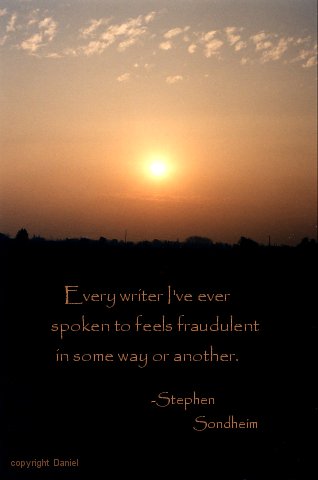 Math and music are intimately related. Not necessarily on a conscious level, but sure.

My idea of heaven is not writing.

Nowadays, there are sometimes more producers than there are people in the cast, because it takes that much money to put a show on.

One of the hardest things about writing lyrics is to make the lyrics sit on the music in such a way that you're not aware there was a writer there.

So many good songs get written fast, because you know exactly what has to work.

The more restrictions you have, the easier anything is to write.

The movie adaptations of stage musicals that I've seen, without exception, in my opinion don't work. A lot of people would disagree with me.

There's something inimical about the camera and song.

When I was growing up, there was no such thing as Off-Broadway. You either got your show on or you didn't.

When the audience comes in, it changes the temperature of what you've written.

When you know your cast well and their strengths and weaknesses, you can start writing for them, just the way Shakespeare wrote for his actors.

You can't have personal investors anymore because it's too expensive, so you have to have corporate investment or a lot of rich people.

On stage, generally speaking, the story is stopped or held back by songs, because that's the convention. Audiences enjoy the song and the singer, that's the point.

The worst thing you can do is censor yourself as the pencil hits the paper. You must not edit until you get it all on paper. If you can put everything down, stream-of-consciousness, you'll do yourself a service.

I firmly believe lyrics have to breathe and give the audience's ear a chance to understand what's going on. Particularly in the theater, where you have costume, story, acting, orchestra.

I love the theater as much as music, and the whole idea of getting across to an audience and making them laugh, making them cry - just making them feel - is paramount to me.

I played the organ when I went to military school, when I was 10. They had a huge organ, the second-largest pipe organ in New York State. I loved all the buttons and the gadgets. I've always been a gadget man.

Much more quotes by Stephen Sondheim below the page.

Musicals are, by nature, theatrical, meaning poetic, meaning having to move the audience's imagination and create a suspension of disbelief, by which I mean there's no fourth wall.

My mother wanted me off her hands. She was a working woman. She designed clothes, and she was a celebrity collector. It's my mother's ambition to be a celebrity.

One difference between poetry and lyrics is that lyrics sort of fade into the background. They fade on the page and live on the stage when set to music.

The fact is popular art dates. It grows quaint. How many people feel strongly about Gilbert and Sullivan today compared to those who felt strongly in 1890?

All the best performers bring to their role something more, something different than what the author put on paper. That's what makes theatre live. That's why it persists.

Art, in itself, is an attempt to bring order out of chaos.

I chose and my world was shaken. So what? The choice may have been mistaken; the choosing was not. You have to move on.

I prefer neurotic people. I like to hear rumblings beneath the surface.

Nice is different than good.

If people have split views about your work, I think it's flattering. I'd rather have them feel something about it than dismiss it.

By the time I was 22, I was a professional. A young and flawed professional, but not an amateur.

The nice thing about doing a crossword puzzle is, you know there is a solution.

Every writer I've ever spoken to feels fraudulent in some way or other.

My personal life and my artistic life do not interfere with each other.

The dumbing down of the country reflects itself on Broadway. The shows get dumber, and the public gets used to them.

A close-up on screen can say all a song can.

After the Rodgers and Hammerstein revolution, songs became part of the story, as opposed to just entertainments in between comedy scenes.

Tags: After, Between, Revolution

Everyone I used to play with has either given up or is dead.

Generally, the best recording is the original cast, because that's the way the piece grew: integrally, with them.

Gotta watch out for directors.

I don't listen to recordings of my songs. I don't avoid it, I just don't go out of my way to do it.

I fell into lyric writing because of music. I backed into it.

I really don't want to write a score until the whole show is cast and staged.

I was raised to be charming, not sincere.

I would have been a geologist.

If you're dealing with a musical in which you're trying to tell a story, it's got to sound like speech. At the same time it's got to be a song.

In the Rodgers and Hammerstein generation, popular hits came out of shows and movies.

Lyrics have to be underwritten. That's why poets generally make poor lyric writers because the language is too rich. You get drowned in it.