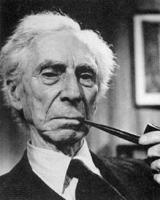 See the gallery for quotes by Bertrand Russell. You can to use those 8 images of quotes as a desktop wallpapers. 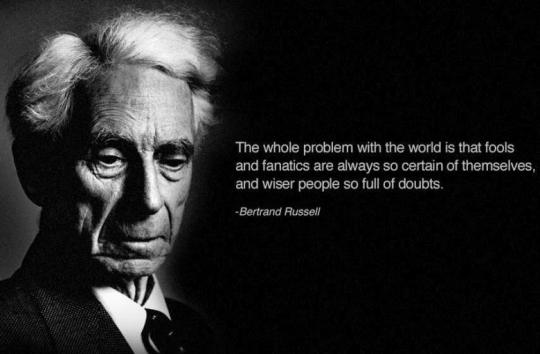 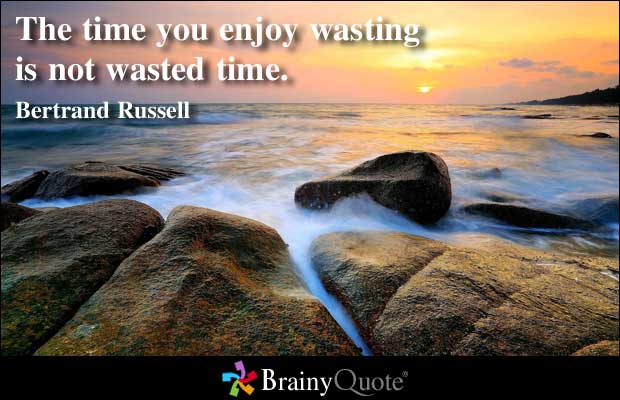 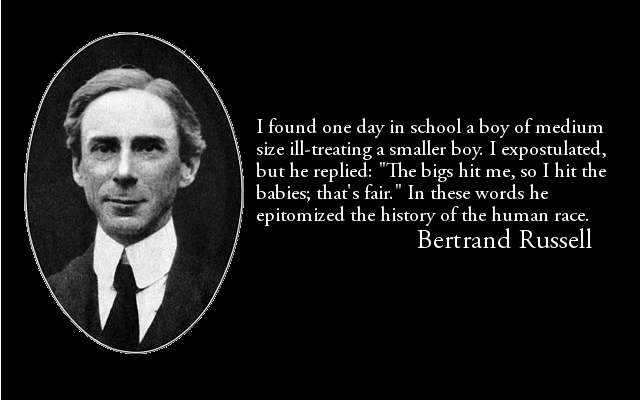 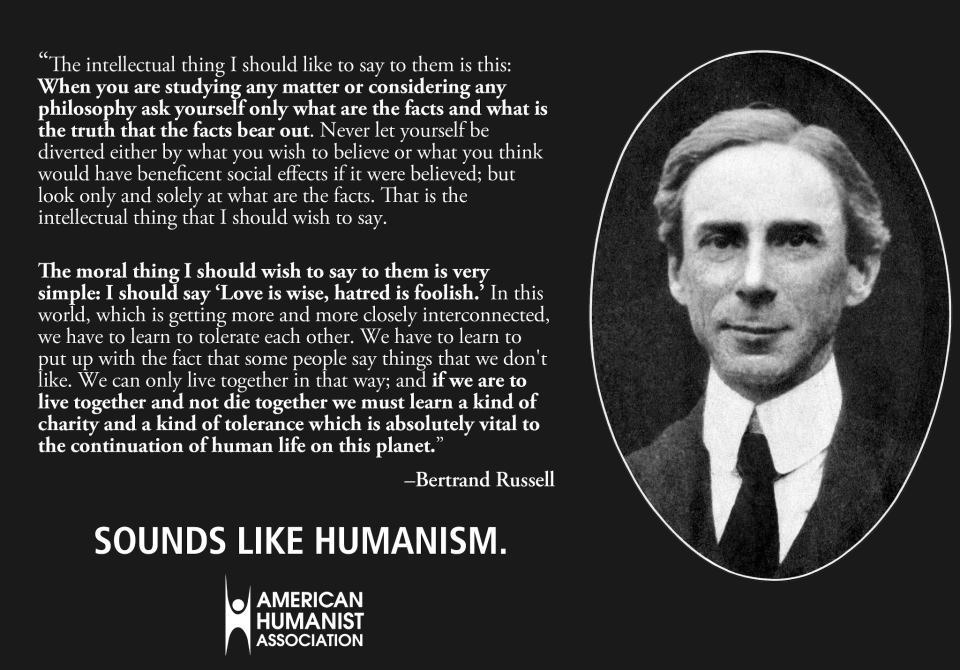 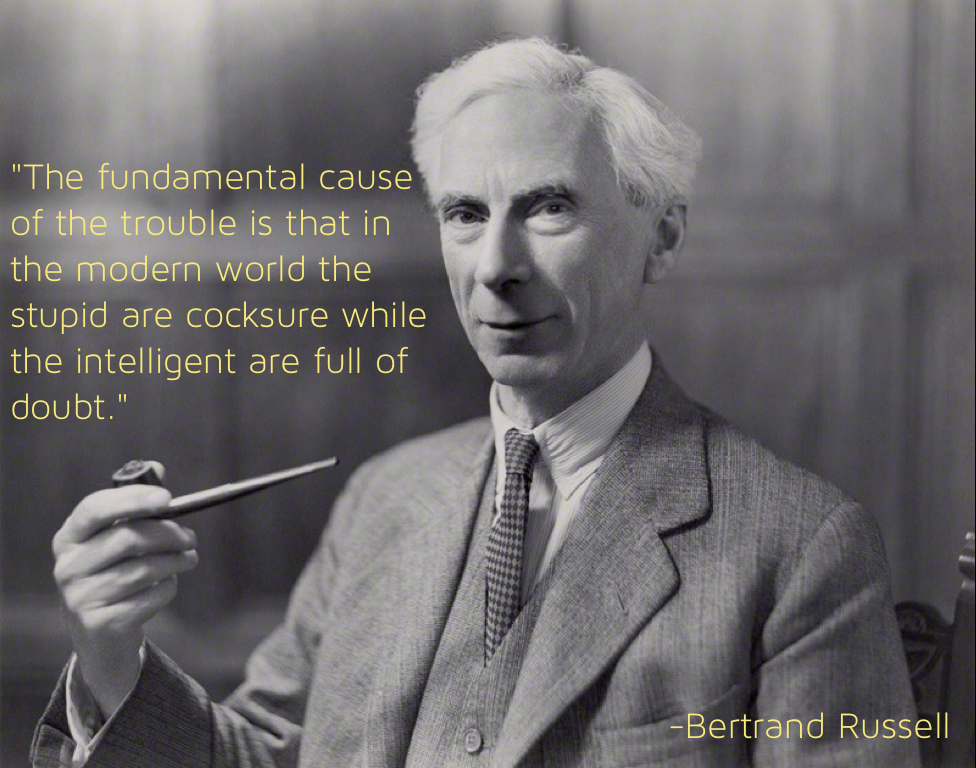 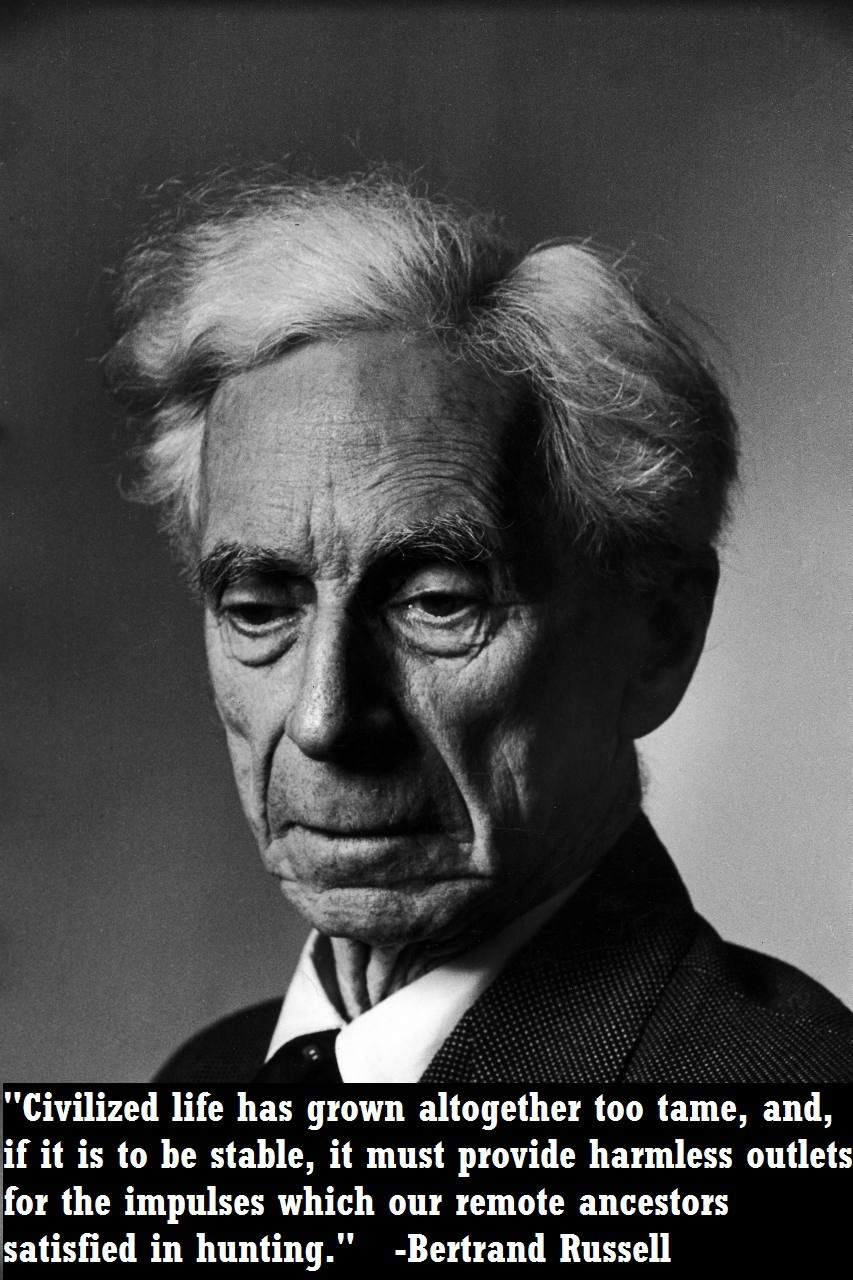 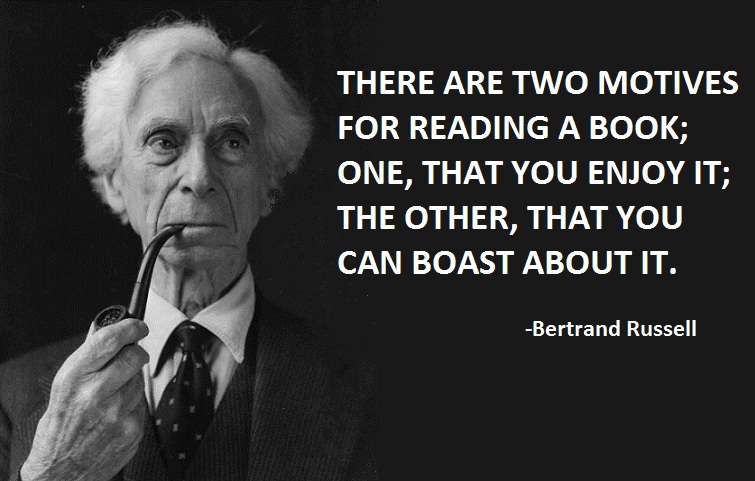 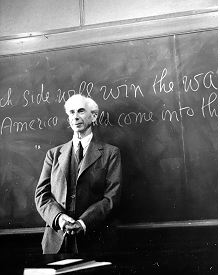 Dogmatism and skepticism are both, in a sense, absolute philosophies; one is certain of knowing, the other of not knowing. What philosophy should dissipate is certainty, whether of knowledge or ignorance.

Religion is something left over from the infancy of our intelligence, it will fade away as we adopt reason and science as our guidelines.

The secret to happiness is to face the fact that the world is horrible.

We are faced with the paradoxical fact that education has become one of the chief obstacles to intelligence and freedom of thought.

The megalomaniac differs from the narcissist by the fact that he wishes to be powerful rather than charming, and seeks to be feared rather than loved. To this type belong many lunatics and most of the great men of history.

It is preoccupation with possessions, more than anything else, that prevents us from living freely and nobly.

Life is nothing but a competition to be the criminal rather than the victim.

Mathematics may be defined as the subject in which we never know what we are talking about, nor whether what we are saying is true.

Collective fear stimulates herd instinct, and tends to produce ferocity toward those who are not regarded as members of the herd.

Contempt for happiness is usually contempt for other people's happiness, and is an elegant disguise for hatred of the human race.

A life without adventure is likely to be unsatisfying, but a life in which adventure is allowed to take whatever form it will is sure to be short.

So far as I can remember, there is not one word in the Gospels in praise of intelligence.

A hallucination is a fact, not an error; what is erroneous is a judgment based upon it.

Marriage is for women the commonest mode of livelihood, and the total amount of undesired sex endured by women is probably greater in marriage than in prostitution.

In all affairs it's a healthy thing now and then to hang a question mark on the things you have long taken for granted.

Most people would sooner die than think; in fact, they do so.

Do not fear to be eccentric in opinion, for every opinion now accepted was once eccentric.

A sense of duty is useful in work but offensive in personal relations. People wish to be liked, not to be endured with patient resignation.

It has been said that man is a rational animal. All my life I have been searching for evidence which could support this.

Of all forms of caution, caution in love is perhaps the most fatal to true happiness.

Ethics is in origin the art of recommending to others the sacrifices required for cooperation with oneself.

Much more quotes by Bertrand Russell below the page.

No one gossips about other people's secret virtues.

The demand for certainty is one which is natural to man, but is nevertheless an intellectual vice.

The infliction of cruelty with a good conscience is a delight to moralists. That is why they invented Hell.

Why is propaganda so much more successful when it stirs up hatred than when it tries to stir up friendly feeling?

Men who are unhappy, like men who sleep badly, are always proud of the fact.

Neither a man nor a crowd nor a nation can be trusted to act humanely or to think sanely under the influence of a great fear.

The only thing that will redeem mankind is cooperation.

If all our happiness is bound up entirely in our personal circumstances it is difficult not to demand of life more than it has to give.

Italy, and the spring and first love all together should suffice to make the gloomiest person happy.

The place of the father in the modern suburban family is a very small one, particularly if he plays golf.

The secret of happiness is this: let your interests be as wide as possible, and let your reactions to the things and persons that interest you be as far as possible friendly rather than hostile.

Many people would sooner die than think; in fact, they do so.

Freedom in general may be defined as the absence of obstacles to the realization of desires.

None but a coward dares to boast that he has never known fear.

I remain convinced that obstinate addiction to ordinary language in our private thoughts is one of the main obstacles to progress in philosophy.

All movements go too far.

Freedom of opinion can only exist when the government thinks itself secure.

Mathematics takes us into the region of absolute necessity, to which not only the actual word, but every possible word, must conform.

Much that passes as idealism is disguised hatred or disguised love of power.

Patriotism is the willingness to kill and be killed for trivial reasons.

The degree of one's emotions varies inversely with one's knowledge of the facts.

There is something feeble and a little contemptible about a man who cannot face the perils of life without the help of comfortable myths.

To acquire immunity to eloquence is of the utmost importance to the citizens of a democracy.

The fundamental defect of fathers, in our competitive society, is that they want their children to be a credit to them.

It seems to be the fate of idealists to obtain what they have struggled for in a form which destroys their ideals.

Order, unity, and continuity are human inventions, just as truly as catalogues and encyclopedias.

The coward wretch whose hand and heart Can bear to torture aught below, Is ever first to quail and start From the slightest pain or equal foe.

I say quite deliberately that the Christian religion, as organized in its Churches, has been and still is the principal enemy of moral progress in the world.

Both in thought and in feeling, even though time be real, to realise the unimportance of time is the gate of wisdom.

Freedom comes only to those who no longer ask of life that it shall yield them any of those personal goods that are subject to the mutations of time.

Obscenity is whatever happens to shock some elderly and ignorant magistrate.

The most savage controversies are about matters as to which there is no good evidence either way.

If there were in the world today any large number of people who desired their own happiness more than they desired the unhappiness of others, we could have a paradise in a few years.

Indignation is a submission of our thoughts, but not of our desires.

Man needs, for his happiness, not only the enjoyment of this or that, but hope and enterprise and change.

Reason is a harmonising, controlling force rather than a creative one.

The universe may have a purpose, but nothing we know suggests that, if so, this purpose has any similarity to ours.

To understand a name you must be acquainted with the particular of which it is a name.

I've made an odd discovery. Every time I talk to a savant I feel quite sure that happiness is no longer a possibility. Yet when I talk with my gardener, I'm convinced of the opposite.

A process which led from the amoeba to man appeared to the philosophers to be obviously a progress though whether the amoeba would agree with this opinion is not known.

The true spirit of delight, the exaltation, the sense of being more than Man, which is the touchstone of the highest excellence, is to be found in mathematics as surely as poetry.

I like mathematics because it is not human and has nothing particular to do with this planet or with the whole accidental universe - because, like Spinoza's God, it won't love us in return.

Those who forget good and evil and seek only to know the facts are more likely to achieve good than those who view the world through the distorting medium of their own desires.

Religions that teach brotherly love have been used as an excuse for persecution, and our profoundest scientific insight is made into a means of mass destruction.

Thought is subversive and revolutionary, destructive and terrible, Thought is merciless to privilege, established institutions, and comfortable habit. Thought is great and swift and free.

It is possible that mankind is on the threshold of a golden age; but, if so, it will be necessary first to slay the dragon that guards the door, and this dragon is religion.

There is no need to worry about mere size. We do not necessarily respect a fat man more than a thin man. Sir Isaac Newton was very much smaller than a hippopotamus, but we do not on that account value him less.

I think we ought always to entertain our opinions with some measure of doubt. I shouldn't wish people dogmatically to believe any philosophy, not even mine.

Aristotle maintained that women have fewer teeth than men; although he was twice married, it never occurred to him to verify this statement by examining his wives' mouths.

To teach how to live without certainty and yet without being paralysed by hesitation is perhaps the chief thing that philosophy, in our age, can do for those who study it.

A truer image of the world, I think, is obtained by picturing things as entering into the stream of time from an eternal world outside, than from a view which regards time as the devouring tyrant of all that is.

Against my will, in the course of my travels, the belief that everything worth knowing was known at Cambridge gradually wore off. In this respect my travels were very useful to me.

Tags: Against, Off, Respect

Every philosophical problem, when it is subjected to the necessary analysis and justification, is found either to be not really philosophical at all, or else to be, in the sense in which we are using the word, logical.

Right discipline consists, not in external compulsion, but in the habits of mind which lead spontaneously to desirable rather than undesirable activities.

Aristotle could have avoided the mistake of thinking that women have fewer teeth than men, by the simple device of asking Mrs. Aristotle to keep her mouth open while he counted.

I do not pretend to start with precise questions. I do not think you can start with anything precise. You have to achieve such precision as you can, as you go along.

Next to enjoying ourselves, the next greatest pleasure consists in preventing others from enjoying themselves, or, more generally, in the acquisition of power.