See the gallery for quotes by Rupert Grint. You can to use those 8 images of quotes as a desktop wallpapers. 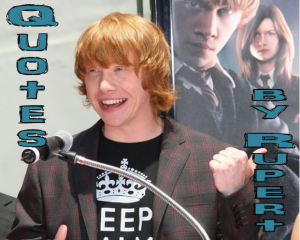 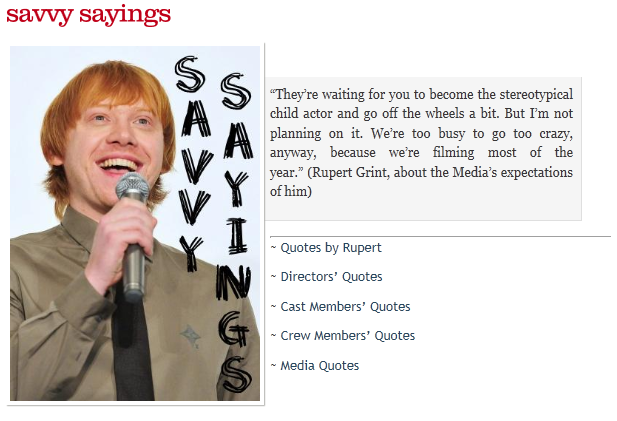 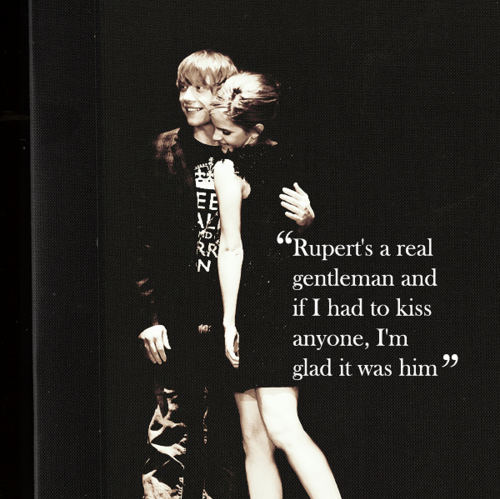 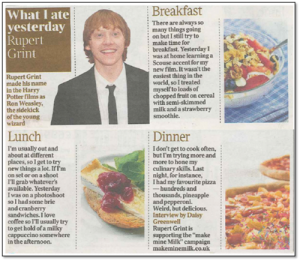 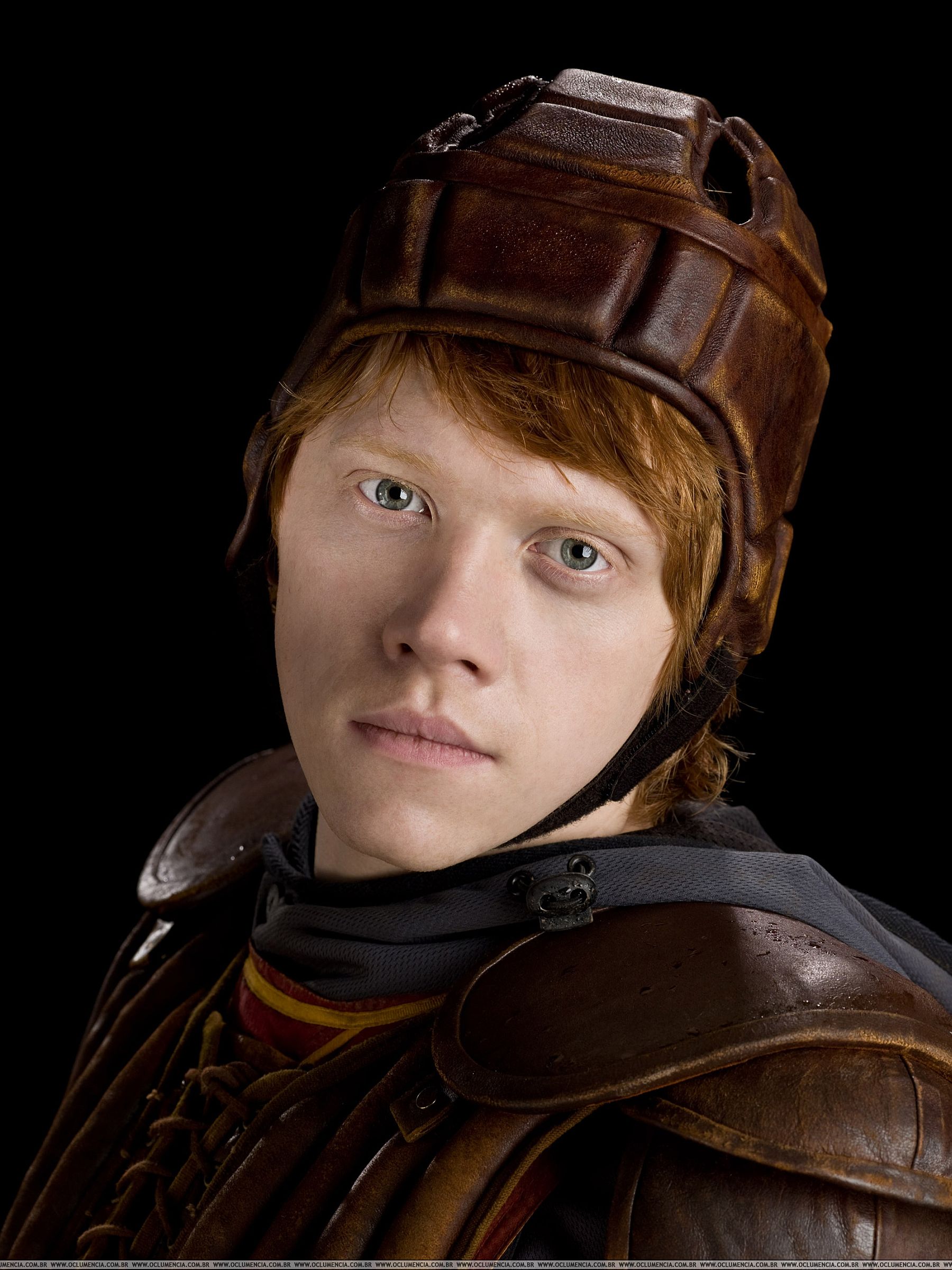 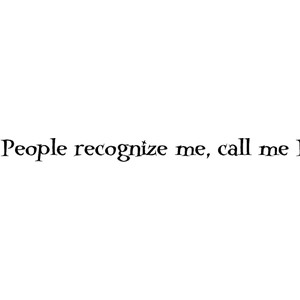 One in the third film, I'm looking forward to meeting one of the Dementors.

People recognize me, call me Ron, and ask me questions. It's really cool and weird as well.

We had a dialogue coach. She helped us with our T's.

We had a script reading, and that's where we met J.K. Rowling, which was really exciting.

We just started filming, and after every scene was shot, we had a rehearsal for the next one.

Tags: After, Next, Started

Yeah, my parents help me keep my feet on the ground.

I do, kind of, spend a lot. And just on stupid things. Because I don't really know what to do. What are you supposed to do? Um. It just seems like way too much. We don't deserve it, at all, for what we do.

I've never fancied that footballer lifestyle. I suppose I could live that kind of flash life. People stereotype child actors and kind of expect you to go off the rails a bit, be a bit crazy, but that's not really happened yet. I've got a big family so that helps, and they live really close to the studios so it's just so much easier.

In terms of filming, yes, it really does feel over now. There's a real sense of freedom now. It's a good time to finish, I think. As much as I'm going to miss it I'm ready to move on and do different things.

It's not that I find it hard to meet girls - they do come up and chat me up from time to time. Sometimes I'm interested, I tend not to go for the prettier ones. I prefer the quirkier types.

Leave home? It's quite a scary thought. I'm not the most independent person and that's the result. When you're always surrounded by people it becomes quite normal.

Ron was always my favorite character, because I feel like I relate to him, like we've both got red hair, we both like sweets, we've both got lots of brothers and sisters.

They were just kind of simultaneous - the film ending and the sets being destroyed. I was struck the first time I saw the Great Hall become a big pile of burning rubble and getting scattered around. It's really quite shocking for the fans.

After being in Harry Potter, I believe a bit more in magic than I did before.

The characters in the book grow up with us. My voice has broken as well.

Being famous is wicked. But it's better to be normal.

I get recognised sometimes, and that's really cool. I've tried certain disguises, but that doesn't work.

I want Ron to stand up to Malfoy and punish him.

I was always a big fan of the books and over the years I've become quite attached to Ron and we've meshed into the same person, really.

Well, before I knew there was going to be a film. I was the biggest Harry Potter fan. I read all the books.

It's always at the back of my mind that acting might come to an end for me when Harry Potter finishes. I don't know if I'm good enough to have a long career. I've got a bit of an inferiority complex about my acting. My self-esteem is quite low in that sense.

I've just started school again, and it was a bit strange to start off with; it took me three or four days to get used to it. My friends have been great, they've been treating me normally.

I've known Emma Watson since she was 9, we've watched each other grow up, formed this sort of brother/sister bond, and suddenly I'm leaning in to kiss her. Well, it felt completely wrong... but, you know, you try to sink into the character and divorce yourself from it. We ended up laughing hysterically afterwards.

So yes, I do want to try and keep things going if I can. I have a few things brewing... And if it doesn't happen, I did buy an ice cream van a while ago. So I always have that to fall back on.

Much more quotes by Rupert Grint below the page.

But I like all the books. You've got to read them all to get the complete Harry Potter experience.

Don't have a favorite subject, I think I want to carry on doing this because I really enjoy it.

Every time I come off-set, I am just like a normal kid again.

For me the stunts are so cool, they're one of my favourite things when we're doing the film.

I always wanted to go into acting.

I found out that you could audition by sending a picture of yourself and some information to Newsround.

I like all Jim Carrey films. They're really funny.

I was really nervous. Even when I left the audition I was nervous.

I went out with people, but never anything too serious. It wasn't that easy. Now it's something I'm really looking forward to.

I'd like to have the flying car, I think that'd be really cool.

I've never been seriously involved with anyone. I've certainly never been in love. I've always preferred to keep things casual.