See the gallery for quotes by Joseph Rotblat. You can to use those 7 images of quotes as a desktop wallpapers. 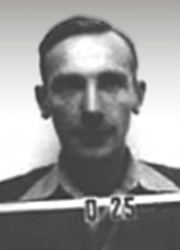 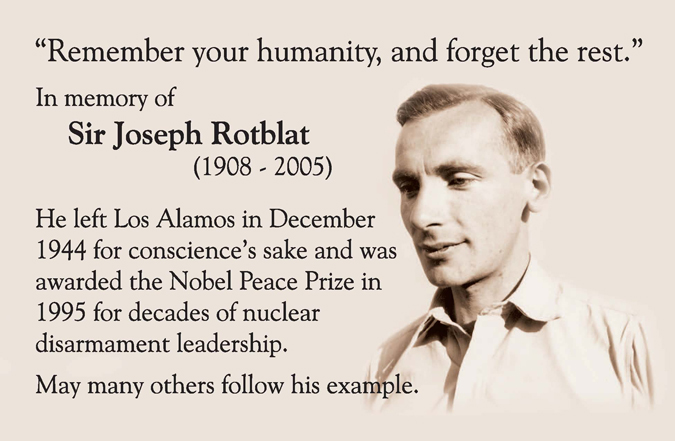 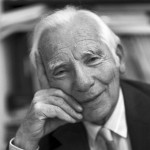 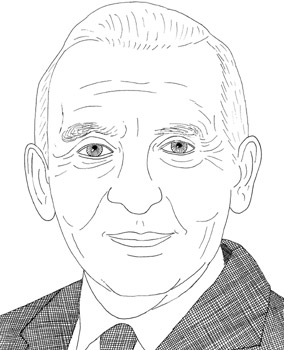 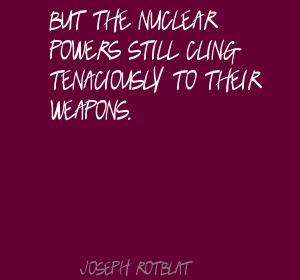 So I ask the nuclear powers to abandon the out-of-date thinking of the Cold War period and take a fresh look. Above all, I appeal to them to bear in mind the long-term threat that nuclear weapons pose to humankind and to begin action towards their elimination.

The chief task was to stop the arms race before it brought utter disaster. However, after the collapse of communism and the disintegration of the Soviet Union, any rationale for having nuclear weapons disappeared.

The decision to use the atom bomb on Japanese cities, and the consequent buildup of enormous nuclear arsenals, was made by governments, on the basis of political and military perceptions.

The most terrifying moment in my life was October 1962, during the Cuban Missile Crisis. I did not know all the facts - we have learned only recently how close we were to war - but I knew enough to make me tremble.

To sum up, there is no evidence that a world without nuclear weapons would be a dangerous world. On the contrary, it would be a safer world, as I will show later.

We are told that the possession of nuclear weapons - in some cases even the testing of these weapons - is essential for national security. But this argument can be made by other countries as well.

When the START 2 treaty has been implemented - and remember it has not yet been ratified - we will be left with some 15,000 nuclear warheads, active and in reserve. Fifteen thousand weapons with an average yield of 20 Hiroshima bombs.

From my earliest days I had a passion for science.

I appeal to my fellow scientists to remember their responsibility to humanity.

I did not imagine that the second half of my life would be spent on efforts to avert a mortal danger to humanity created by science.

I saw science as being in harmony with humanity.

My third appeal is to my fellow citizens in all countries: Help us to establish lasting peace in the world.

The Cold War is over but Cold War thinking survives.

The time has come to formulate guidelines for the ethical conduct of scientist, perhaps in the form of a voluntary Hippocratic Oath.

This is the reality of nuclear weapons: they may trigger a world war; a war which, unlike previous ones, destroys all of civilization.

This means that the only function of nuclear weapons, while they exist, is to deter a nuclear attack.

As for the assertion that nuclear weapons prevent wars, how many more wars are needed to refute this arguments? Tens of millions have died in the many wars that have taken place since 1945.

At a time when science plays such a powerful role in the life of society, when the destiny of the whole of mankind may hinge on the results of scientific research, it is incumbent on all scientists to be fully conscious of that role, and conduct themselves accordingly.

But scientists on both sides of the iron curtain played a very significant role in maintaining the momentum of the nuclear arms race throughout the four decades of the Cold War.

Much more quotes by Joseph Rotblat below the page.

But the first the general public learned about the discovery was the news of the destruction of Hiroshima by the atom bomb. A splendid achievement of science and technology had turned malign. Science became identified with death and destruction.

I have to bring to your notice a terrifying reality: with the development of nuclear weapons Man has acquired, for the first time in history, the technical means to destroy the whole of civilization in a single act.

If the militarily most powerful - and least threatened - states need nuclear weapons for their security, how can one deny such security to countries that are truly insecure? The present nuclear policy is a recipe for proliferation. It is a policy for disaster.

Indeed, the very first resolution of the General Assembly of the United Nations - adopted unanimously - called for the elimination of nuclear weapons.

Indeed, the whole human species is endangered, by nuclear weapons or by other means of wholesale destruction which further advances in science are likely to produce.

Let me remind you that nuclear disarmament is not just an ardent desire of the people, as expressed in many resolutions of the United Nations. It is a legal commitment by the five official nuclear states, entered into when they signed the Non-Proliferation Treaty.

Long before the terrifying potential of the arms race was recognized, there was a widespread instinctive abhorrence of nuclear weapons, and a strong desire to get rid of them.

Several studies, and a number of public statements by senior military and political personalities, testify that - except for disputes between the present nuclear states - all military conflicts, as well as threats to peace, can be dealt with using conventional weapons.

Since the end of the Cold War two main nuclear powers have begun to make big reductions in their nuclear arsenals. Each of them is dismantling about 2,000 nuclear warheads a year.

A lot of people who own a business aren't entrepreneurial at all.

Eighty to 90 percent of success in a company has nothing to do with business at all - it's all personal.

Most people end up owning a business by accident. Therefore, they don't usually have a thought process and a strategic plan in place.

Social media can be a powerful tool to listen to, engage with and gain access to customers that you would otherwise not be able to connect with.

I have been working in male-dominated industries most of my life. When I started my career in investment banking, I was one of two women in my analyst class.

Many businesses fail because the owner wasn't willing to invest and wasn't educated on the difference between spending money frivolously and investing money into the business for growth, and the risks and rewards of that cash infusion.

Men, if you are in a position of power or authority, please respectfully continue to mentor and work with talented individuals and those with promise, regardless if they are men or women.

Over the years, I have created close friendships with many successful men, many of whom I have made a lot of money for through deals that I brought to them or business counsel that I have provided.

When men hold the greater majority of all professional positions of power, it is impossible for a woman to advance her career without the support of men.