See the gallery for quotes by George Wald. You can to use those 7 images of quotes as a desktop wallpapers. 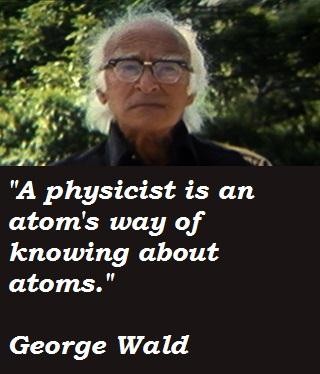 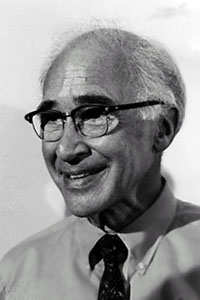 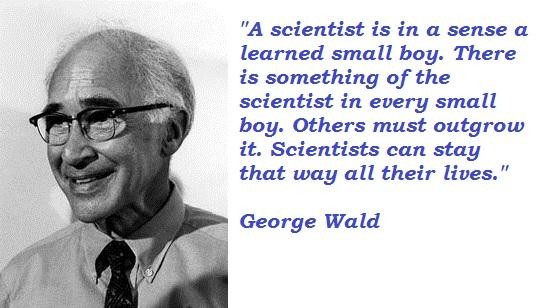 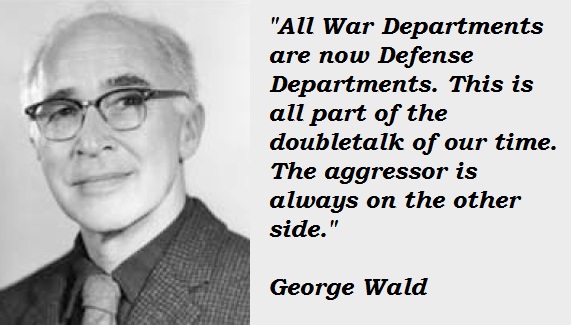 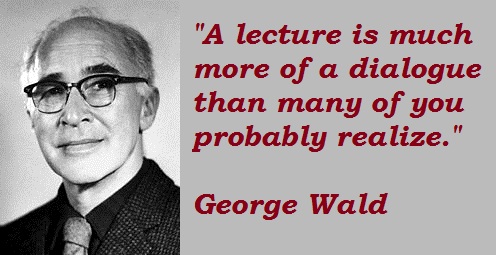 To know reality is to accept it, and eventually to love it.

We are the products of editing, rather than of authorship.

As far as I know, the most conservative estimates of the number of Americans who would be killed in a major nuclear attack, with everything working as well as can be hoped and all foreseeable precautions taken, run to about fifty million.

I tell my students to try to know molecules, so well that when they have some question involving molecules, they can ask themselves, What would I do if I were that molecule?

It would be a poor thing to be an atom in a universe without physicists, and physicists are made of atoms. A physicist is an atom's way of knowing about atoms.

It's not good enough to give it tender, loving care, to supply it with breakfast foods, to buy it expensive educations. Those things don't mean anything unless this generation has a future. And we're not sure that it does.

Science goes from question to question; big questions, and little, tentative answers. The questions as they age grow ever broader, the answers are seen to be more limited.

The Nobel Prize is an honor unique in the world in having found its way into the hearts and minds of simple people everywhere. It casts a light of peace and reason upon us all; and for that I am especially grateful.

There is nothing worth having that can he obtained by nuclear war - nothing material or ideological - no tradition that it can defend. It is utterly self-defeating.

We have fallen in love with the body. That's that thing that looks back at us from the mirror. That's the repository of that lovely identity that you keep chasing all your life.

We've committed many war crimes in Vietnam - but I'll tell you something interesting about that. We were committing war crimes in World War II, before the Nuremberg trials were held and the principle of war crimes was stated.

You see, every creature alive on the earth today represents an unbroken line of life that stretches back to the first primitive organism to appear on this planet; and that is about three billion years.

A lecture is much more of a dialogue than many of you probably realize.

Dropping those atomic bombs on Hiroshima and Nagasaki was a war crime.

A scientist is in a sense a learned small boy. There is something of the scientist in every small boy. Others must outgrow it. Scientists can stay that way all their lives.

I tell my students to try early in life to find an unattainable objective.

The thought that we're in competition with Russians or with Chinese is all a mistake, and trivial. We are one species, with a world to win.

A peacetime draft is the most un-American thing I know.

A physicist is an atom's way of knowing about atoms.

A scientist lives with all reality. There is nothing better.

A scientist should be the happiest of men.

Much more quotes by George Wald below the page.

All War Departments are now Defense Departments. This is all part of the doubletalk of our time. The aggressor is always on the other side.

And, you see, we are living in a world in which all wars are wars of defense.

As you lecture, you keep watching the faces, and information keeps coming back to you all the time.

I am growing old, and my future, so to speak, is already behind me.

I have lived much of my life among molecules. They are good company.

In fact, death seems to have been a rather late invention in evolution. One can go a long way in evolution before encountering an authentic corpse.

Our business is with life, not death.

Since we have had a history, men have pursued an ideal of immortality.

The concept of war crimes is an American invention.

The only point of government is to safeguard and foster life.

The only use for an atomic bomb is to keep somebody else from using one.

Tags: Else, Keep, Somebody

The trouble with most of the things that people want is that they get them.

There's life all over this universe, but the only life in the solar system is on earth, and in the whole universe we are the only men.