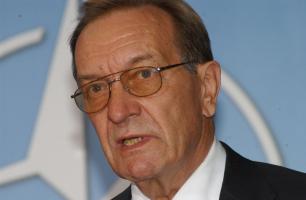 See the gallery for quotes by Harri Holkeri. You can to use those 7 images of quotes as a desktop wallpapers. 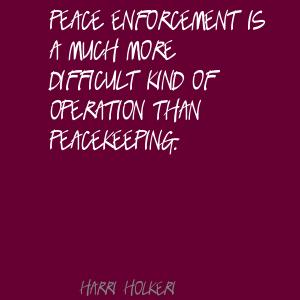 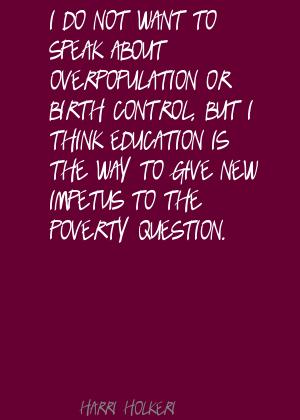 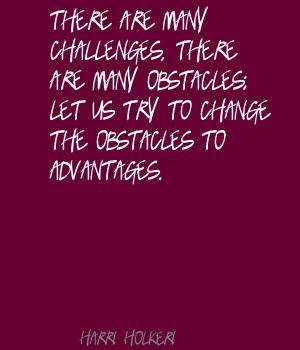 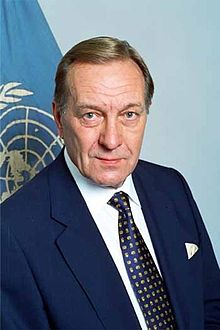 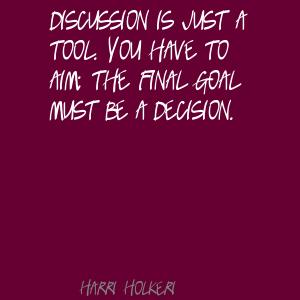 That is where consensus-building begins-with the idea that you have your own truth, but that the negotiator on the other side of the table has his own truth as well.

The Baltic Sea is becoming more and more polluted. Not everybody living near the shore of the Baltic Sea is protecting it. It is the water of life for countries like Finland and Sweden.

There are big issues, like the reform of the Security Council. These kinds of questions are something the President of the General Assembly must keep his eye on.

When my first child was born in 1962, I wrote a letter to my grandfather telling him how happy I was but how concerned; concerned because there were so many visions which were not very good.

When the problems in Northern Ireland started, it was not a question of Protestantism or Catholicism, because the Catholic church was the only church at that time-it was a nationalist conflict.

My opinion on who's wrong or who's right has nothing to do with the fact that we have to bring together people who are against each other, to transform antagonism into cooperation.

Discussion is just a tool. You have to aim; the final goal must be a decision.

I do not want to speak about overpopulation or birth control, but I think education is the way to give new impetus to the poverty question.

I really do hope that the Millennium Summit gives new impetus to the work of the United Nations.

I think I can regard myself as a political decision-maker.

If we go back in the history of different nations, violence and the use of force are part of their heritage. These are the traditions of mankind.

If you come to a negotiation table saying you have the final truth, that you know nothing but the truth and that is final, you will get nothing.

In every European nation, there have been problems in history when the society was too divided.

In Finland we have equal political rights for women and men. We do not regard ourselves according to sex.

Men and women have roles - their roles are different, but their rights are equal.

Peace enforcement is a much more difficult kind of operation than peacekeeping.

We Finns represent a very transparent and open-minded way of reaching political decisions.

We have the tools, but we have to learn how to use them. That is my political philosophy.

What we can do as individuals may not be very much on the global scale, but we have to start the change by living as we are teaching.

Without accepting the other person's thinking, you cannot further your own interest. You need the other's help to get results.

Without rebuilding the confidence between parties, you will never succeed.

You cannot make easy decisions unless you first commit yourself to hard solutions.

Much more quotes by Harri Holkeri below the page.

Finland had a civil war less than 100 years ago, just like in Ireland. If you look at the history of newly independent nations, civil war is almost every time present, even in the United States.

I recently reread an article of mine written in 1964, and I think it is still valid. There is not much difference. Many of the items on the agenda 37 years ago are still there.

I think we have grave problems. I am very much concerned about environmental questions, even though in Finnish society, we are not facing the most urgent problems.

If there is something I would like to do as President of the General Assembly, it is to place more emphasis on the issue of education, which enables a better life for women.

In Finland, we learned quite a lot from our own civil war. The wounds were visible when I was a boy, but my generation went into the Second World War and it united the Finnish nation, so I do not see any more wounds.

In international or national crises, there are always questions of lack of confidence. You have to change the minds of the people in order to get results.

The only people left in America who seem not to be artists are illustrators.

Futurism: This was a movement of intellectuals who wanted to replace tradition with the modern world of machinery, speed, violence, and public relations. It proves that we should be careful what intellectuals wish for, because we might get it.

In Modernism, reality used to validate media. In Postmodernism, the media validate reality. If you don't believe this, just think how many times you've described some real event as being 'just like a movie.'

If they were starting their careers today, Rockwell and Picasso would probably both be painting on black velvet.

In America, the only truly popular art form is the movies. Most people consider painting a hobby and literature, schoolwork.

Style is the most valuable asset of the modern artist. That's probably why so many styles are reported lost or stolen each year.

The truth is, we haven't really figured out yet how artists are going to thrive in modern mass societies. We're all experiments.

Fifty years ago, it was the dream of every bohemian artist to be seen getting out of a limousine wearing blue jeans and sneakers. Today, it's the dream of probably half the people in the country.

I've never understood why artists, who so often condescend to the cliches of their own culture, are so eager to embrace the cliches of cultures they know nothing about.

Many of the contradictions in Postmodern art come from the fact that we're trying to be artists in a democratic society. This is because in a democracy, the ideal is compromise. In art, it isn't.

Many people have observed that truth is stranger than fiction. This has led some intellectuals to conclude that it's stranger than non-fiction as well.

Postmodernists believe that truth is myth, and myth, truth. This equation has its roots in pop psychology. The same people also believe that emotions are a form of reality. There used to be another name for this state of mind. It used to be called psychosis.

All of the musicians when I was young used to always say you had to tell a story when you're a musician.

I started playing with a group of young people when I was 13. I turned professional when I was 15 and I played dance halls, this on bass guitar.

I want to be surprised by what people do, I don't want to work with people who need to be told what to do. I want people to show me what they've got.

The whole point in developing your own style is to find your own voice.

To me, at its best, that's what art should do, perform both the emotional and intellectual function.

You have to find a way to protect yourself in a certain way from people who are constantly demanding your time.

I think that what is important is that the music be honest and direct and that it is relevant to today. I think music needs to be of its time and speak to that time.

I think there is great interest amongst the younger people in this music. I think that there is a lot of them that are looking for interesting situations and music that is stimulating.

In fact, jazz has such a great feeling and great emotional content that it really doesn't require you to have technical understanding of it. I think you just have to allow your feelings to go with the music and you will find yourself carried along by it fairly quickly.

It was only when I started to dig my heels in that I started to realize that's what I needed to do - that nobody was going to open the door for me, that I had to make some space.