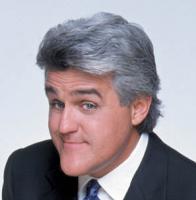 See the gallery for quotes by Jay Leno. You can to use those 8 images of quotes as a desktop wallpapers. 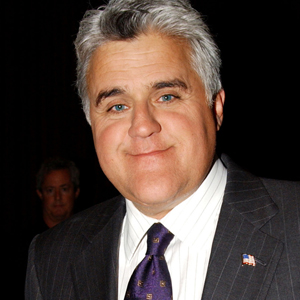 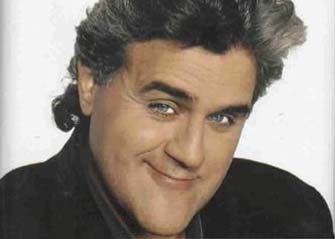 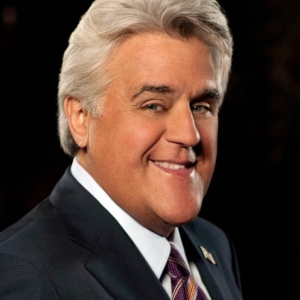 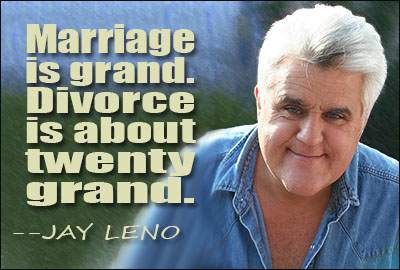 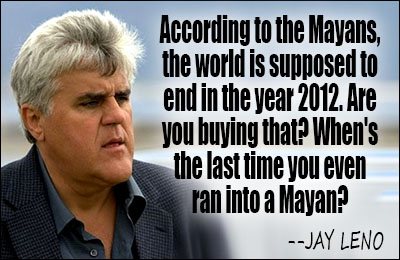 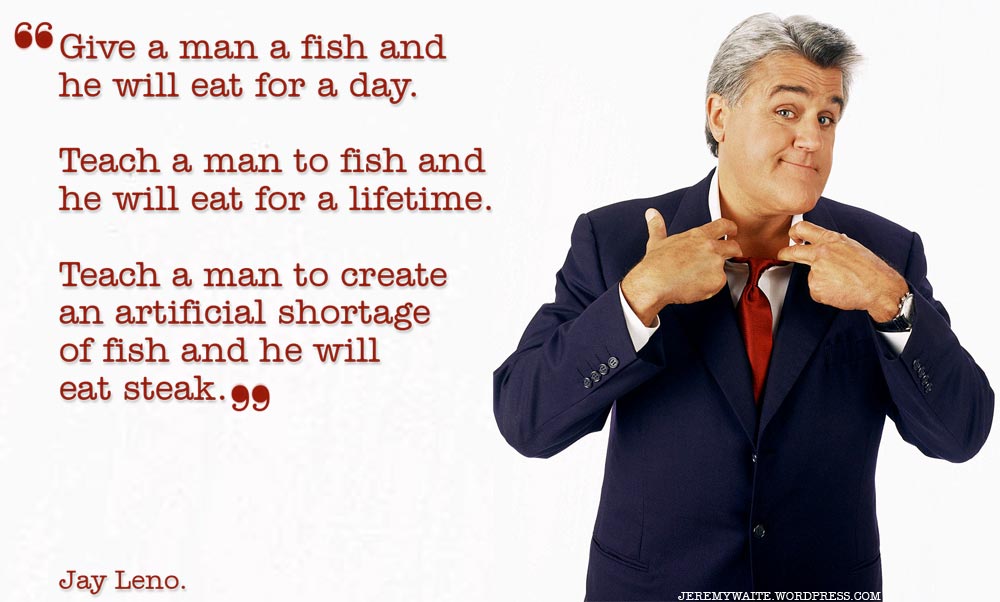 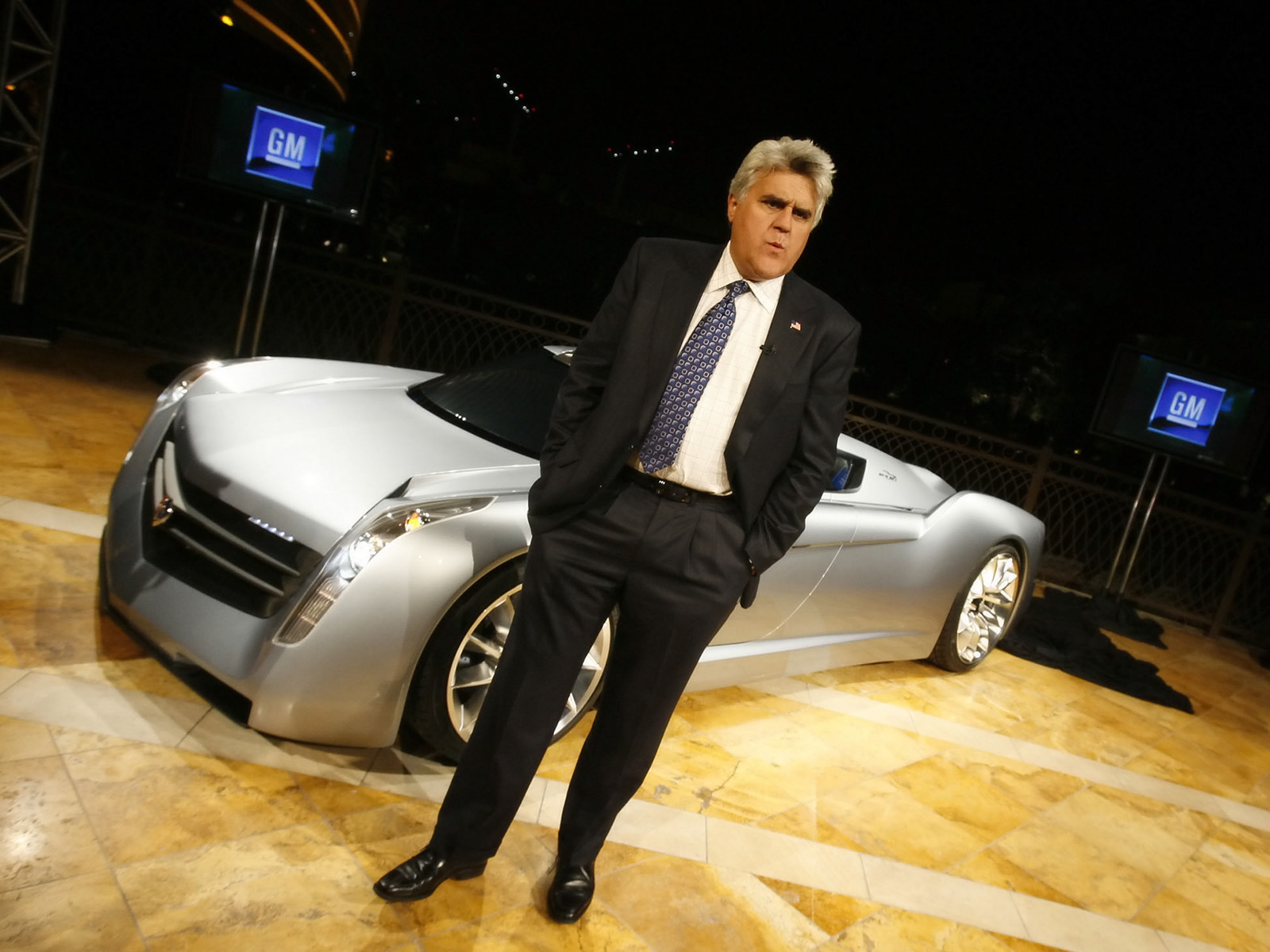 In America, we like everyone to know about the good work we're doing anonymously.

My stockbroker asked me something important today: paper or plastic?

People don't mind if you have a lot of money if they know you're working for it.

The best way to ruin a comedy is to throw a lot of money at it.

The Bush administration said today there is a lot of support for us to attack Iraq. Exxon, Mobil, Texaco, Chevron, they're all lining up.

The Pentagon still has not given a name to the Iraqi war. Somehow 'Operation Re-elect Bush' doesn't seem to be popular.

You aren't famous until my mother has heard of you.

Al Jazeera aired a new tape of Osama bin Laden. It was the usual stuff, he called Bush evil, the Great Satan, called him a war monger. Basically, the same thing you heard at last night's Democratic debate.

Magic Johnson, former basketball player, may run for mayor of L.A. in the next election. Remember the good 'ol days when only qualified people ran for office like actors and professional wrestlers.

The Washington Bullets are changing their name. They don't want their team to be associated with crime. From now on, they'll just be known as the Bullets.

According to New York publishers, Bill Clinton will get more money for his book than Hillary Clinton got for hers. Well, duh. At least his book has some sex in it.

Bush reiterated his stand to conservatives opposing his decision on stem cell research. He said today he believes life begins at conception and ends at execution.

More coming out about Saddam Hussein. We now know he takes Viagra and he has as many as six mistresses. No wonder Congress is reluctant to take action against this guy - he's one of their own.

Nineteen percent of doctors say that they'd be able to give their patients a lethal injection. But they also went on to say that the patient would have to be really, really behind on payments.

Today, one year after their divorce, Pamela and Tommy Lee announced they're getting back together. You know what that means? There's still hope for Ike and Tina Turner.

The Supreme Court has ruled that they cannot have a nativity scene in Washington, D.C. This wasn't for any religious reasons. They couldn't find three wise men and a virgin.

Today is Valentine's Day - or, as men like to call it, Extortion Day!

Don't forget Mother's Day. Or as they call it in Beverly Hills, Dad's Third Wife Day.

The reason there are two senators for each state is so that one can be the designated driver.

For the first time ever, overweight people outnumber average people in America. Doesn't that make overweight the average then? Last month you were fat, now you're average - hey, let's get a pizza!

Here's something to think about: How come you never see a headline like 'Psychic Wins Lottery'?

You can't stay mad at somebody who makes you laugh.

If God doesn't destroy Hollywood Boulevard, he owes Sodom and Gomorrah an apology.

Much more quotes by Jay Leno below the page.

Major league baseball has asked its players to stop tossing baseballs into the stands during games, because they say fans fight over them and they get hurt. In fact, the Florida Marlins said that's why they never hit any home runs. It's a safety issue.

Do you know what White House correspondents call actors who pose as reporters? Anchors.

I think high self-esteem is overrated. A little low self-esteem is actually quite good. Maybe you're not the best, so you should work a little harder.

You're not famous until my mother has heard of you.

The crime problem in New York is getting really serious. The other day the Statue of Liberty had both hands up.

If you don't want your dog to have bad breath, do what I do: Pour a little Lavoris in the toilet.

You cannot be mad at somebody who makes you laugh... it's as simple as that.

I didn't realize it was October until I saw the Chicago Cubs choking.

I was in the ROTC. Of course, ROTC stood for 'Running off to Canada.'

If God had wanted us to vote, he would have given us candidates.

If I have one advantage, it's that I will try to work harder than the next guy.