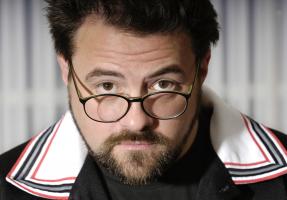 See the gallery for quotes by Kevin Smith. You can to use those 8 images of quotes as a desktop wallpapers. 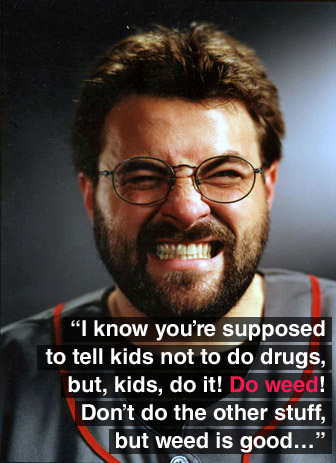 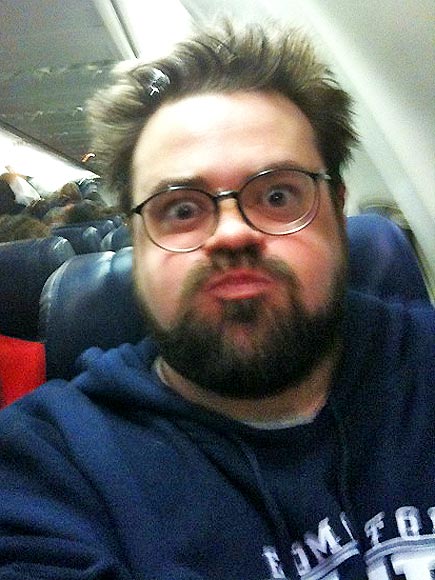 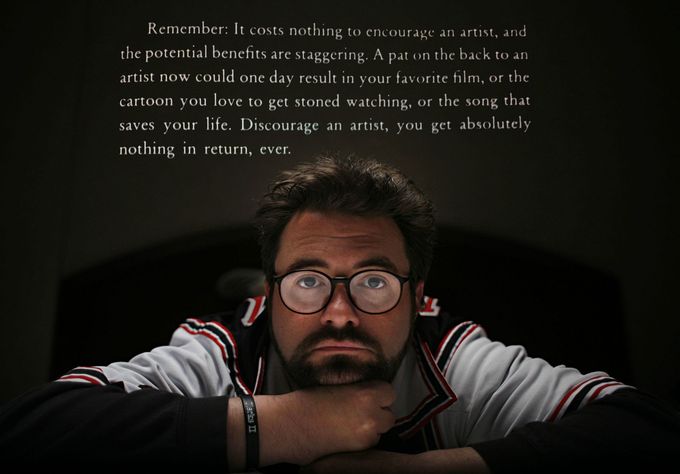 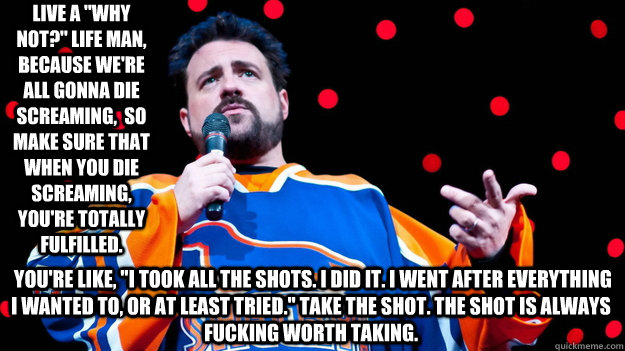 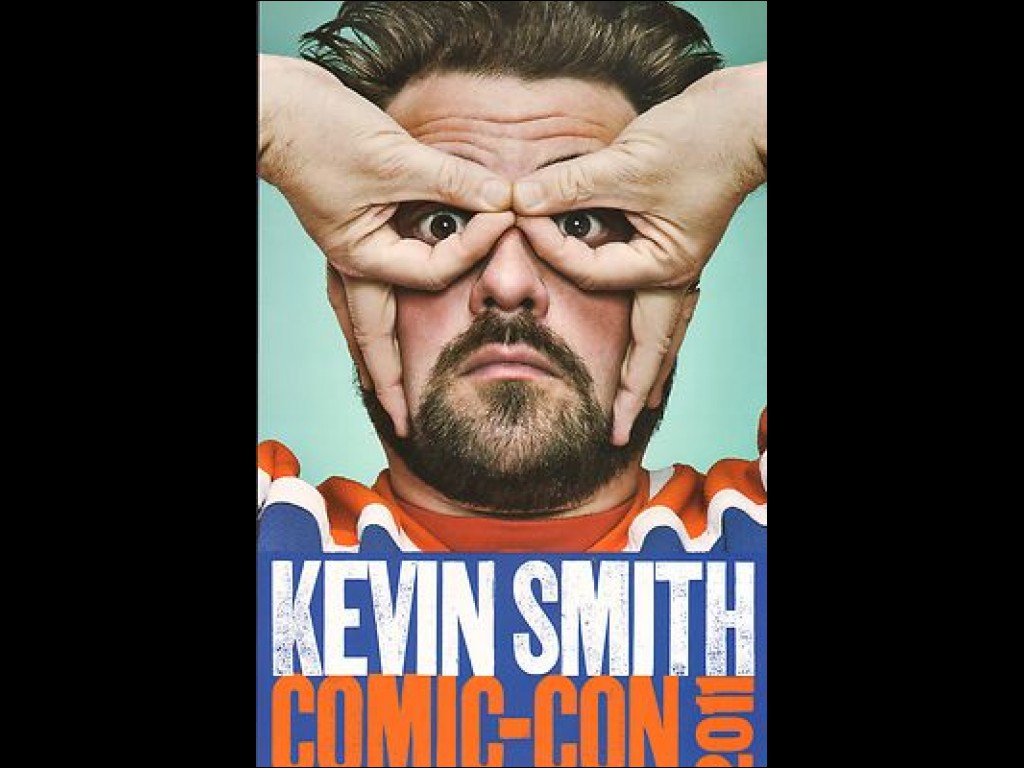 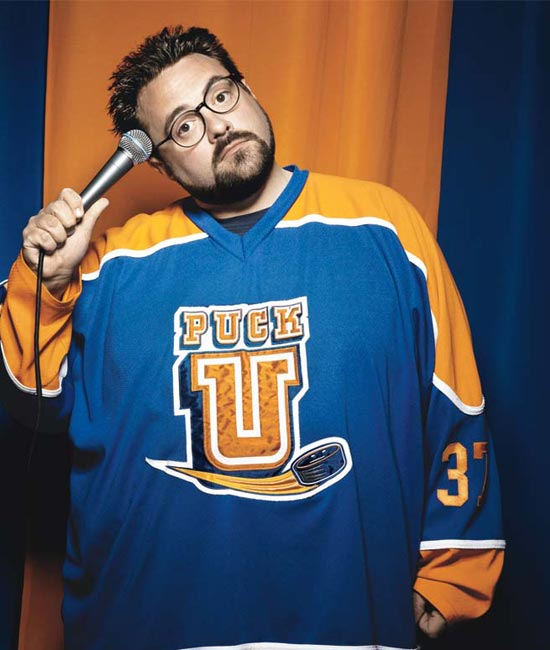 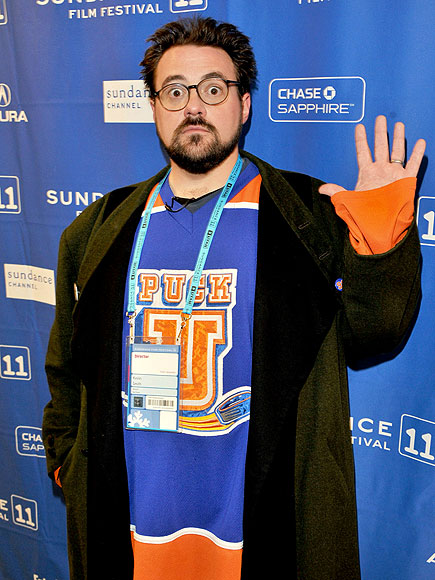 It's kind of debatable whether or not the advertisement model is effective. Like whether Nielsen works.

It's like a dream come true. When somebody is paying you to talk about yourself, you've won.

It's silly that anyone in this world tells you that there are only certain people that can marry you.

It's taken me 15 years to step behind a camera and make something everyone agrees looks like a movie.

Oh, I'm online all the time now. I'm not an outdoorsy type.

Other filmmakers make their movies and put them out and that's that. For me, for some odd reason, it goes deeper than that.

People like to set the bar high. I like to put the bar on the ground and barely step over it. I like to keep the expectations really low.

People wanted more advice. So I finally thought I could totally put this advice into a book.

So I know how I watch movies which is on my laptop, man. And that's how I suspect a lot of people do it.

The first few films I made didn't look good at all, and I wasn't trying to make them look good. People dig 'em because they like the content.

The older you get, the more you realize you cannot win on the Internet.

When you're a filmmaker you're part of a very expensive art form.

When you're an artist, all you're trying to do is self-express.

You know, comics and movies, even if you take a comic and turn it into a movie, we can't all be Joss Whedon.

There's something to be said for failing. It's not the failure you feel, it's the failure that people project when something disappoints. You're back to ground zero, where there's no expectations, and that's where I like to be.

And the podcasting - I swear to you - on its worst day, the podcasts are better than our best films. Because they're more imaginative, and there's no artifice, and it's far more real.

From now on, any flick I'm ever involved with, I conduct critics screenings thusly: 'You wanna see it early to review it? Fine: pay like you would if you saw it next week.'

I think the advent of the Internet gave us all a big boost, because by the time the Internet became mainstream and you could get it in your home, a lot of us were used to dealing in fan culture, writing to magazines or anything at the back of comic books.

I think: 'Wouldn't it be great to work with Bill Murray?' And then I'm like, 'You know what, just appreciate Bill Murray from afar, don't find out that maybe he's not the dude you want to work with.'

I've always kind of ripped from real life to some degree or at least how I'm feeling in the moment. In fact, maybe that's really it. In anything I've ever written, all the characters sound like me, which I don't think is a bad thing.

In anything I've ever written, all the characters sound like me, which I don't think is a bad thing. It makes sense. But I had always admired filmmakers who made movies that didn't sound like them at all.

It's kind of debatable whether or not the advertisement model is effective. Like whether Nielsen works. For years, Nielsen has been based on sampling. It's not like an electronic bullet that hits your house that tells the people at networks at all times what you're watching.

The only thing of value I have in this life is my ability to tell a story, whether in print, orating, writing it down or having people acting it out. That's why I'm always hoping society never collapses because the first ones to go will be entertainers.

Much more quotes by Kevin Smith below the page.

The writer crafts their ideal world. In my world, everyone has really long conversations or just picks apart pop culture to death and everyone talks in monologue.

You can have 10 bucks to 10 million bucks and if you got a crew, imagination and a lot of people willing to turn in some work next to nothing, you going to have a feature. But you can't get beyond how expensive marketing the movie is, it's so crushing.

Don't let anybody tell you different, man: The main goal in life careerwise should always be to try to get paid to simply be yourself.

I grew up in a pretty gay world - my brother's gay and he's been married to a man for 20 years, which is like 60 in straight-people years.

Long time no see. I only pray the caliber of your questions has improved.

I always wanted to see if I could sell a movie to the public without doing any marketing because my philosophy was like, 'Hey man, I'm reaching my audience everyday. I'm twittering with them. I'm in direct contact with them on the podcast.'

Everybody's got one killer story. It doesn't take talent to tell that story, it just takes experience.

Haven't two hundred years of failed missionary work overseas taught anybody anything? You can't convert people to anything - whether religion, or something as inane as our flicks.

And George Carlin was a guy that the more he aged the younger he seemed.

I just love movies, so suddenly, you're political about movies, and that's dark. It's just not fun when something you love becomes calculated.

I sympathize far more with heavier people than I ever will with thin. I'll never be thin. Let's be honest.

I'd see movies, comedies, and I loved 'Animal House', I loved all the John Hughes stuff, but I never saw me and my friends totally represented.

I know what it feels like to carry a lot of weight in a society that's very image-conscious. It's a thin person's world, and we try to navigate within it without being made fun of.

Storytelling is my currency. It's my only worth. The only thing of value I have in this life is my ability to tell a story, whether in print, orating, writing it down or having people acting it out.

All these people who say success changes people; well, no, it just magnifies what's there.

Any book is a self-help guide if you can take something from it.

Generally, I wake up, honestly it's creepy, but I wake up around 4:20.

I didn't get into film to win Academy Awards. I wanted to have a conversation with the audience.

I saw Richard Linklater's film 'Slacker' for my twenty-first birthday. That was the moment when it all seemed possible. This guy gave me hope.

I say what other people won't.

I've always kind of ripped from real life to some degree or at least how I'm feeling in the moment.

If there was no Internet, my career would have ended in 1995.

If you grow up fat, you have to try harder.

If you're lucky, you go from being a movie fan to a movie maker.

In Hollywood you just fail upwards.