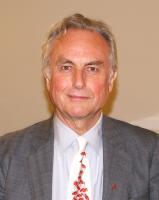 See the gallery for quotes by Richard Dawkins. You can to use those 8 images of quotes as a desktop wallpapers. 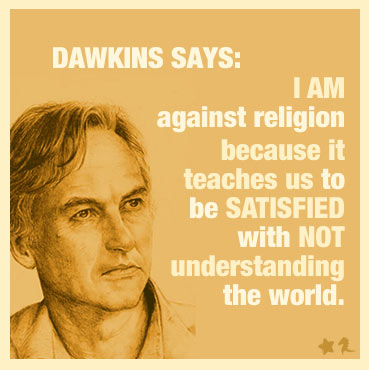 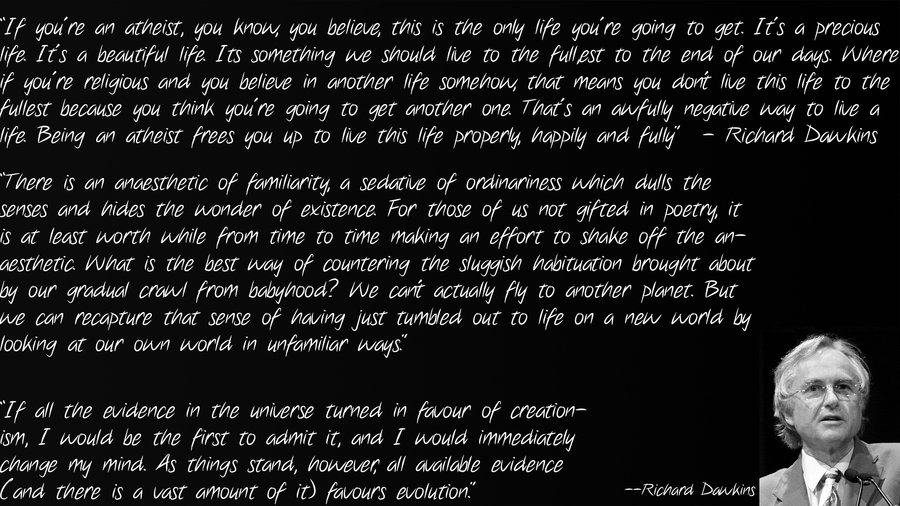 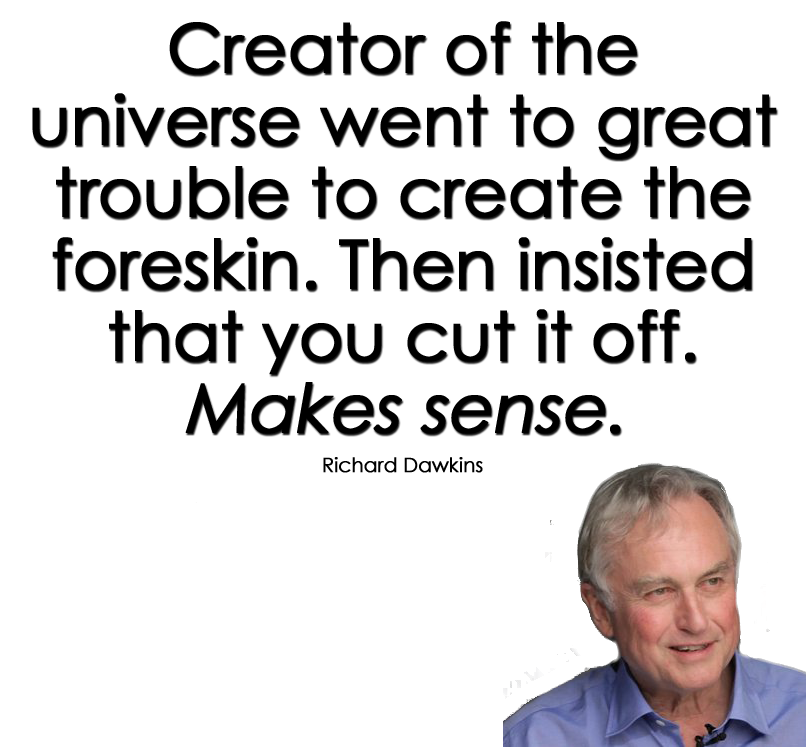 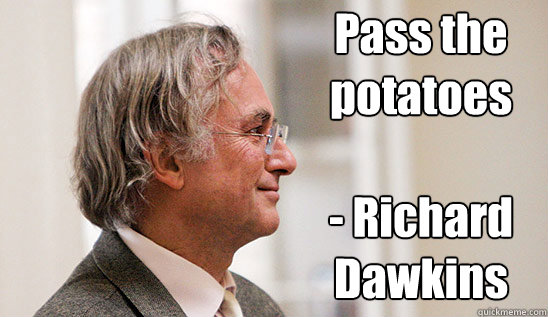 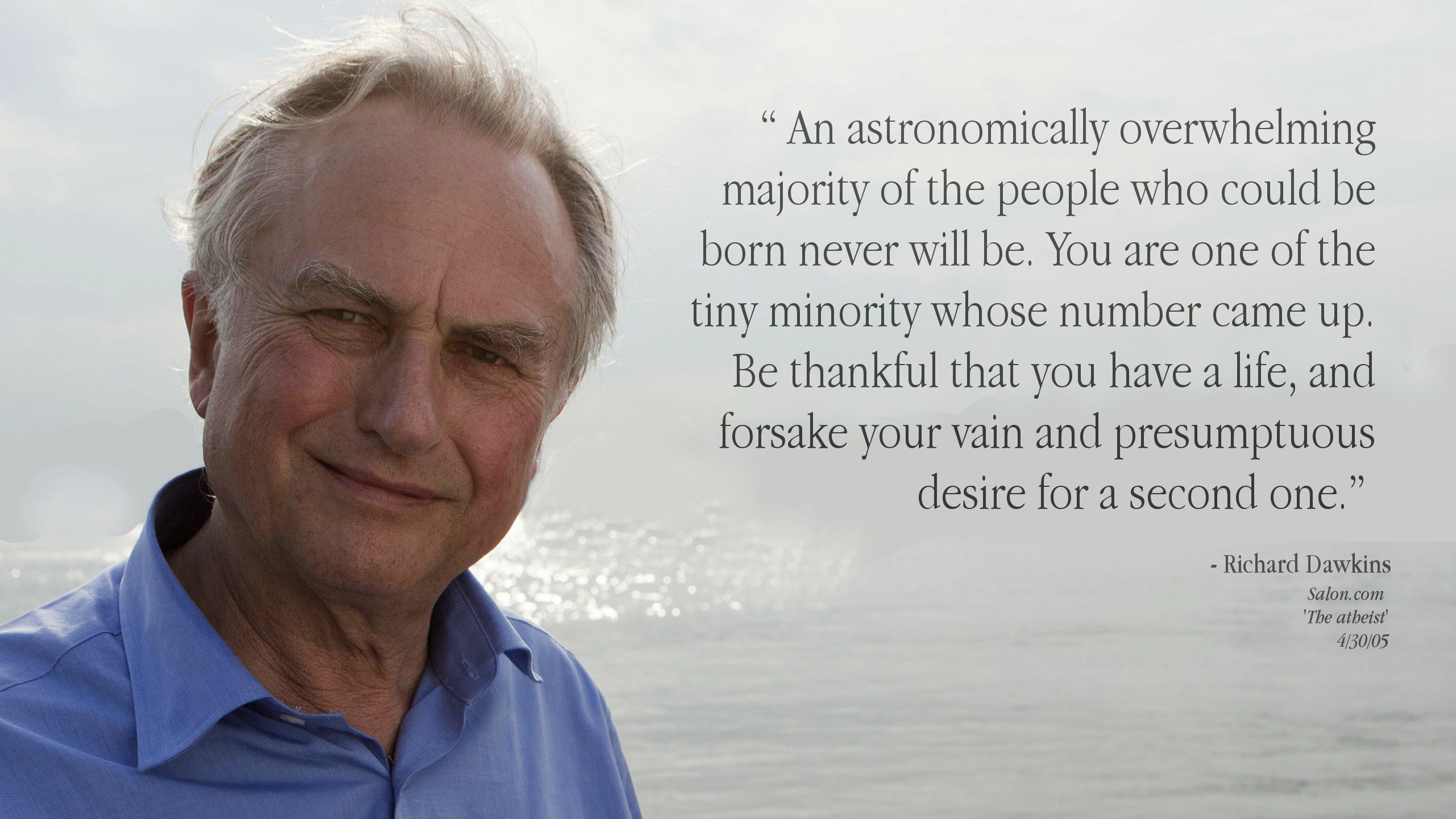 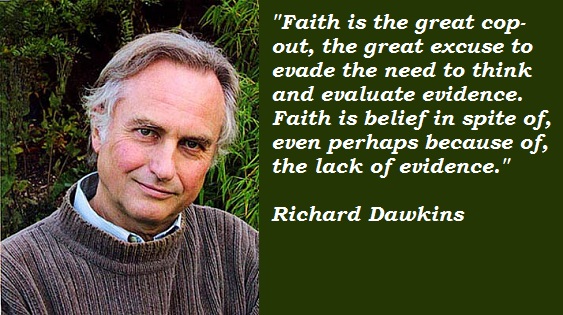 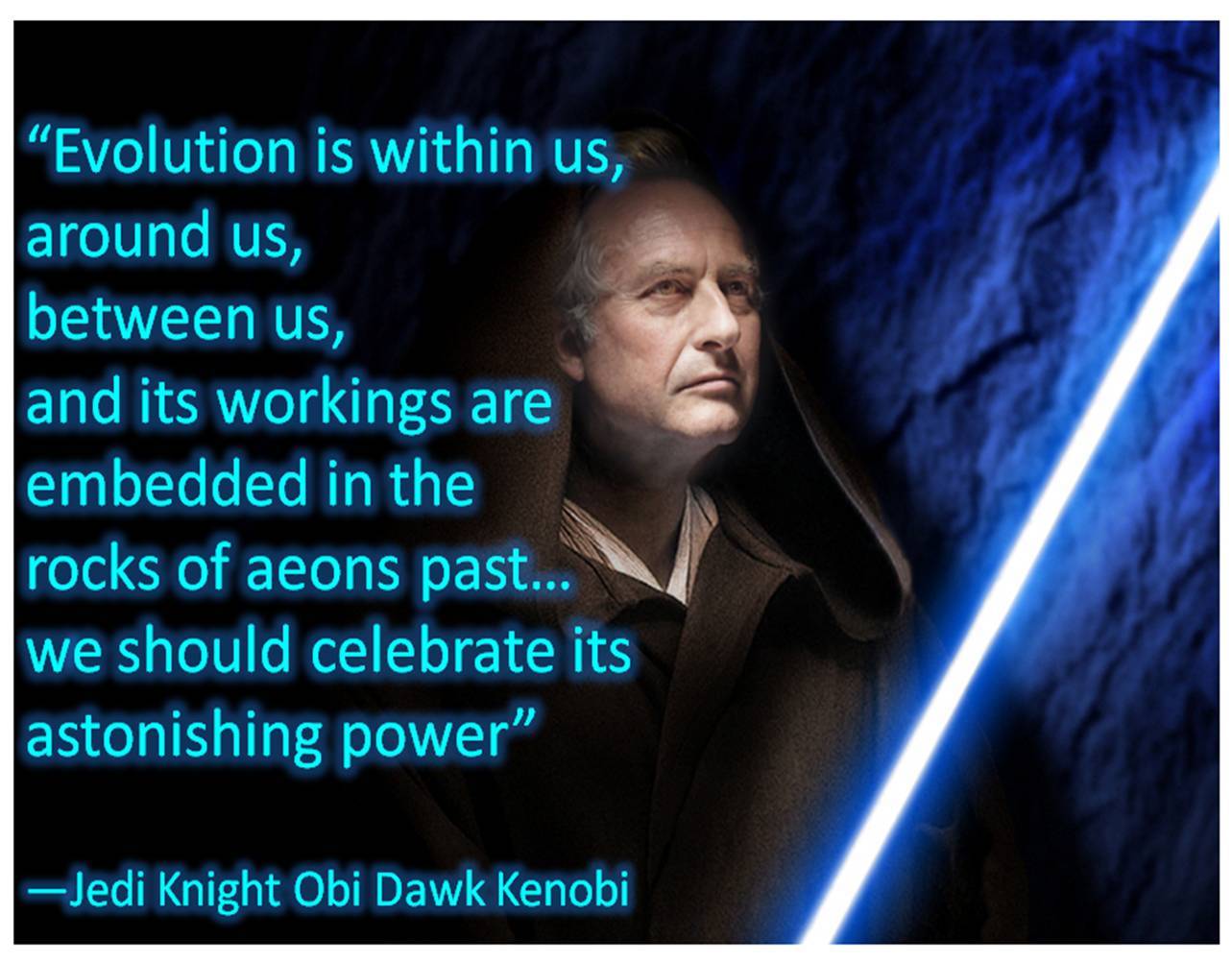 We are a very, very unusual species.

I am one of those scientists who feels that it is no longer enough just to get on and do science. We have to devote a significant proportion of our time and resources to defending it from deliberate attack from organised ignorance.

I once wrote that anybody who believes the world is only 6,000 years old is either ignorant, stupid, insane or wicked.

The idea of an afterlife where you can be reunited with loved ones can be immensely consoling - though not to me.

The universe we observe has precisely the properties we should expect if there is, at bottom, no design, no purpose, no evil, no good, nothing but blind, pitiless indifference.

Intelligent life on a planet comes of age when it first works out the reason for its own existence.

I accept that there may be things far grander and more incomprehensible than we can possibly imagine.

Natural selection is anything but random.

Sometimes I think it's possible to mistake desire for clarity and talking in a no-nonsense way for aggression.

If ever there was a slamming of the door in the face of constructive investigation, it is the word miracle. To a medieval peasant, a radio would have seemed like a miracle.

God exists, if only in the form of a meme with high survival value, or infective power, in the environment provided by human culture.

I'm a cultural Christian in the same way many of my friends call themselves cultural Jews or cultural Muslims.

Segregation has no place in the education system.

I am very comfortable with the idea that we can override biology with free will.

It would be intolerant if I advocated the banning of religion, but of course I never have.

It's very likely that most mammals have consciousness, and probably birds, too.

Metaphors are fine if they aid understanding, but sometimes they get in the way.

Physicists are working on the Big Bang, and one day they may or may not solve it.

Something pretty mysterious had to give rise to the origin of the universe.

At the deepest level, all living things that have ever been looked at have the same DNA code. And many of the same genes.

Much more quotes by Richard Dawkins below the page.

I'm not one of those who wants to purge our society of our Christian history.

My decision to be a scientist was a bit of a drift really, more or less by default.

My interest in biology was pretty much always on the philosophical side.

Evolution never looks to the future.

I didn't have a very starry school career, I was medium to above average, nothing special.

I don't know what to think about magic and fairy tales.

I was confirmed at my prep school at the age of 13.

The question of whether there exists a supernatural creator, a God, is one of the most important that we have to answer. I think that it is a scientific question. My answer is no.

When I say that human beings are just gene machines, one shouldn't put too much emphasis on the word 'just.' There is a very great deal of complication, and indeed beauty in being a gene machine.

Of course in science there are things that are open to doubt and things need to be discussed. But among the things that science does know, evolution is about as certain as anything we know.

I think looking back to my own childhood, the fact that so many of the stories I read allowed the possibility of frogs turning into princes, whether that has a sort of insidious affect on rationality, I'm not sure. Perhaps it's something for research.

But perhaps the rest of us could have separate classes in science appreciation, the wonder of science, scientific ways of thinking, and the history of scientific ideas, rather than laboratory experience.

Science coverage could be improved by the recognition that science is timeless, and therefore science stories should not need to be pegged to an item in the news.

Scientists disagree among themselves but they never fight over their disagreements. They argue about evidence or go out and seek new evidence. Much the same is true of philosophers, historians and literary critics.

By all means let's be open-minded, but not so open-minded that our brains drop out.

We are all atheists about most of the gods that societies have ever believed in. Some of us just go one god further.

I am against religion because it teaches us to be satisfied with not understanding the world.

One of the things that is wrong with religion is that it teaches us to be satisfied with answers which are not really answers at all.

There may be fairies at the bottom of the garden. There is no evidence for it, but you can't prove that there aren't any, so shouldn't we be agnostic with respect to fairies?

Isn't it sad to go to your grave without ever wondering why you were born? Who, with such a thought, would not spring from bed, eager to resume discovering the world and rejoicing to be part of it?

The meme for blind faith secures its own perpetuation by the simple unconscious expedient of discouraging rational inquiry.

Religion is about turning untested belief into unshakable truth through the power of institutions and the passage of time.

Let us try to teach generosity and altruism, because we are born selfish.

The essence of life is statistical improbability on a colossal scale.

If children understand that beliefs should be substantiated with evidence, as opposed to tradition, authority, revelation or faith, they will automatically work out for themselves that they are atheists.

It has become almost a cliche to remark that nobody boasts of ignorance of literature, but it is socially acceptable to boast ignorance of science and proudly claim incompetence in mathematics.

Today the theory of evolution is about as much open to doubt as the theory that the earth goes round the sun.

Many of us saw religion as harmless nonsense. Beliefs might lack all supporting evidence but, we thought, if people needed a crutch for consolation, where's the harm? September 11th changed all that.

The chances of each of us coming into existence are infinitesimally small, and even though we shall all die some day, we should count ourselves fantastically lucky to get our decades in the sun.

My personal feeling is that understanding evolution led me to atheism.

Religious fanatics want people to switch off their own minds, ignore the evidence, and blindly follow a holy book based upon private 'revelation'.

Nothing is wrong with peace and love. It is all the more regrettable that so many of Christ's followers seem to disagree.

Personally, I rather look forward to a computer program winning the world chess championship. Humanity needs a lesson in humility.

A universe with a God would look quite different from a universe without one. A physics, a biology where there is a God is bound to look different. So the most basic claims of religion are scientific. Religion is a scientific theory.

The enlightenment is under threat. So is reason. So is truth. So is science, especially in the schools of America.

The Bible should be taught, but emphatically not as reality. It is fiction, myth, poetry, anything but reality. As such it needs to be taught because it underlies so much of our literature and our culture.

We humans are an extremely important manifestation of the replication bomb, because it is through us - through our brains, our symbolic culture and our technology - that the explosion may proceed to the next stage and reverberate through deep space.

Only the gentle are ever really strong.

If a man can bridge the gap between life and death, if he can live on after he's dead, then maybe he was a great man.

The gratification comes in the doing, not in the results.

Being a good actor isn't easy. Being a man is even harder. I want to be both before I'm done.

Being an actor is the loneliest thing in the world. You are all alone with your concentration and imagination, and that's all you have.

An actor must interpret life, and in order to do so must be willing to accept all the experiences life has to offer. In fact, he must seek out more of life than life puts at his feet.

I also became close to nature, and am now able to appreciate the beauty with which this world is endowed.

To me, acting is the most logical way for people's neuroses to manifest themselves, in this great need we all have to express ourselves.

There is no way to be truly great in this world. We are all impaled on the crook of conditioning.

The only greatness for man is immortality.

Studying cows, pigs and chickens can help an actor develop his character. There are a lot of things I learned from animals. One was that they couldn't hiss or boo me.

To grasp the full significance of life is the actor's duty; to interpret it his problem; and to express it his dedication.

To my way of thinking, an actor's course is set even before he's out of the cradle.

When an actor plays a scene exactly the way a director orders, it isn't acting. It's following instructions. Anyone with the physical qualifications can do that.

But you can't show some far off idyllic conception of behavior if you want the kids to come and see the picture. You've got to show what it's really like, and try to reach them on their own grounds.

I think the one thing this picture shows that's new is the psychological disproportion of the kids' demands on the parents. Parents are often at fault, but the kids have some work to do, too.