See the gallery for quotes by Simon Winchester. You can to use those 7 images of quotes as a desktop wallpapers. 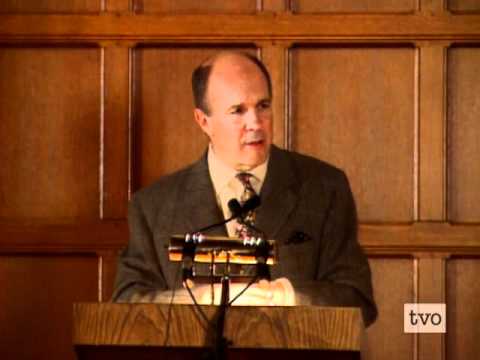 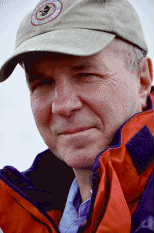 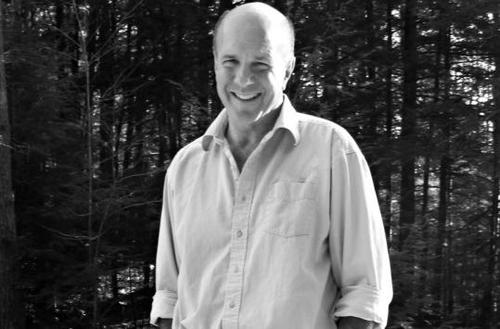 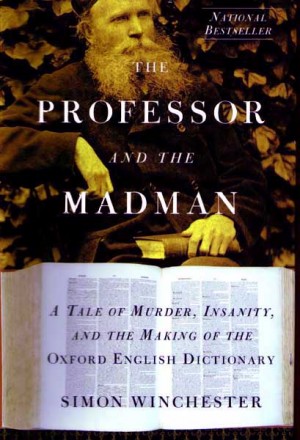 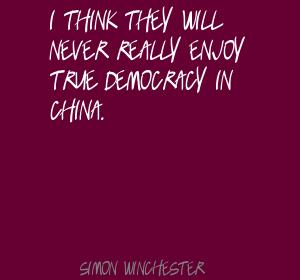 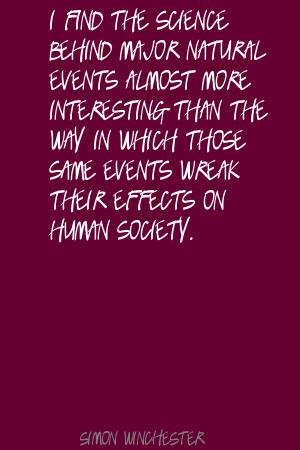 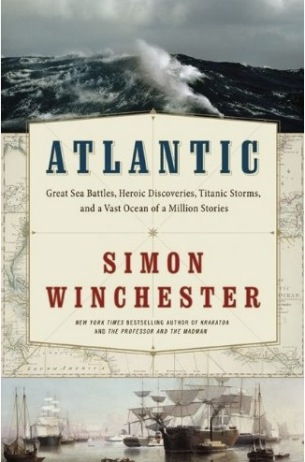 I find the science behind major natural events almost more interesting than the way in which those same events wreak their effects on human society.

I think they will never really enjoy true democracy in China.

I've come to accept who my readers turn out to be, rather than having some sort of demographic target.

Nothing is eternally stable, and even Kansas isn't really in Kansas anymore. The earth is in a constant state of flux.

All of those broken bones in northern Japan, all of those broken lives and those broken homes prompt us to remember what in calmer times we are invariably minded to forget: the most stern and chilling of mantras, which holds, quite simply, that mankind inhabits this earth subject to geological consent - which can be withdrawn at any time.

Having been in the newspaper business for a long, long time, I often wonder, Why do we actually need to know about something like a bus crash in Bangladesh that has no effect on us at all? That can be nothing other than voyeurism.

I do as much bookish research as I can but when I sit down to write, often I think, 'Wait, I was there.' That is one of the great advantages of having wandered around the world and lived in so many places and met such fascinating people.

I don't hero worship for the sake of hero worship. When I find people who are truly remarkable - and I think Joseph Needham is a classic example - I do value their counsel.

Millions upon millions of people came here full of hope and aspiration to this extraordinary land of liberty and opportunity, and helped build the United States. So the Atlantic Ocean was absolutely critical to the story of America.

Nature is not evil. The world occasionally shrugs its shoulders, and people get knocked off. The earth, for geological reasons that are well known, is a fairly risky place to live. To be evil, you have to have intent. Any remarkable natural happening in which no human will is employed cannot be regarded as evil.

So research is a terribly imperfect science, and you learn an awful lot more after you've published a book, because people keep writing to you and saying, 'Oh, gosh, I was related to such and such a character and I have a letter in my possession.'

The nature of catastrophe is, after all, reasonably unvarying in the way it ruins, destroys, wounds and devastates. But if something can be learned from the event - not least something as profound as the theory of plate tectonics - then it somehow puts the ruination into a much more positive light.

To be perfectly honest the old habits, specifically deadlines, still very much inform what I do. I am brutally disciplined about getting manuscripts in on time.

We associate the North Atlantic with cod. The motto of Newfoundland used to be 'In cod we trust.' It was a joke, but it was essentially true. But there is no cod anymore. And that's extraordinary. It's all because of either greed or politics - Canadian politics.

We kid ourselves that we're trying to be empathetic with the human condition from a distance, but I don't think that is it at all. It's stupid; it's a waste of time. But when the earth flexes its muscles, that's rather different. That's a powerful reminder of where we are.

Why do we as a people choose to live in beautiful and risky places? Beautiful places are relatively dangerous; the forces that made them beautiful are the same forces that will ultimately destroy them.

Those entrusted with arms... should be persons of some substance and stake in the country.

There have been a number of us working very, very hard to bring myth and fairy tales into public consciousness, through fantasy literature and other media. I hope we're succeeding in some small way.

We've always lived in dark times. There has always been a range of human experience from the sublime to the brutal, and stories reflect it. It's no less brutal now; each age has its horrors.

When I started in the business, there was a thing called adult fantasy, but nobody quite knew what it was, and most publishers didn't have an adult fantasy list. They had science fiction lists, which they stuck a little bit of fantasy into.

When I was younger, I was in love with everything about the British Isles, from British folklore to Celtic music. That was always where my passions were as a young girl, and so I studied folklore as a college student in England and Ireland.

Much more quotes by Simon Winchester below the page.

Filmmaking can be a fine art.

Read the folklore masters. Go to galleries. Walk in the woods. That's what you need to be an artist or storyteller.

Robert Jordan, whether he's writing with passion or not, I don't know.

A good novel editor is invisible.

But for me, really, the written word is always stronger than film.

I divide my time between homes in Arizona and England, six months a year in each place.

I have a great respect for the academics who are working with the source material. My hat's off to them.

I like Celtic folk music, Native American music, and any kind of early music. There isn't a lot of music that I don't like... except for Show Tunes.

I wanted to be a scientist. But I had no math skills.

I was a great fan of Jim Henson.

I'm also looking for gems that the average reader might have missed.

I'm an artist, I'm not an academic folklorist.

I'm working on a very long series of paintings based on desert folklore.

I've only been living in England for the last 10 years, if you don't count my student years.

My book collection is primarily in America, since that's where I've lived most of my life.

There are plenty of bad editors who try to impose their own vision on a book.

What I find interesting about folklore is the dialogue it gives us with storytellers from centuries past.

I'd had no particular interest in the Southwest at all as a young girl, and I was completely surprised that the desert stole my heart to the extent it did.

I'd like to encourage people to please keep reading-and most importantly, to please keep trying new writers. The only way we can bring fresh new material into the field is if people go out and buy it.

In more recent years, I've become more and more fascinated with the indigenous folklore of this land, Native American folklore, and also Hispanic folklore now that I live in the Southwest.

Magic Realism is not new. The label's new, the specific Latin American form of it is new, its modern popularity is new, but it's been around as long as literature has been around.

One of the best things about folklore and fairy tales is that the best fantasy is what you find right around the corner, in this world. That's where the old stuff came from.

Since fantasy isn't about technology, the accelleration has no impact at all. But it's changed the lives of fantasy writers and editors. I get to live in England and work for a New York publisher!

The first job I was offered was as an editorial assistant. I think it was the best thing for me, in terms of being a storyteller by nature, to have spent years being an editor because I learned so much from it.