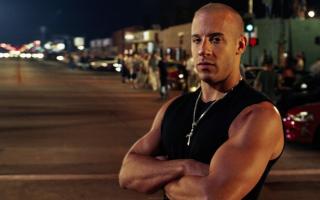 See the gallery for quotes by Vin Diesel. You can to use those 8 images of quotes as a desktop wallpapers. 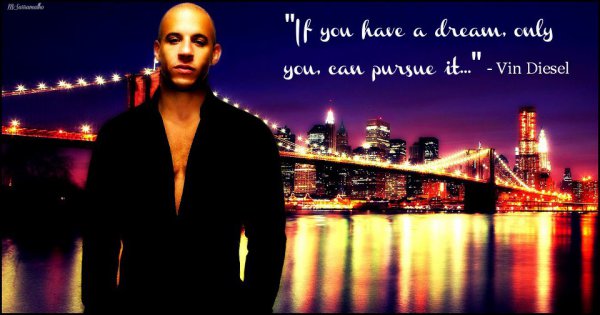 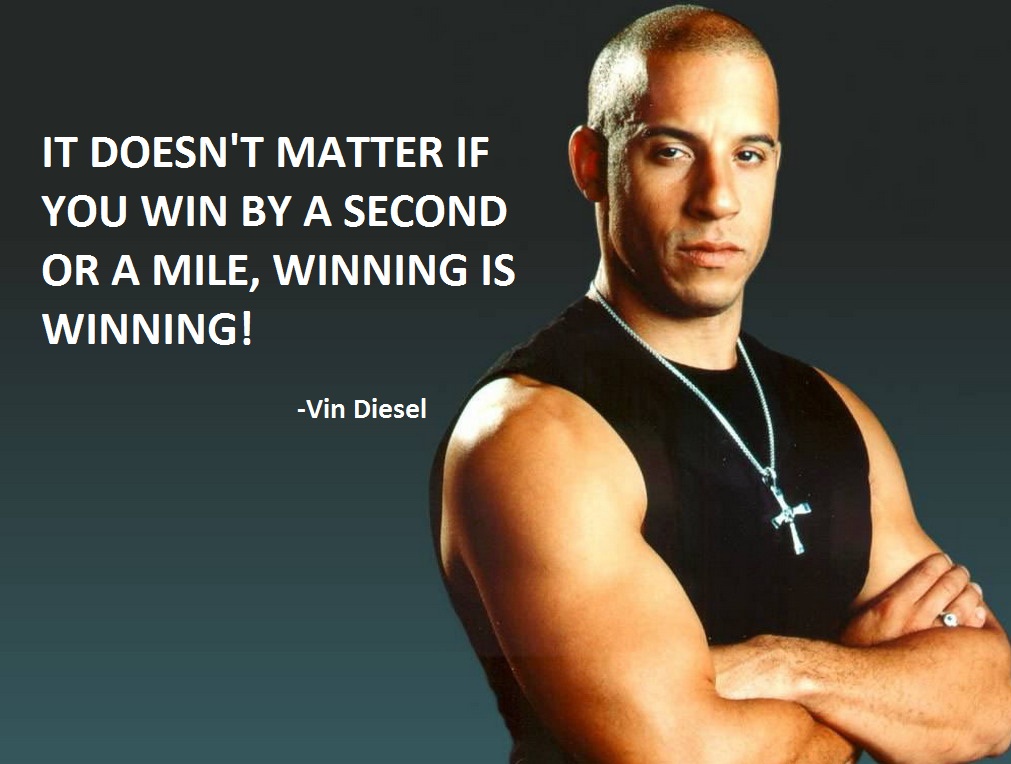 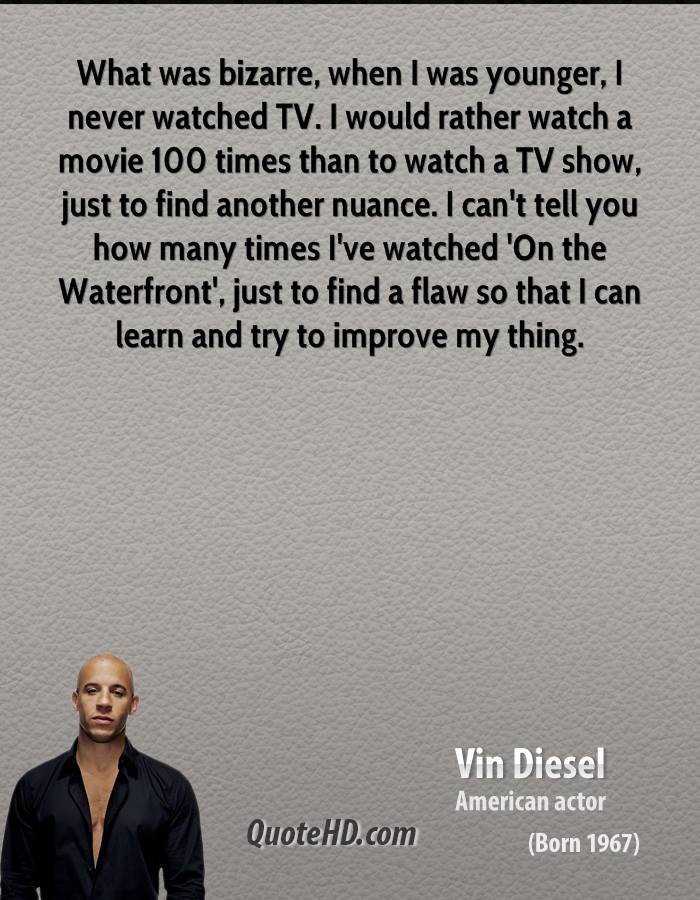 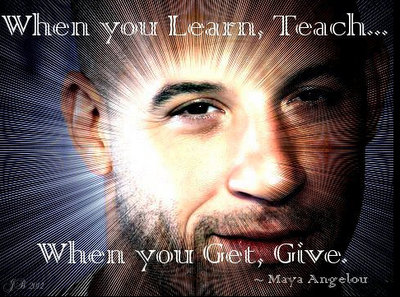 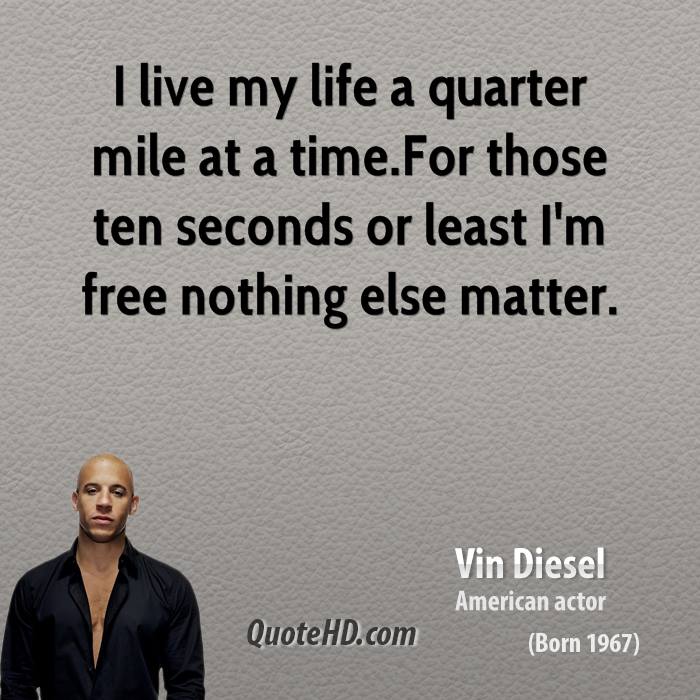 I love women more than anything.

I think a few pictures at a time.

I used to feel guilty about owning a console.

I was a bouncer for ten years in New York City.

I'm the most ambitious person you ever met.

I've been auditioning since I was 7 years old.

If it's an amazing role, I'll do anything.

If you think about my filmography, I have never done a movie that a kid could go see, except for 'Iron Giant,' and I'm not even on the screen.

It's really bizarre because no one knows this, but elephants have killed more animal trainers than any other animal.

Most of my confidence came from being with ladies, because I certainly wasn't getting any acting jobs.

My mom insisted on multigrain bread and never allowed soda in the house.

The films that I do are deep, introspective, brooding roles that you're in this heavy headspace all the time.

The idea of exploring character relations and their development over a decade has to be appealing for any actor who cherishes his craft.

The one thing I will never do is become pigeonholed.

The only way anyone knows which girl I'm with is if a one-night stand goes on 'Howard Stern.'

The whole year I was in LA I got into telemarketing and learned how to make money. Five years later that skill helped me make my first film.

Well, love motivates me in everything I do.

When I got on the set of 'Saving Private Ryan,' I discovered, to my amazement, that Steven Spielberg is a gamer.

When your co-stars are 9-month-old babies, you fall in love. You start thinking, When am I going to have my own?

You get a timeless cool card in New York.

You make movies for the people. If critics happen to like them too, well, that's a home run.

I'm not really afraid of the dark, except if I'm walking. The thing that scares me the most is the possibility of walking into a wall and busting my lip.

When I first did 'The Fast and the Furious', I didn't want there to be a sequel on the first one. I thought, 'Why would you rush to do a sequel - just because your first film is successful?'

Much more quotes by Vin Diesel below the page.

If you had asked me back in grade school what I wanted to be when I grew up, I would have said my first choice was an actor, but if I couldn't be that, I'd want to be a superhero.

It's like you have a child and you think, 'Everything that I've done up until this point is insignificant in comparison to being a father.' It's a beautiful, beautiful thing.

My gut feeling about sequels is that they should be premeditated: You should try to write a trilogy first or at least sketch out a trilogy if you have any faith in your film.

I am flattered that they think that many people would enjoy my work. I don't approach any genre a different way than I may approach another one. I treat every role I do like a role worthy of applying whatever kind of tactic, process and talent I have.

I don't think a lot of actors talk about it, but there's usually a process where you essentially purge yourself of the character that you played prior to the movie.

I grew up in an artists' community in New York, in a building that was government-subsidised for artists. No one made any money, but they made art for the sake of art.

I was raised in New York City and raised in the New York City theater world. My father was a theater director and an acting teacher, and it was not uncommon for me to have long discussions about the method and what the various different processes were to finding a character and exploring character and realizing that character.

I was the oldest of the children in my family. I had to do a lot of diaper-changing and lunch-making. I was taking my little sister to ballet, picking up my brother, sort of being a super-nanny.

Tags: Between, Picture, Why

If you take my performance or my understanding of the role and my appreciation for story and then dress it in CGI, that I guess becomes an action film.

It's hard for me to talk about Dom right now because I am Dom right now. So it's a really strange exercise to try to reflect on something that I am at the moment. But I guarantee you that when I'm done with the movie and you ask me that question, I'll be able to give you something insightful.

My mother gave me this book called Feature Films at Used Car Prices by a guy named Rick Schmidt. I gotta credit the guy, cuz he gave me the most practical advice. It empowers you.

Obviously, for me, story is first and foremost, even in the face of the attractive idea of having all the cast there, or having a great piece of talent come to it.

The thing that stood out above and beyond all the experiences was this relationship with the nine-month-old baby. On weekends, I'd be thinking about going back to set on Monday just to see the baby.

The video game culture was an important thing to keep alive in the film because we're in a new era right now. The idea that kids can play video games like Grand Theft Auto or any video game is amazing. The video games are one step before a whole other virtual universe.

What was bizarre, when I was younger, I never watched TV. I would rather watch a movie 100 times than to watch a TV show, just to find another nuance. I can't tell you how many times I've watched 'On the Waterfront', just to find a flaw so that I can learn and try to improve my thing.

When you go to the movies with your whole family, it's a different experience. For some reason, it's something that you're all doing together and you take away something special in that.

You live these three months in this reality, in this dark reality. You don't want to do those films every year because they're taxing. I started smoking a lot of cigarettes.

It's insecurity that is always chasing you and standing in the way of your dreams.

You know when something feels so good but you're afraid to feel good about it? So you kinda hold back? Everyone says, Congratulations, you must be so happy. And you say something stupid like, I'm just doing what little I can with what little I have.

We all deal with being unfairly judged.

I always have issues with trust.

You break her heart, I'll break your neck.

I grew up with all kinds of people.

My mom used to say that I became a fighter and a scrapper and a tough guy to protect who I am at my core.

With age, you get to a place where you don't want to knock people out. You just want to give people a hug.

It wasn't until I went to college and I got my first motorcycle that I understood the thrill of speed.

I am definitely a person of color.

I do practice martial arts, more as a recreational thing, but a lot of my friends have been heavyweight champions the in mixed martial arts world.

I haven't had that many weird encounters with fans, thank God.

I love thinking about the film, the project and committing myself as much as possible.

I shaved my head about 15 years ago and the first time I shaved it, I started running my hand through my hair and it was very therapeutic.

My mother is the most supportive mother in the world, she's magical.

If you're the type of person who has to fulfill your dreams, you've gotta be resourceful to make sure you can do it. I came out to California when I was 21, thinking my New York credentials would take me all the way. I came back home a year later all dejected and a failure.

A person in my position has to restrain himself.

A transvestite spends her entire life trying to look as feminine as possible and I have clearly spent mine celebrating my masculinity.

Deal-making goes on with any job.

Film is my hobby, so I will work well through the night to develop films, whatever film I'm doing or dream projects I have.

I could care less about being an action actor like Stallone or Schwarzenegger.

I have dangerous bones in my body.