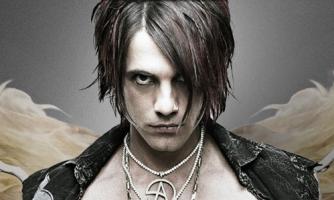 See the gallery for quotes by Criss Angel. You can to use those 8 images of quotes as a desktop wallpapers. 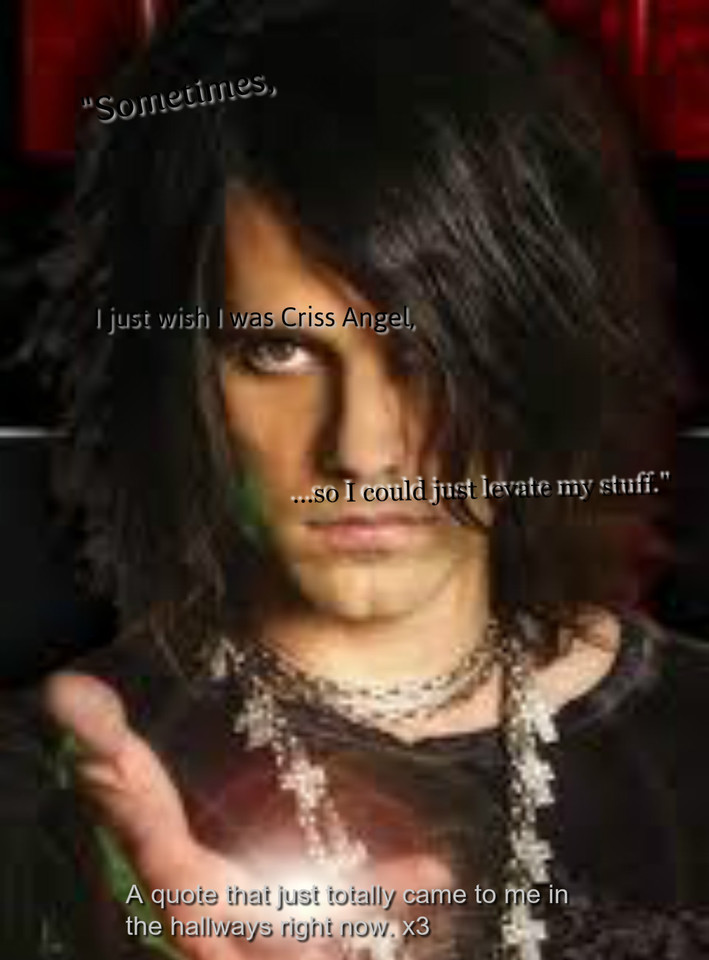 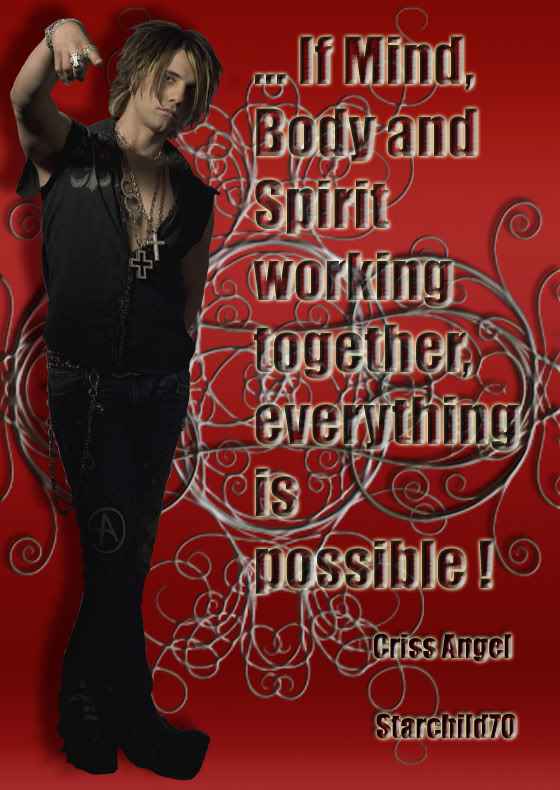 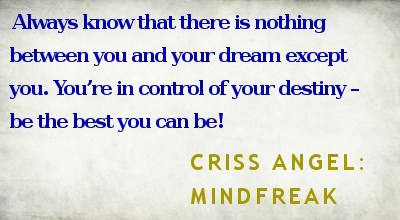 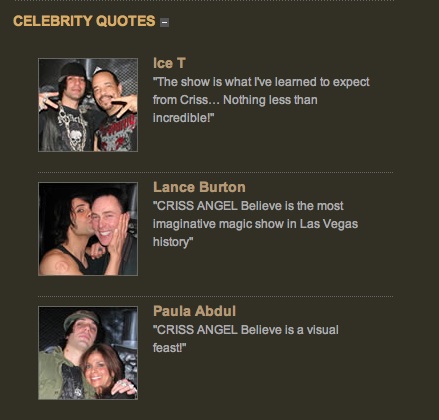 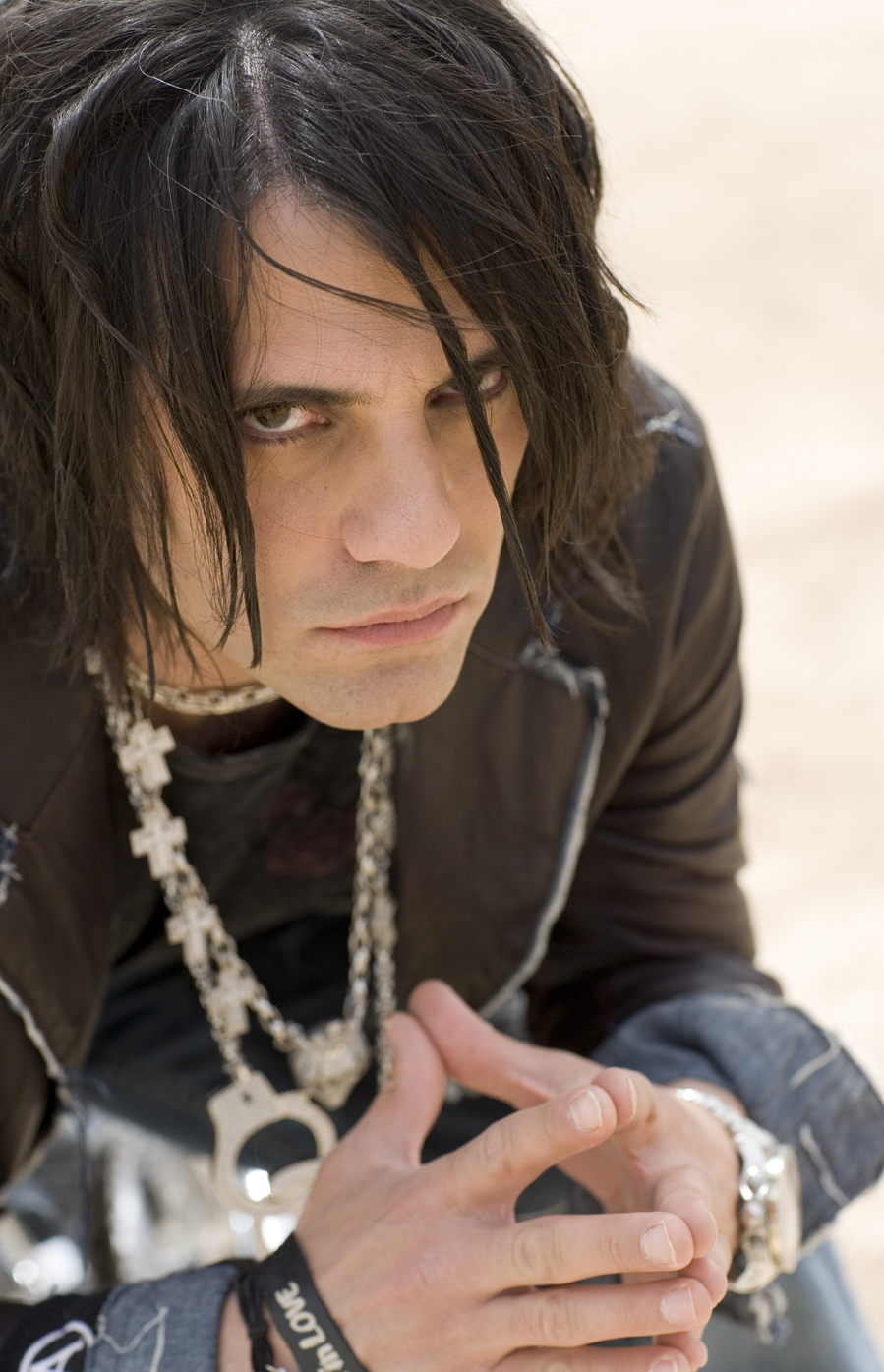 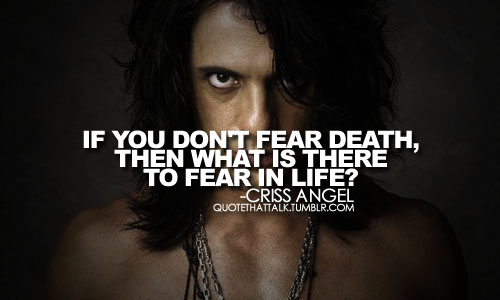 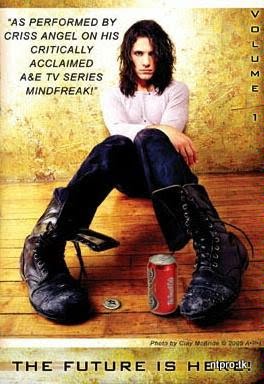 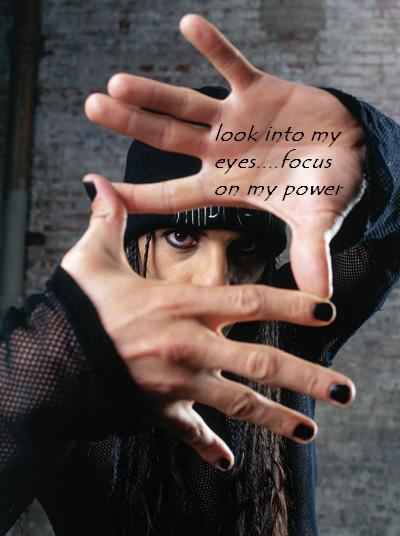 I like to say magic is the world's second oldest profession, a mystical and often awe-inspiring spectacle that, throughout the ages, has blended superstition, trickery and religion.

I put my life in danger every time I do some of these demonstrations, whether it's in the audience hanging upside down or on the stage. We now have a lot of dangerous stunts where anything can go wrong. In fact, I have fallen two stories and landed on the stage, so I am well aware of the dangers.

I think that the problem is that people fear so many things and they don't live life to its fullest. And for me as an artist, if God should want me to come this Wednesday to the end of my life, so be it.

I think we can really use magic in a way never attempted before to inspire these children, help rally their self-confidence and even help them develop social skills. This is a national effort, not just here in Las Vegas. I know we can give them a true passion.

I wasn't a smart kid and I still don't think I'm too smart when it comes to book smart, but I was very good with what I knew and with my craft and I think that was my calling in life. But even today I never went to college.

I wish what I do was all real. Some of it's real, some of it's an illusion and I try to blur the line between both, but unfortunately I've got to be honest with you. Taking a $1 bill and turning it into a $100 - unfortunately it's not real.

I'm actually tougher on myself as I get older. It's a vicious cycle. The things that are important in life are the things that you can't buy in life: love, health and happiness. I say that, and I believe that, and I try to live that.

If people are fans of 'Mindfreak,' they are going to be so excited with 'Believe.' They are actually going to see those illusions that people think can only happen with trick photography.

Indeed, most magicians catch the bug as kids. My first audience was my family in Long Island. My first 'assistant' was my mother, whom I levitated on a broom in our living room.

It's so funny looking back, but my so-called overnight success actually took 15 years. I remember when I didn't have any money, and my only car was mom's Hyundai.

Magic is the oldest part of the show business profession. It can now be used as a forward-thinking tool to build a child's confidence. It has been an amazing part in many entertainers' lives, including Steve Martin and the late Johnny Carson.

Magic speaks to the child in all of us. No matter how sophisticated we become, there's still a part of us who wants to believe in an alternative reality, where we can defy the laws of nature.

One of my inspirations, Harry Houdini, remains an icon of the art because he defied our primal fears. His demonstrations in the early 20th century, especially his escape from the Chinese water torture cell, represented triumph over suffocation, drowning, disorientation and helplessness.

One of the most gratifying things I get as an artist is when people watch me do these different demonstrations, and they in some way feel empowered by what I'm doing so they can confront their own fears. Maybe it's the fear of getting in an elevator; maybe it's the fear of going on a plane and seeing the world.

Oprah is signed on to help, and a lot of celebrity friends have agreed to help me raise money for Make-A-Wish. We want to make the world a better place for innocent children. I cried my heart out when my father died from cancer. I wish I was smarter, wiser like a doctor, to save these children from dying.

Picking locks or handcuffs for me is not really a big deal, I can do it pretty much in seconds, I've been doing since I was 14 years old. I used to sit on my bed as a kid with a pick set and you know just picking locks and stuff, so I'm used to it.

The days of television as we knew it growing up are over. You have a bigger, wider world audience on the Internet, larger than any American television series. People don't watch television in the same context as before. Nowadays they watch their television on the Internet at their convenience. That's the whole wave, and it's now - not the future.

The first time I thought about attempting a body suspension was after watching a documentary on rites-of-passage ceremonies from other cultures. I was completely intrigued by what these people put their bodies through.

The magic kit we developed with Idea Village is an extraordinary success in 40,000 stores across America. The TV commercial we shot for it has produced amazing results - unbelievable.

There are somewhere between 20,000 and 30,000 working magic professionals in the world, and since we debuted our Magic Kit, we have sold over 1 million. So it's for people who have a strong interest, but be it for one trick or a lifetime, we will be there for them. We will guide them so they don't waste their money.

Well I have you know, several CD's out; one of my best friends is Sully Erna from Godsmack - he is Godsmack, and we're going to be working on an album together.

Well I think everything up to this point that I've been exposed to in my life has had an influence on me in some way, shape, or form even if I'm not conscious of it. So I definitely think that my studies in wu-shu, kung-fu, karate, kenpo, taikwando, all of that stuff certainly has an affect. I don't think I follow any discipline traditionally.

Well to be perfectly frank with you I never created art or have done demonstrations for anyone before myself artistically. I always do it to try to push my own envelope to be the best I can be.

Well, I had an immense respect for Cirque du Soleil when I first say them in the '80s on a television show and just thought, you know, this group is really reinventing the circus, as you know. Because there wasn't three rings. There were no animals.

Much more quotes by Criss Angel below the page.

When my father died in my arms it had such a profound affect on me that at that very moment when my dad passed I realized that I needed to face my own fears.

You can just go to a magic shop or magic builder and buy what most magicians do, but that's not what I'm about. With 'Mindfreak' on television and 'Believe' live, I want to bring things that people have never seen before. That process is very difficult. It's very challenging, and you never know how long it's going to take - months or years.

You can't please everyone, and trying to is the kiss of death. I don't care about Wayne Newton's demographics. When I do, I'll know that it's time to quit.

If we all looked out for each other a little bit more, I think we wouldn't have a lot of the crisis that we have in today's society.

Pain is a beautiful thing. When you feel pain, you know you're alive.

I've never formally trained for pain management, but I have a good understanding of how to conquer it. I just analyze the pain, feel it in the moment, and then mentally become numb to it.

And you know, I'm so used to going 100 miles an hour in every direction and sleeping you know, two, three hours a night, and that's the way I live.

I am a street performer as much as I am a stage performer. Yes, I have a television show, but every trick, every 'Mindfreak' you see, I can do live.

I am a very emotional person.

I think if you would have cut Houdini with a knife, blood wouldn't come out, PR would.

I want to ride my motorcycle up the side of the Luxor to the light and vanish.

I worked 18 years to become an overnight success. Now MagicPlace.com will short circuit that process for people.

I've been a live performer longer than I've been a television performer. For me, live is where it's at.

I've never, ever had any therapy. Some might say I need it, but I've never seen a shrink or a psychologist or anything like that.

Sometimes my art is just an illusion - or is it?

We are thrilled to work with Fun and share the same sentiment that we want do some really exciting and innovative things for the magic community.

We weren't poor growing up on Long Island, but it wasn't lavish - just a regular middle-class house.

When the mind, body, and spirit work together, I believe anything is possible.

Houdini connected to people on an emotional level so that when he would escape that straight jacket it wasn't about the straight jacket. It was about people looking at it and escaping poverty. When you have that it's the truest form of magic.

I came up with the term 'mindfreak' because I didn't like the word 'magician.' I felt like I wanted to coin a term that would be basically the reaction to my art. It would be a mindfreak and so that's why I came up with that. But, many people say I'm really a student of humanity and psychology.

I had an amazing childhood, lots of love. But my dad worked his tail off, getting up at 4 in the morning and going off at 5, 6 o'clock, yet he always had time to spend with his kids and his wife.

I have mentally overcome situations most of you would be terrified to ever attempt: heights, fire, needles, spiders, snakes, angry monkeys, being shot, being hit by a car, going blind - you name it, I have been in a situation where I have had to mentally overcome my inherent fears to do my job.

I have my own foundation, which I just started, called Believe Anything Is Possible, which is going to be an organization to help the underprivileged.

I have real TV studios. If I have an idea, I can go shoot it. I can experiment. If I choose to air it or not, it's at my discretion. I don't have to do it to somebody else's time frame.