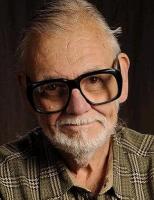 See the gallery for quotes by George A. Romero. You can to use those 8 images of quotes as a desktop wallpapers. 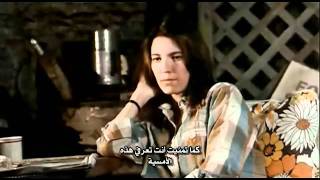 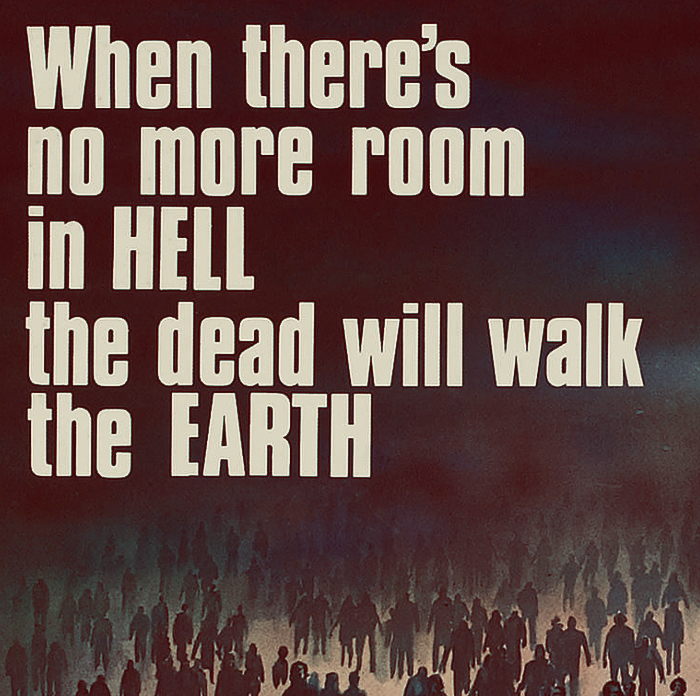 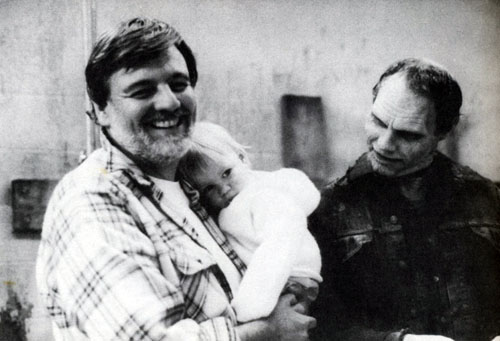 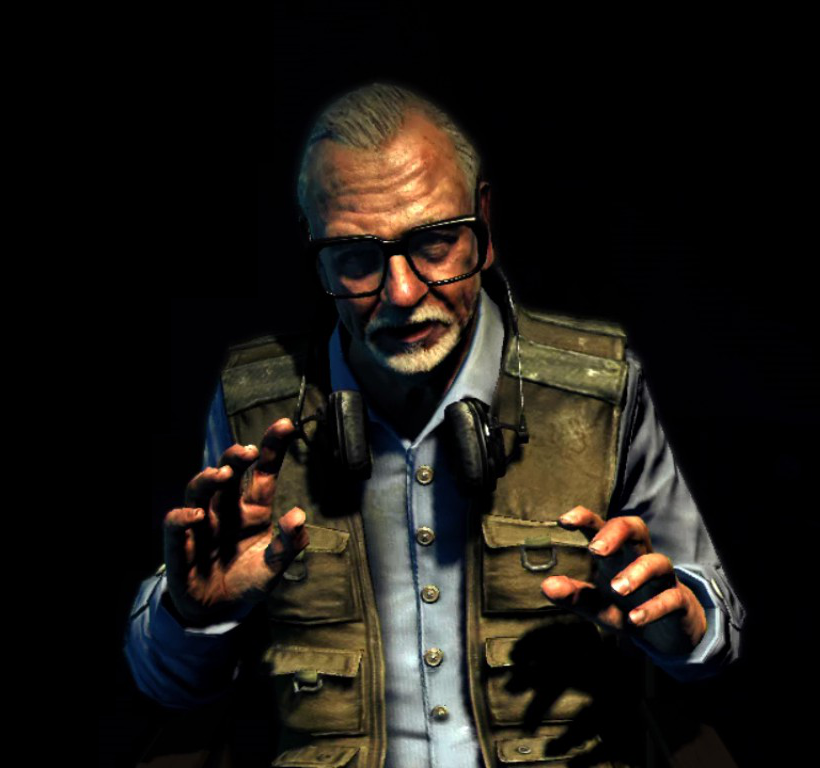 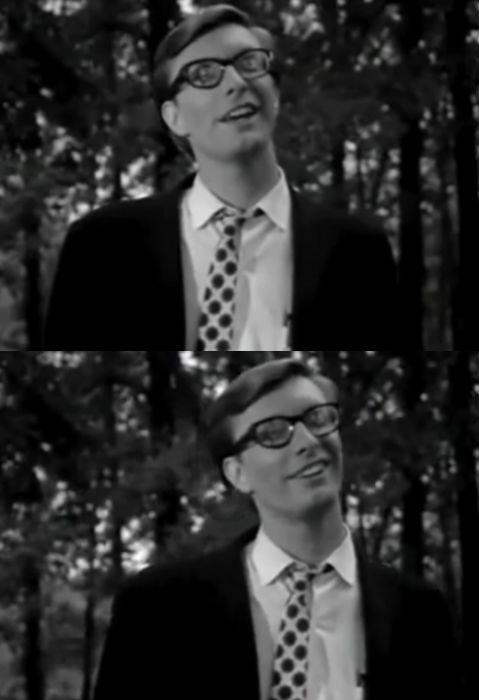 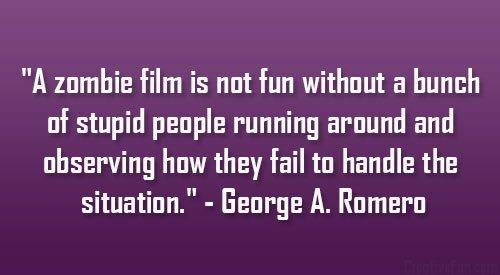 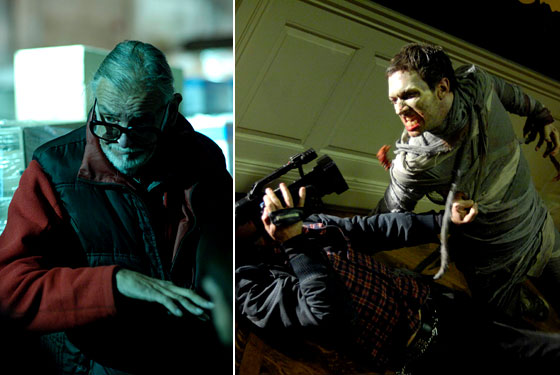 The two great things about computer CG stuff are I can now do gags I would never have dreamed of in the old day.

When I was old enough to go to movies alone, I got to see 'Frankenstein' and 'Dracula' on the big screen. I just fell in love with them.

As great as Ed is, the wisdom out here is that he can't carry a movie. They'll pay him $3 million to be the second banana in Julia Roberts things. But they won't put up $3 million for an Ed Harris movie.

First of all, in the old days, if you wanted to show someone getting shot on film, all you could do was place an effect in the original take. And if you wanted to brighten somebody's face and leave the rest of the room dark, that was a very expensive process.

Horror will always be there, it always comes back, it's a familiar genre that some people, not everyone - it's sort of the cinema anchovies. You either like it or you don't.

Tags: Either, Everyone, Horror

I don't like the new trends in horror. All this torture stuff seems really mean-spirited. People have forgotten how to laugh, and I don't see anybody who's using it as allegory.

I grew up on the old EC comic books before the Comics Code in North American and with all sort of good-natured fun. I never had nightmares I think because all of the old horror stuff that I was exposed to was well meaning in a certain sense.

I really believe that you could do horror very inexpensively. I don't think it has anything to do with the effects, the effects are not the most important parts.

I really liked the helicopter pilot in 'Dawn of the Dead', when he gets bitten and comes out of the elevator. That guy was amazing. He did this incredible walk that we didn't even know about until we started shooting.

I sympathize with the zombies and am not even sure they are villains. To me they are this earth-changing thing. God or the devil changed the rules, and dead people are not staying dead.

I thought Godzilla was a mess, the monster had no character and the humans didn't either. They forgot to make the movie that went along with all these wonderful effects.

My stories are about humans and how they react, or fail to react, or react stupidly. I'm pointing the finger at us, not at the zombies. I try to respect and sympathize with the zombies as much as possible.

My zombies will never take over the world because I need the humans. The humans are the ones I dislike the most, and they're where the trouble really lies.

On the other side of that coin, and far outweighing it, is the fact that I've been able to use genre of Fantasy/Horror and express my opinion, talk a little about society, do a little bit of satire and that's been great, man. A lot of people don't have that platform.

Somehow I've been able to keep standing and stay in my little corner and do my little stuff and I'm not particularly affected by trends or I'm not dying to make a 3D movie or anything like that. I'm just sort of happy to still be around.

There are so many factors when you think of your own films. You think of the people you worked on it with, and somehow forget the movie. You can't forgive the movie for a long time. It takes a few years to look at it with any objectivity and forgive its flaws.

What the Internet's value is that you have access to information but you also have access to every lunatic that's out there that wants to throw up a blog.

Zombies are always moving fast in video games. It makes sense if you think about it. Those games are all about hand-eye coordination and how quickly can you get them before they get you.

I also have always liked the monster within idea. I like the zombies being us. Zombies are the blue-collar monsters.

I expect a zombie to show up on 'Sesame Street' soon, teaching kids to count.

A zombie film is not fun without a bunch of stupid people running around and observing how they fail to handle the situation.

I keep a little notebook of things that I can do to the zombies that might be silly and fun.

I go to conventions and universities and talk to young filmmakers and everybody's making a zombie movie! It's because it's easy to get the neighbors to come out, put some ketchup on them.

Anybody who tunes into Rush Limabaugh already knows what he's going to say and is already inclined to agree. So it winds up creating tribes.

Much more quotes by George A. Romero below the page.

Ever since 'Lassie' and 'Old Yeller', I won't watch animal movies. Animals in movies always die.

For a Catholic kid in parochial school, the only way to survive the beatings - by classmates, not the nuns - was to be the funny guy.

I always thought of the zombies as being about revolution, one generation consuming the next.

I don't think you need to spend $40 million to be creepy. The best horror films are the ones that are much less endowed.

I grew up on DC Comics, moral tales where the bad guys got their comeuppance. To me the gory panels or grotesque stuff just made me chuckle.

I think you're only free if you're working on very low or huge money.

If I fail, the film industry writes me off as another statistic. If I succeed, they pay me a million bucks to fly out to Hollywood and fart.

Tags: Another, Off, Succeed

If one horror film hits, everyone says, 'Let's go make a horror film.' It's the genre that never dies.

Movies are about escape.

Nothing's ever real until it's real.

The guy that made me wanna make movies... and this is off the wall-is a guy named Michael Pal, the British director.

'The Thing from Another World' was the first movie that really scared me.