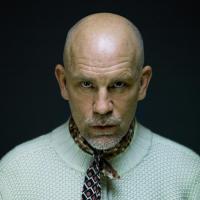 See the gallery for quotes by John Malkovich. You can to use those 6 images of quotes as a desktop wallpapers. 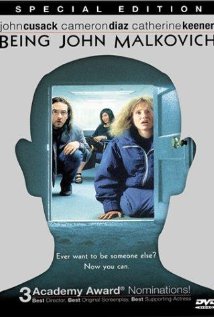 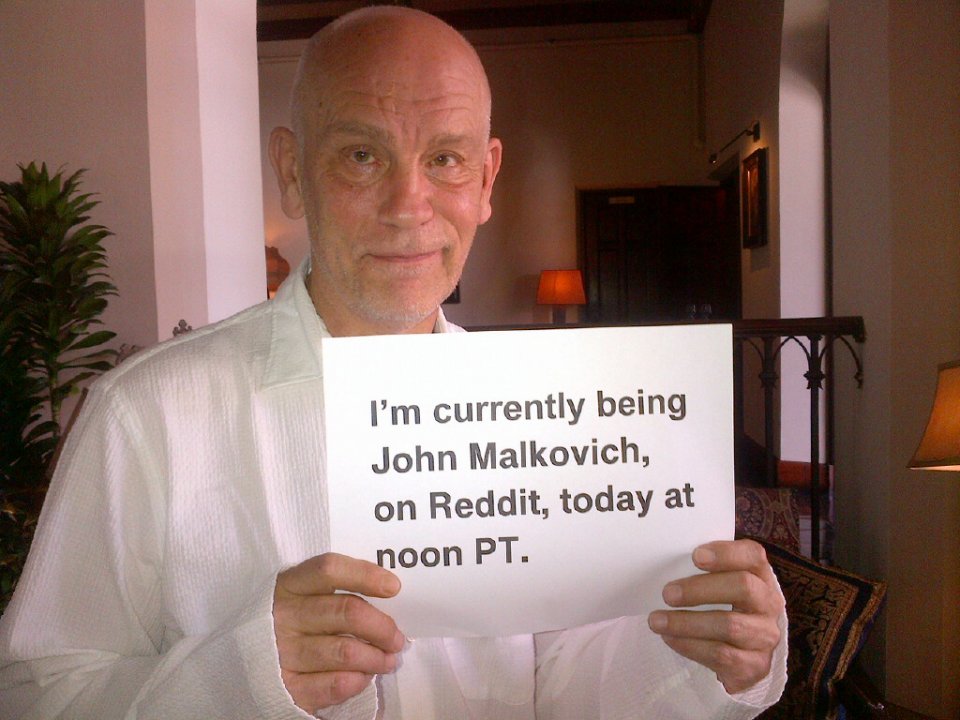 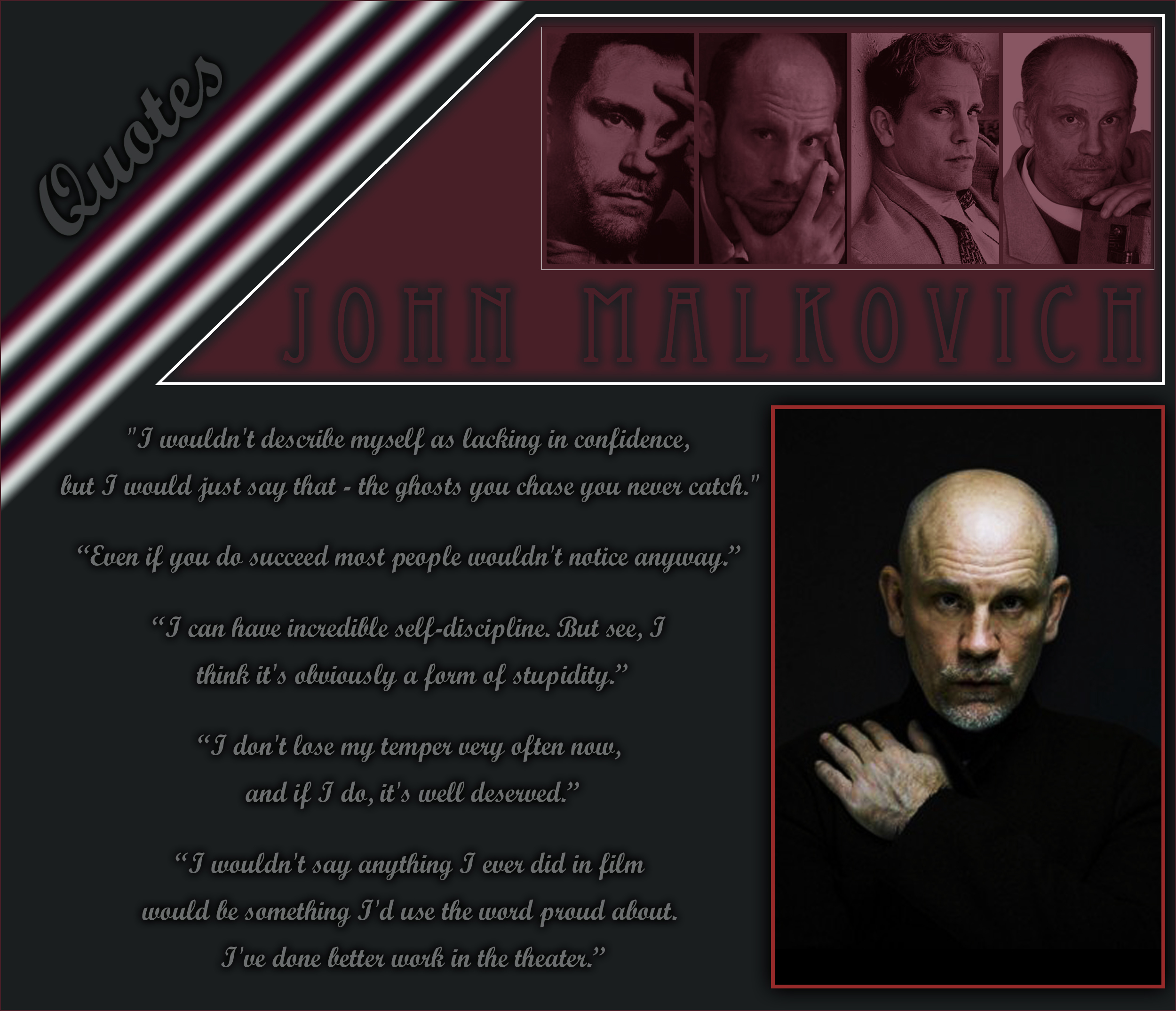 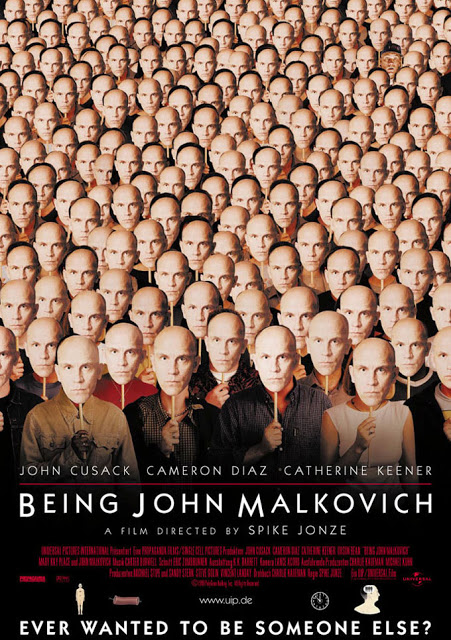 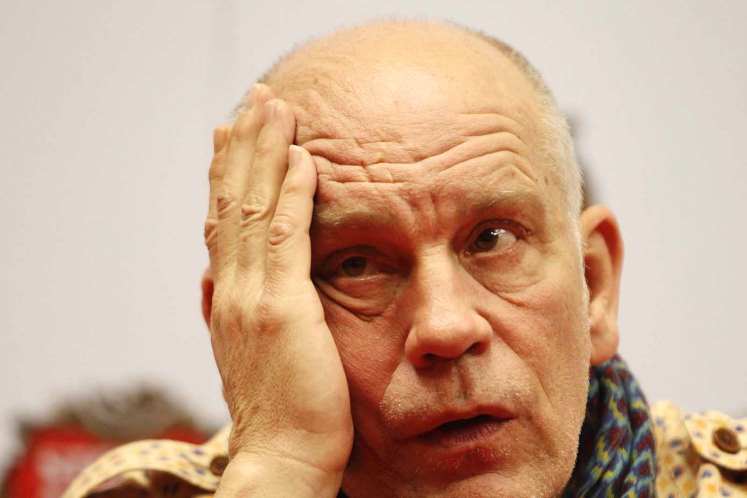 I can have incredible self-discipline. But see, I think it's obviously a form of stupidity.

I don't have a saviour or a royal family.

I don't like things too overstated in the cut or too perfect.

I don't mind tracksuits. At the track.

I don't mind what I play, really.

I don't need to be liked.

I don't really go through a process, it goes through me.

I don't remember my life before I had children.

I don't think my parents know what I do.

I don't throw things or yell.

I find it hard to pre-plan every element of everything I do. It's not my thing.

I go around the world, working with all kinds of people who I love.

I haven't physically attacked anyone in a couple of years.

I like to direct movies, but I don't like to goof around for eight years talking about it.

I love to watch good actors who surprise and amuse me.

I mean, a lot of time rehearsals are taken up with other things other than preparing a character.

I mean, anything that money can be made off will never be a problem to make, no matter what it is.

Much more quotes by John Malkovich below the page.

I never really did a western western.

I only have two rules for my newly born daughter: she will dress well and never have sex.

I still have a temper, I suppose.

I think 1973 was the nadir of fashion. When you watch the coverage from that era, you're struck by the astonishing ugliness of the clothes.

I think people seem to sort of associate me with danger. And I don't see that at all.

I think with actors, if you just don't set about trying to crush their confidence immediately, you're usually OK.

I was never a fanatical movie person.

I wasn't really raised to be the type of person to have doubts.

I wouldn't say anything I ever did in film would be something I'd use the word proud about. I've done better work in the theater.

I'd hate to see any film I'm involved in fail, especially artistically but also business-wise.

I'm a little bit of a fabric lunatic.

I'm more comfortable with whatever's wrong with me than my father was whenever he felt he failed or didn't measure up to the standard he set.

I'm not a control maniac.

I'm not a psychiatrist. I'm not treating patients.

I'm not a very skeptical person.

I'm supposed to be a pretty good theater actor.

I'm very much a typical midwesterner, and I don't think the condition is curable.

I've permitted myself to learn and to fail with some regularity. And that is probably the one thing I was given, and that I'm still grateful for.

If you're too smart it can limit you because you spend so much time thinking that you don't do anything.

Imagine how asleep or utterly unperceptive and clueless you would have to be not to see yourself as absurd for the most part.

In New York in the Forties or Fifties, everybody's in a suit, an overcoat and a hat.

It never occurred to me to be an actor.

My father was an exceptionally strong influence on me.

My life before children I don't really remember. I've heard references to it, but I really don't remember.

Nothing you do particularly matters. But I'm not sure that's a great excuse for doing it poorly.

Politics is not really my thing.

Scary monsters are like Hula Hoops. They come in and out of fashion.

The projects I look for to produce or direct would not be ones in which I would want to act.

There's a reason screens are only this thick.

Things are so much global and Americanised.

Unlike my grandfather or my brother, I've actually been able to make some money at a racetrack.

Where women are concerned, the rule is never to go out with anyone better dressed than you.

You can be a mason and build 50 buildings, but it doesn't mean you can design one.

You can't take a play someone has directed and do whatever you want with it.

Tags: Directed, Someone, Whatever

You have to do things people see or you don't get to do anything.

You know, I'm really not interested in someone telling me that something's good or bad.

Actors generally get to do things you probably shouldn't do in real life - well, at least as much as one might like to or be tempted to. Though I suppose a lot of actors just go ahead and do it, don't they?

I think I was born at a time when an American male had so many advantages and opportunities that weren't available to men before or after, just a very brief period.

I was a very good baseball and football player, but my father always told me I was much more interested in how I looked playing baseball or football than in actually playing. There's great truth in that.

It's tough to figure out how do we compete in Europe and North America, when obviously a living wage for us is very different than a living wage in Indonesia.

People get up, they go to work, they have their lives, but you'll never see the headlines say, 'Six billion people got along rather well today.' You'll have the headline about the 30 people who shot each other.

Quite often - a lot of the work I had done had been extensively with women. Most especially in the theater, but also quite often in the movies. That has its own delights, and maybe pitfalls too.

'Secretariat' was such a magnificent animal, unbelievably beautiful and powerful. It's always nice to see something that close to perfection, a reason to celebrate.

Sigmund Freud said we act out our own dreams, but if you are only an actor you are not acting out your own dream. You are simply participating in someone else's dream.

Some directors expect you to do everything; write, be producer, psychiatrist. Some just want you to die in a tragic accident during the shooting so they can get the insurance.

The most evocative thing to me is probably when a writer and a group of performers can collectively put together something compelling that asks the really simple question: 'How do we live?'

We have a tendency to think everyone's idiotic and everyone's only doing something idiotic, and the world is controlled by a not-so-secret group of morons. There's great truth in that, I suppose, but then it's also not true.

Well, I design costumes because I started with the theater in Chicago, but somehow a few lines just sort of fell to me to do it. And I studied it in school and I always liked it.

When you do a really good play, the audience and the performers are looking into the same looking glass, the same microscope. And the specimen they are looking at is human life and that's why I do it, that's why I like it.

When you think of how history is revealed, we know certain things to be facts at certain periods of time, which turn out not to be so factual as time marches on.

You can't work in the movies. Movies are all about lighting. Very few filmmakers will concentrate on the story. You get very little rehearsal time, so anything you do onscreen is a kind of speed painting.

I'm more likely to lose my temper on a film set than almost anywhere. Often the level of idiocy is so exalted that it's impossible to comprehend.

I wouldn't describe myself as lacking in confidence, but I would just say that - the ghosts you chase you never catch.

It's not a gift of mine, but one given to me, to be able to criticise myself and not be crushed, by myself or by others.

Theater is so ephemeral, and I love that.

I don't understand how somebody wouldn't have a sense of humor about themselves.

I don't want to be boring. But that's not always easy.

If you don't interfere with me, I'll always do something really good.

Even if you do succeed most people wouldn't notice anyway.

I can see how, given a certain degree of sensitivities, proclivities and rage, I could have ended up differently.

I don't care what other people think. I don't think it matters.

I don't lose my temper very often now, and if I do, it's well deserved.

I prefer to conduct my life based on how I treat people.

My father was a very contradictory man.

Of course it's trivial, but then most things are.

People always say life is short. I've never been convinced of that - mine seems to have a tendency to go on and on.

The world is ruled by violence, or at least the imminent threat of violence. It always has been.

A dog that has rabies probably will do things it wouldn't do if it didn't have rabies. But that doesn't change the fact that it has rabies.

As an actor there are no drawbacks.

Every country has their problems.

Failure's a natural part of life.